Nagaraj Shetti of HDFC securities said the overall weekly chart pattern is indicating a possibility of minor upside bounce, which could be a sell-on-rise opportunity in the market

The index registered a bearish candle on daily and weekly charts, which resembles a hammer and bearish belt hold pattern, respectively.

"Although Nifty is trading in the red, a majority of the momentum oscillators are in the oversold zone. The possibility of a bounceback cannot be ruled out," Shabbir Kayyumi, Head - Technical & Derivative Research at Narnolia Financial Advisors told Moneycontrol.

At the same time, the index has managed to recover intraday losses from the day's low point and formed a pin bar candle that can be called as a trend reversal pattern, he added.

Nagaraj Shetti, Technical Research Analyst at HDFC securities also said the overall weekly chart pattern is indicating a possibility of minor upside bounce, which could be a sell-on-rise opportunity in the market.

Maximum Call open interest (OI) of 41.55 lakh contracts was seen at the 11,000 strike price. This will act as a crucial resistance level for the February series.

Maximum Put open interest of 32.12 lakh contracts was seen at the 10,700 strike price. This will act as a crucial support level for the February series. 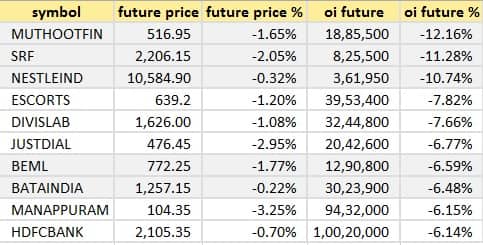 Jakharia Fabric: Overskud Multi Asset Management Private Limited purchased 28,000 shares of the company at Rs 188 per share on the NSE.

Rajnish Wellness: Dhwaja Shares & Securities Pvt Ltd bought 1.02 lakh shares of the company at Rs 182.26 per share on the BSE.

TRF: Board meeting is scheduled on February 20 to consider certain matters in relation to the terms and conditions of the issue of NCRPS, including fixation of the issue price for the NCRPS to be offered in the issue.

Welspun Enterprises: The meeting of the equity shareholders of the company to be held on March 19, in the matter of the Scheme of Amalgamation of Anjar Road Private Limited with the company and their respective shareholders and creditors.

MEP Infrastructure Developers: Earnings Call with analyst(s) is scheduled to be held on February 18 to analyse financial results and company's performance for the third quarter and nine months ended December 31, 2018.

Sterling Biotech: Meeting of the 12th Committee of Creditors of the company is scheduled to be held on February 20.

Birla Precision Technologies: Board meeting is scheduled on February 22 to consider the issue of shares on preferential basis, issue of shares to eligible employees under Employee Stock Option Scheme 2019 and any other business items.

Avanti Feeds: Audio Conference Call for investors will be held on February 19 to discuss the un-audited financial results for the quarter ended December 2018.

Schaeffler India: Management of the company - Dharmesh Arora, Managing Director & CEO and Satish Patel, Director-Finance & CFO will be meeting institutional investors on February 18 to discuss the earnings and results for the quarter and year ended December 2018.

Voltas: Company's officials will be meeting FidelityManagement & Research (FMR), HK and Morgan Stanley on February 18, and will be attending Kotak Securities Conference on February 19.

ITI Limited: Company's officials will be meeting with certain financial/institutional investors on February 18.

Mahindra Logistics: Company's officials will be meeting analysts/investors on February 18, 19 and 20.

Mahindra and Mahindra: Company's officials will be meeting analysts/investors on February 18, 19 and 20.

Eicher Motors: Company's officials will be meeting analysts/investors on February 18 and 19.

Pidilite Industries: Company's officials will be meeting analysts/investors on February 19.

Tata Motors: Company's officials will be meeting analysts/investors between February 18 and 22.

PNC Infratech: Company received an order from PWD for a project worth Rs 186.48 crore.

Religare Enterprises: Board approves raising up to Rs 500 crore via NCDs.

Tech Mahindra: Board to consider buyback of shares on February 21.

The company has also withdrawn scheme application filed with National Company Law Tribunal for the proposed scheme of Merger by Absorption between subsidiary Tech Mahindra Growth Factories Limited with the company.

Yes Bank: RBI letter pulls up bank for February 12 press release claiming nil divergence. RBI said it takes issuance of press release seriously as bank's risk assessment report was confidential and should not have been divulged.

Zee Entertainment to SEBI: No pending information, announcements that may have a bearing on company's operational performance, stock price/volume behaviour. SEBI had asked if the company had made/planned to make any announcement that could have an impact on stock price.

Jet Airways: Company looking to raise about Rs 4,000 crore through rights issue, according to CNBC-TV18 sources.

TRF: Board approved issuance of non-convertible redeemable preference shares to Tata Steel, on a private placement basis for an amount not exceeding to Rs 250 crore.

Nahar Industrial Enterprises: ICRA revised its long-term and short-term rating for Rs 1,471 crore bank facilities of the company to A- and A2+ from A and A1 respectively. The outlook on the long-term is stable.

Aurionpro Solutions: In order to focus on the cybersecurity business of the group, Samir Shah has resigned as a Director and Global Chief Executive Officer (CEO) of the company.

Sanghi Industries: ICRA has reaffirmed its credit rating for company's non-convertible debentures of Rs 258 crore and Rs 425 crore worth of bank facilities.

Cyient: Acquisition of Cyient DLM Private Limited has been completed.

Lumax Industries: Board decided to put an in-house electronic facility for manufacturing of PCBs (a critical part to lighting systems) for its captive consumption, keeping in view the increased focus on electronic content in the automobiles, due to requests from OEMs.

Garden Silk Mills: One of its financial creditors, State Bank of India (SBI), a member of consortium of banks has initiated action before Debt Recovery Tribunal (DRT), Ahmedabad for recovery of dues wherein DRT has granted ex-parte relief to SBI and directed the Company, not to alienate and transfer the hypothecated and mortgaged properties.

Sai Baba Investment And Commercial Enterprises: Company fixed April 1, 2019 as the record date for the purpose of consolidation of 10 equity shares of Re 1 each into 1 equity share of Rs 10 each.

Sadhana Nitrochem: After becoming aware of erroneous rating, the company had written back to CRISIL instructing them to remove the rating. On January 11, 2019, CRISIL has removed the rating from their site.

Reliance Infrastructure: V R Galkar ceases to be Director of the company on completion of his tenure.