Punch-drunk? Fifteen stocks to help you survive the market’s blows

Moneycontrol attempts to identify stocks that wise investors should use to duck and weave through this particular storm.

The Indian stock market is like a boxer who has taken it on the chin through the year, only to come back swinging each time. It’s been almost as if each blow of bad news has been a spur to greater aggression. But the last, particularly vicious, one-two – weak macro data on top of weak earnings – has left it tottering. Even the most optimistic are now asking if there’s a period on the ropes, and the pessimistic are fearing a throwing in of the towel.

From a life-time closing high to the low point in September, the correction has been to the tune of 4.1 percent, not significant when seen in the context of a 28 percent domestic liquidity-driven rally from post-demonetisation lows. But this cannot be construed as a blip.

Moneycontrol attempts to identify stocks that wise investors should use to duck and weave through this particular storm.

The barrage of bad news

Markets took the disappointing Q1 FY18 earnings in their stride to touch life-time highs. However, that was just the beginning. Macro data weakness that included a weak first-quarter GDP print and a soft IIP number was accompanied by firmer inflation and a weak rupee, thereby virtually dashing hopes of an imminent rate cut.

While the economy appears to be gradually coming out of the impact of demonetisation, the GST-led weakness is far from over. Amid the myriad headwinds, the ferocity of FIIs selling also deserves attention. 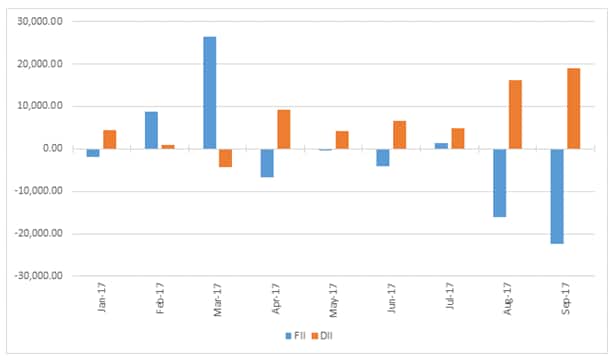 What not to buy?

Weak growth, absence of private sector capex, further stress for the banking system and a tardy pace of job creation are trends that Indian investors have to live with for a while. Can markets still justify the valuation of 21X FY18 earnings?

While we do not wish to hazard a guess on the levels of the market, we feel companies with strong linkages to domestic growth, private capex and softer rates might not find favour with the investors. In the recent correction, some high quality names have fallen thereby opening up a window of opportunity. We have carefully selected a set of fifteen companies to weather the impending uncertainty in the markets.

Post RERA (real estate regulatory authority) and with the IPO (initial public offer) money, Capacit'e, which is into construction of high rise buildings mainly catering to institutional clients, is expected to speed up execution. It intends executing current orders in hand of worth Rs 4,500 crore over the next 2-3 years. Strong earnings growth, excellent balance sheet and quality of management makes it a worthy addition to the portfolio.

With past issues now easing and a consistent increase in coal volumes and realisations led by improving fundamentals of the power sector, Coal India is a good contrarian bet, especially since the valuation is undemanding. At the current market price, the stock is offering a dividend yield of close to 5 percent.

Cochin Shipyard is sitting on a healthy order book of over Rs 3,000 crore. It will deploy its IPO money over the next few months, which will allow it to execute some of the larger projects. The company will further unlock its potential in the defence manufacturing space with the expansion of capacity in repairing and manufacturing of ships.

In the IT space, we like Cyient as it has a large exposure (about 54 percent) to relatively under-penetrated engineering services and strong client relationships. It has the least exposure to US H-1B visas and is relatively immune from the difficult transition that the traditional IT companies are undergoing.

HDFC Bank, now the largest private sector bank by assets, has built an enviable retail franchise both on the asset as well as liability side. With public sector banks fast vacating the lending space, it is capturing market share at an aggressive pace. Armed with strong risk management, it has negotiated several past down cycles well.

The home textile major is poised to generate better earnings on the back of a gradual increase in utilisation of its expanded sheeting capacity, completion of backward integration by Q3FY18, asset-light retailing, and greater focus on margin-accretive branded products.

With best cost optimisation, asset-light model, significant capacity addition plans, and aspirations to foray into long-haul international market, InterGlobe is well positioned to capture the heady growth in Indian skies. The recent weakness on the back of firmer crude and temporary issues with A320 neo engine opens up an opportunity to accumulate this growth story at a reasonable valuation. 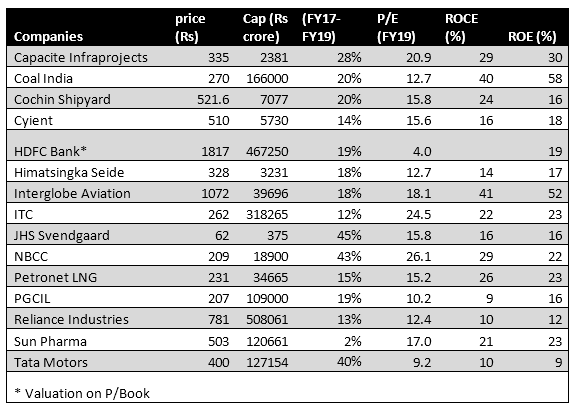 We are enthused by ITC’s increasing exposure to non-cigarette business wherein the company targets a turnover of Rs 1 lakh crore from the new FMCG businesses by 2030. Its focus on integrating value chain from farm to consumer in the perishable segment aids its medium-term growth trajectory. Further, ITC is currently trading at a multi-year low valuation premium to Nifty (5 percent vs 12 percent average) making it an attractive level to enter.

JHS Svengaard, a contract manufacturer for Patanjali and Dabur, brings high earnings visibility as it benefits from the improving market share of its key end-clients in oral care market. The company has recently raised its toothpaste manufacturing capacity, which along with newer contracts from Patanjali should aid earnings growth.

NBCC, which is into construction of government projects, has got superior earnings visibility on the back of a strong order book of about Rs 80,000 crore, almost 13 times its current revenue. With the stepping up of execution, we see visibility of 30 percent earnings growth annually. The company has zero debt, operates with negative working capital and has a good track record of dividend payment.

Petronet LNG, which operates LNG terminals at Dahej and Kochi, should reap the benefits of lower international LNG prices, thanks to the success in negotiations with the sellers. We see improved volume visibility from demand-supply mismatch and increased demand for cleaner fuels. This, coupled with stability in regasification charges, should support earnings.

Power Grid, which operates a regulated power transmission business characterised as non-cyclical with strong balance sheet, is worth considering as a core stock. It is offering a dividend yield of close to 1.5 percent and strong earnings visibility backed by government focus on connecting rural India and deployment of additional equity in the business. The company is sitting on a capital work-in-progress of close to Rs 35,800 crore, executable over the next two years.

Reliance Industries should reap rewards from completion of ongoing capex in core projects (petcoke gasification, polyester expansion, off-gas cracker and ethane sourcing). Recent global developments are positive for refinery and petchem margin. The monetisation of Jio could be the incremental positive surprise.

Sun Pharma is in the midst of a painful adjustment with pricing pressure in US generics business and a key plant catering to US markets under US FDA (Food and Drug Administration) scanner. While FY18 is going to be a difficult year, its investment in speciality business should start bearing fruits from FY20.

Tata Motors, a focus company for turnaround for the new dispensation at Tata Sons, should see its impact on the domestic business. Growth prospects of JLR (Jaguar Land Rover) on the back of a slew of new launches, a focus on energy-efficient products, a strong position in the Chinese market and a reasonable valuation are the added positives.