In muted earnings expectations for Q1FY21, beats were much higher than misses and that was one of major reasons and confidence booster for equity market not only in India but globally.

After recording a high of 12,430 in January, Nifty fell 40 percent to 7,511 in March due to COVID-19 crisis. Many countries around the world announced partial or complete lockdowns in the first half of the year to contain the spread of COVID-19. This brought economic activities to a jolting halt hurting corporate earnings.

From the low point, the index jumped 50 percent to hit 11,300 in July, thanks to the liquidity pumped in by global central banks. Other factors that were at play are progress on vaccine for COVID-19, increasing economic activity during unlock and better-than-expected-to-in-line earnings growth in June quarter.

Experts feel the valuations definitely turned expensive, but on the other hand, the economic environment has also started improving.

"Equity valuations after hitting -1 SD in March 2020 have swung to +1 SD – a function of the sharp rise in stock prices, equally sharp drop in post COVID-19 earnings and time value (four months rolled forward). In our view, evidence of a slow but surely improving global economic environment, earnings beat in Q1FY21 so far and continued commitment by central banks for further QE while maintaining record low interest rates – have the potential to keep markets expensive in the near term," ICICI Securities said.

Equity markets have continued to be expensive in the post QE era (post 2010) with shallow corrections, it added.

US Federal Reserve and the ECB, in their latest policy meet in July, remained committed to quantitative easing (QE) with an accommodative stance and maintained low interest rates.

In fact, there has been negotiations between Democrats and Republican for another stimulus package in the United States as the impact of first package of around $3 trillion announced in May has been reducing, which could lift markets further.

Having said that, ICICI Securities does acknowledge that the expensive P/E is also a function of bottom of the cycle earnings level (listed space PAT-to-GDP of around 2 percent in FY20) and other broader/balance sheet valuation metrics like Market Cap to GDP and P/B remain below average at 73 percent and 2.7x respectively.

Given the sharp rally, experts feel the upside from here on seems to be limited but select quality stocks could continue their strong journey along with outperformance in broader space compared to benchmark indices.

"Given the high P/E valuations, our 1-year forward returns expectation from the benchmark Nifty50 remains in low single digit, while select stocks will continue to generate alpha," ICICI Securities said. 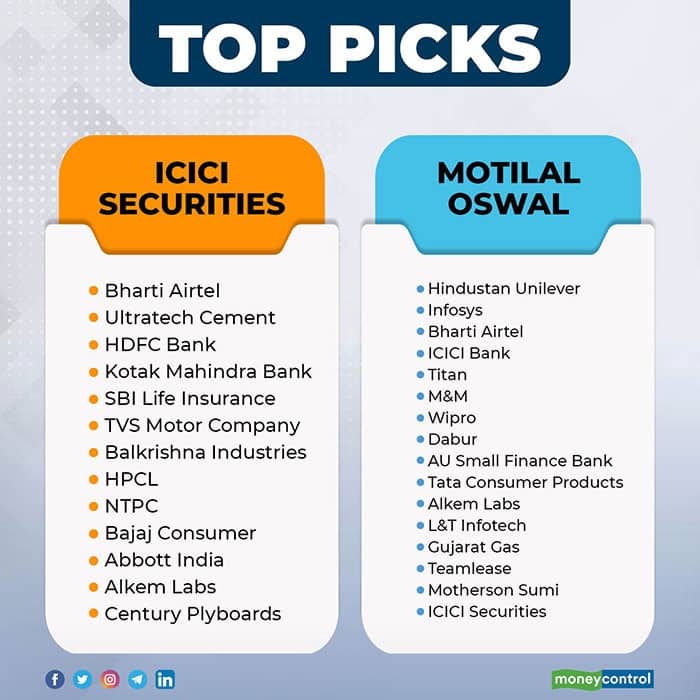 In muted earnings expectations for Q1FY21, beats were much higher than misses and that was one of major reasons and confidence booster for equity market not only in India but globally.

Motilal Oswal also in its August report said Q1FY21 earnings of 91 MOFSL Universe and 33 Nifty companies that had announced their results as of August 1, 2020 came in above expectations.

Motilal Oswal feels the strong cost control has been the defining theme for Q1FY21 earnings so far. "In these challenging times when demand is weak and uncertain, corporate India has employed the lever of cost reduction to alleviate the stress on the bottomline. More importantly, the corporate commentary does indicate MoM improvement from the complete lockdown in April (to May and June)."

Meanwhile, unlike Europe, China and the US, where the first wave of COVID-19 has peaked, India and parts of Latin America continue to register the highest additions of new cases, which is hampering faster economic recovery, feels the brokerage.

India reported more than 22 lakh confirmed infections with more than 45,200 deaths, as per Johns Hopkins University, while the globally infections reached 2 crore mark with over 7.3 lakh deaths.

But the good part so far is that the fear of second wave has not seen yet in peaked regions.

"Regions that have completed the first wave of COVID-19 (China, Europe and the US) have not seen any major second wave flare up till now. However, Latin America and Asia-Pacific are yet to peak out in terms of the first wave," ICICI Securities said.

In India, the high frequency indicators like PMI, Google Mobility, e-way bills, electricity etc showed that the recovery in July has been at a slow pace, but GST collections improved to Rs 87,400 crore and will allay concerns about rising fiscal deficit to some extent, the brokerage added.

Disclaimer: The views and investment tips expressed by investment expert on Moneycontrol.com are his own and not that of the website or its management. Moneycontrol.com advises users to check with certified experts before taking any investment decisions.
Sunil Shankar Matkar
TAGS: #Market Edge #Nifty #Sensex #Stocks Views
first published: Aug 12, 2020 02:04 pm