After a short-term correction, Dr Reddy's Laboratories has formed higher bottom reversal formation. The stock is consistently taking support near the 50 and 20 day SMA (Rs 4,192, Rs 4,227)

The Indian equity market reversed all its previous week's gains and closed with more than 2 percent loss following nervousness in global peers. Inflation worries remained at the fore after the Reserve Bank of India raised its inflation forecast for FY23 by 100 bps to 6.7 percent and US inflation reading came in at 40-year high of 8.6 percent in the week ended June 3.

Consistent FII selling, growth worries, imposition of some more Covid restrictions by China and oil hovering above $120 a barrel also dented the market sentiment. The market has fallen for the first time on weekly basis in the last four weeks.

The Nifty50 has broken not only the 16,400 level but also 16,250 levels during the last week, hence holding of 16,200 is expected to be crucial in the current week (which is important as FOMC meet and CPI inflation lined up this week) as breaking of which can take the index down to around 16,000 mark, experts said, adding the volatility has not moved significantly on higher side despite sharp fall on last Friday, so the possibility of holding 16,200-16,000 levels is likely to be high.

"The market is unable to show any kind of strength at higher levels but we are still not getting convinced with the weakness. We would rather reassess the situation in the first half of the forthcoming week and all eyes on crucial levels like 16,000 on the lower side and 16,400 on the upside," Sameet Chavan, Chief Analyst-Technical and Derivatives at Angel One, said.

The pragmatic strategy would be to stay light on positions, the market expert advised, suggesting to be stock specific as "we see a lot of whipsaws" on either side. "In fact, it has become a nightmare in trading stocks in the last couple of weeks," said Chavan who still hopes to see some recovery in coming days.

Here are the top 10 trading ideas by experts for the next three-four weeks. Returns are based on the May 13 closing prices:

The stock has initially given an Inverted Head & Shoulder neckline breakout above Rs 690 zone and further indicated a breakout above the Rs 750 levels with the bias maintained strong and has further upside targets of Rs 820-850 levels, keeping the stop-loss near Rs 730 levels. 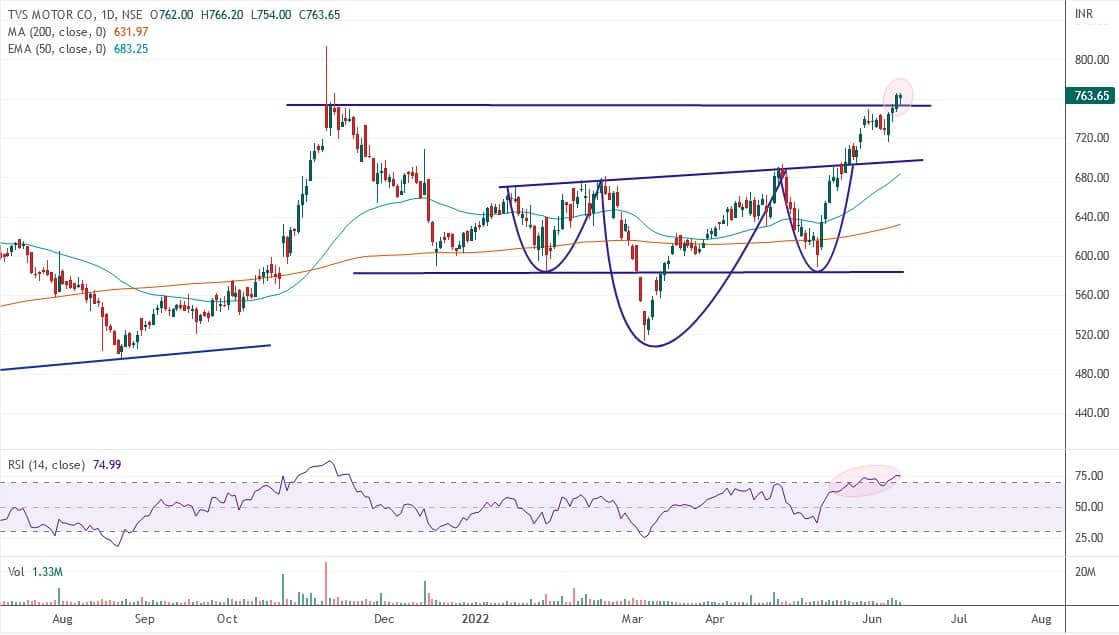 The stock after the decent correction has stabilised currently and maintained the support zone near Rs 3,530 levels and gradually picking up. A decisive move past Rs 3,530 would improve the bias and can anticipate for further upward movement for higher targets. 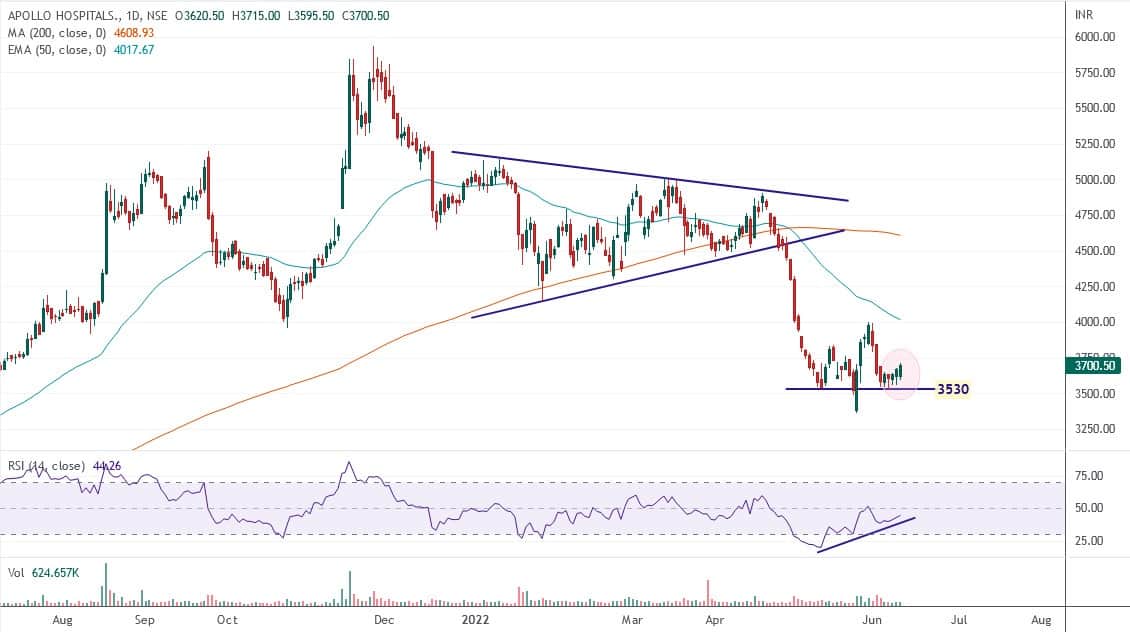 The stock has picked up well from the bottom made near Rs 418 levels near the trendline support indicated and after a short correction from Rs 485 levels again has taken support near Rs 450 levels to form a higher bottom formation pattern and regaining strength.

We suggest to buy and accumulate for further upside targets of Rs 490-520 in the coming days keeping the stop-loss near Rs 450. On June 9, 2022, the stock reversed after testing its horizontal support line and extended gain subsequently. Its daily RSI (relative strength index) has given buy signal post a bullish divergence, which signals the stock is on the verge of a turnaround.

In case of any decline, the stock will continue to find support around its horizontal trendline, which is placed at Rs 1,700.

In the past, the stock witnessed a sharp upmove after testing that Fibonacci Retracement level of prior upmove.

The key technical indicators are positively poised on the short-term timeframe chart. The stock has potential to move towards Rs 370 initially and Rs 388 subsequently.

On the lower side, the stock will find support around its prior swing low, which is placed at Rs 312.

In the last week, the stock breached its prior rising trend and formed a bearish pattern. On the higher side, the stock faced hurdle around its upper band of the falling channel.

The key technical indicators are in favour of the bears on the short-term timeframe chart. This could drag the stock towards its lower band of the falling channel, which is placed at Rs 165.

In case of rebound, the stock will continue to face hurdle around its upper band of the falling channel, which is now placed at Rs 226.

It witnessed fresh breakdown evident on its daily & weekly scale as the stock breaks below its 4 days prior swing support zone of Rs 101.50. A bearish Pennant formation on its weekly scale too indicates weakness to persist from here on until a firm reversal is not established on its weekly scale.

Immediate pattern target coincides with its 52-week low placed around Rs 90 which could be met in the next 2-3 weeks. Fresh shorts to be considered with a stop-loss at Rs 106. It was strong relative outperformer of the last week as it consistently maintained its shadows above its 5 DEMA (exponential moving average) & never closed below the same despite the persistent weakness across the market.

The recent consolidation on its daily scale looks like a bullish flag in the making which suggests continuation of the on-going bullish sequence. The pattern indicates a price target up to Rs 220 which could be participated with a stop-loss below Rs 190. 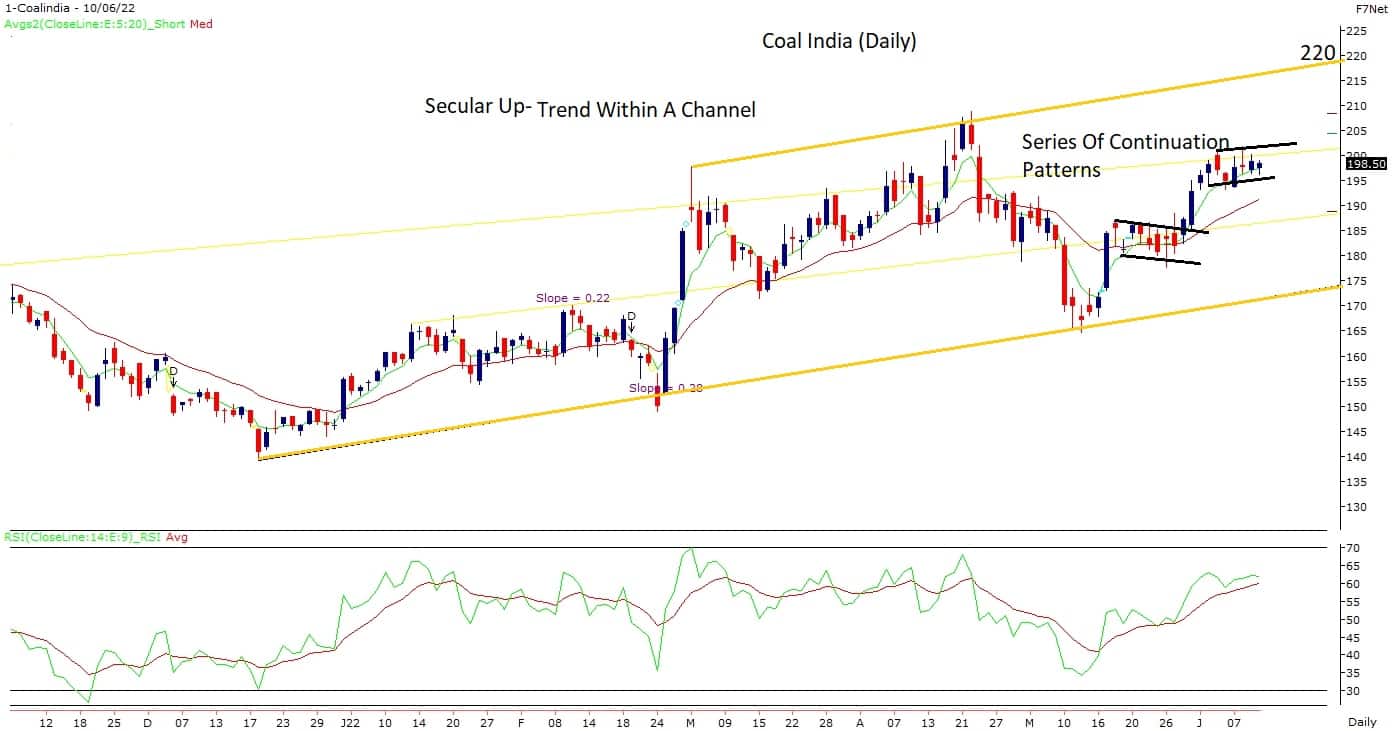 Occurrence of a Spinning Top formation on its weekly scale after a continued sequence of ‘Inside bar’ formations is a sign of diminishing strength. The stock has been facing stiff resistance around Rs 2,240 zone while its month RSI creeping lower below 80 in accordance with the on-going negative divergence since last 2 months.

We expect Adani Enterprises to retrace back below its 20 weeks EMA (exponential moving average) zone below Rs 2,020 as most trend strength indicators exhibit signs of distribution since last few weeks. 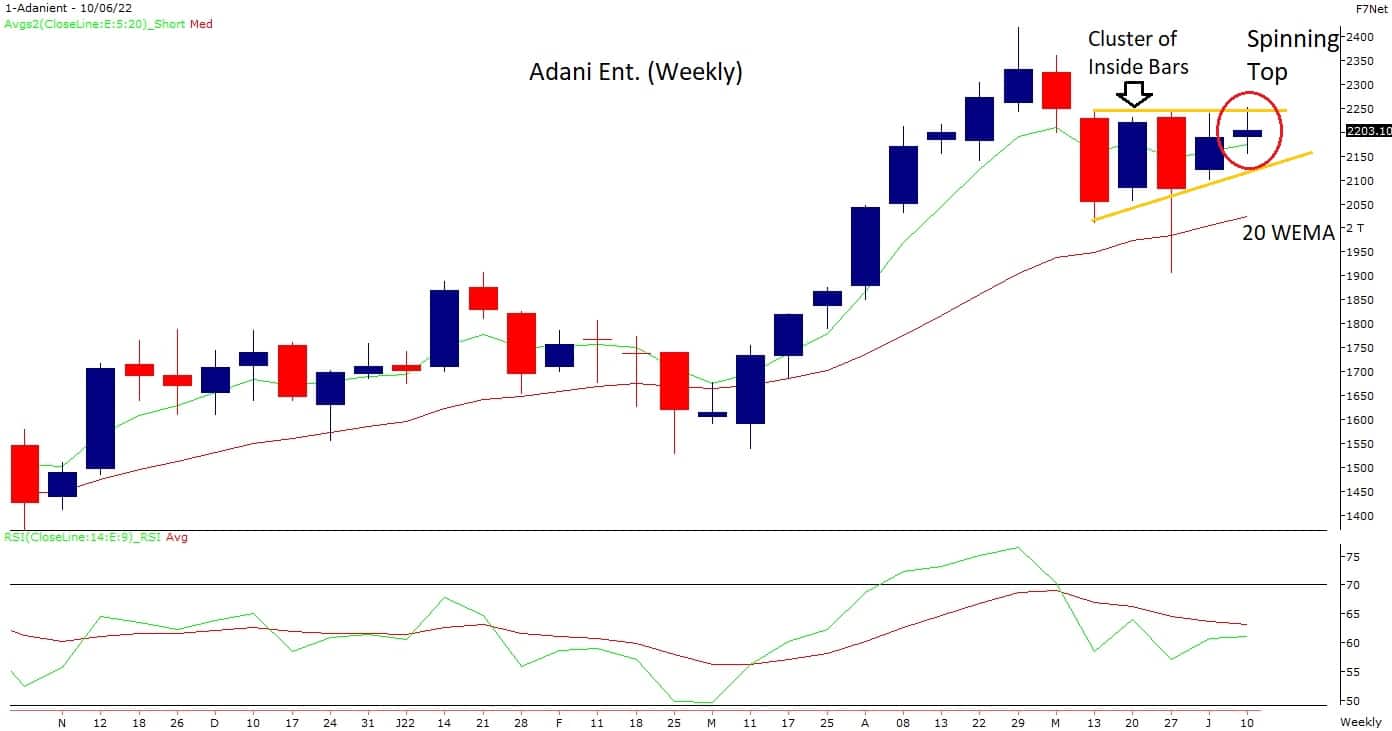 After a short term correction, the stock has formed higher bottom reversal formation. The stock is consistently taking support near 50 and 20 day SMA (Rs 4,192, Rs 4,227).

The short term texture of the stock is still in to the positive and strong possibility of fresh uptrend rally is likely, if it succeeds to trade above Rs 4,200 level.

Looking at the overall pattern it offers buying opportunity for the positional traders with a decent risk-reward ratio. The trend reversal move is likely to continue up to Rs 4,640. Currently, the stock comfortably trading below 200 days SMA (Rs 748) which is broadly negative. We are of the view that, the short term texture of the stock is bearish and as long as it is trading below the level of Rs 745, the correction wave is likely to continue. Below which it could slip up to Rs 680-675. 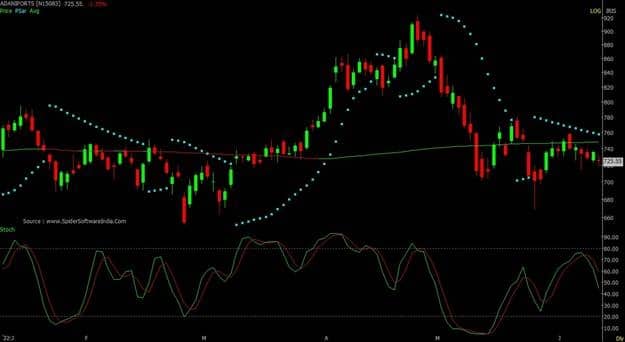