Upcoming Event:Join us for New HorAIzon from Oct 6-7, 2pm and be a part of exciting conversations on tech & innovation
you are here: HomeNewsIndia

Making the Narendra Modi government’s intentions clear on how it plans to revive the Indian economy in a post-COVID world, Finance Minister Nirmala Sitharaman presented a fiscal expansionary Budget on February 1.

After supply-side measures in the Aatmanirbhar Bharat set of announcements, Sitharaman in the Union Budget 2021-22 came out with a host of demand-side measures, looking to create jobs primarily through the infrastructure sector.

"The government gave proper attention to its responsibility towards fiscal sustainability while increasing the size of the Budget. Principles behind the Budget include expansion of new opportunities for growth; new opportunities for the youth; giving new dimension to human resource; infrastructure development and helping new sectors grow," Prime Minister Narendra Modi said after the Budget speech. The announcements included the highest-ever capital expenditure of Rs 5.54 lakh crore for FY22, a proposed development finance institution (DFI), and wide-scale asset monetisation by agencies like the National Highways Authority of India (NHAI) and the Indian Railways as well as an asset monetisation pipeline.

"A professionally managed development financial Institution is necessary to act as a provider, enabler and catalyst for infrastructure financing. I have provided a sum of Rs 20,000 crore to capitalise this institution. The ambition is to have a lending portfolio of at least Rs 5 lakh crore for this DFI in three years' time," the minister said in her Budget speech.

Stating that fighting the COVID-19 pandemic was the Centre’s biggest priority, Sitharaman also rolled out a Rs 2.46 lakh crore healthcare budget, with Rs 35,000 crore earmarked for the coronavirus vaccine programme.

Markets responded positively to the Finance Minister's expansionary stance. The BSE Sensex closed up 5 percent, while Nifty50 closed up 4.7 percent.

These measures mean that the fiscal deficit target for FY22 will be 6.8 percent of the GDP, while the estimate for FY 21 has been revised to 9.5 percent from 3.5 percent.

The decisions come days after the Economic Survey 2021-22 pushed for counter-cyclical fiscal policies to enable the economy to come out of the COVID-19 pandemic-induced slowdown. On the tax front, the minister exempted senior citizens older than 75 years from filing tax returns. The timeline for reopening of assessment under income tax returns was also reduced to three years from six years. The Finance Minister also exempted dividend distribution taxes for investing in REITs and InVITs.

She also provided an additional Rs 1.5 lakh tax deduction on loans taken to buy a house under the affordable housing scheme, with the deadline extended to March 31, 2022.

Sitharaman also announced a renewed thrust towards asset sales and privatisation after the false starts of the past few years, with a target of Rs 1.75 lakh crore. She said the initial public offering (IPO) of LIC will be completed in the coming fiscal, and that the Centre had identified four sectors as 'strategic' in which government will have a presence.

She also said the Centre will pare its stake in two state-owned banks and a general insurance company. 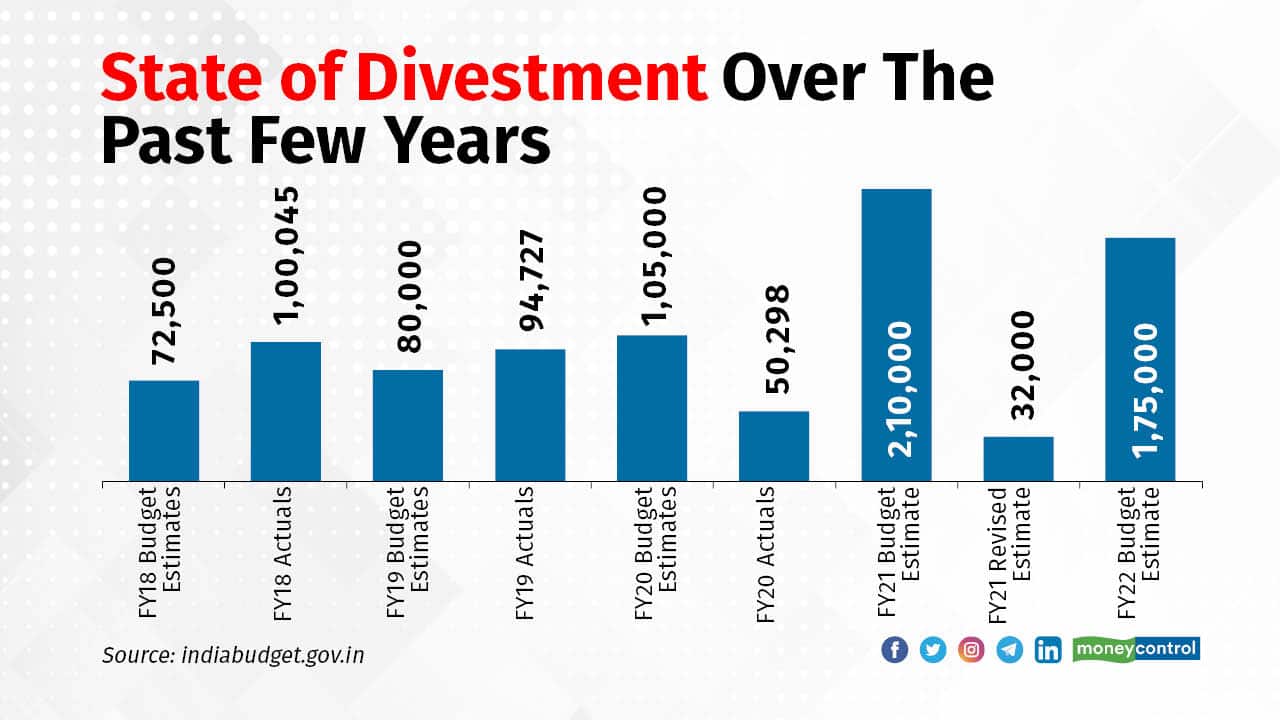 The budgeted capex for FY22 stands at Rs 5.54 lakh crore. For FY21, the Centre had budgeted its capital expenditure at Rs 4.13 lakh crore, which was later increased by Rs 35,200 crore.

From a fiscal deficit of 9.5 percent of GDP in FY21, the Centre will now follow a glide path, which will bring down the Budget deficit to below 4.5 percent of GDP by FY26. This was based on the suggestions of the Fifteenth Finance Commission, whose report for FY22 to FY26 was tabled in Parliament along with the Budget.

Small businesses bore the brunt of the economic slowdown. While large corporates bounced back to some extent, smaller businesses are still facing headwinds. For them, Sithraman announced a separate debt resolution framework. She also said gig and platform workers would get social security benefits. The minister allocated Rs 15,700 crore to the MSME sector.

Sitharaman also announced the creation of a ‘bad bank’ to take care of non-performing assets of banks and proposed recapitalisation of banks to the tune of Rs 20,000 crore

Amid raging protests against three new farm laws, the Finance Minister also announced a number of measures aimed at the agriculture sector.

She enhanced the agricultural credit target to Rs 16.5 lakh crore for the coming year. The allocations and corpus of Rural Infrastructure Development Fund and Micro Irrigation Fund were also boosted.