The average market capitalisation of BSE listed companies rose from Rs 146.58 lakh crore recorded on May 17 to Rs 152.71 lakh crore on May 24 which translates into a rise of Rs 6.1 lakh crore in just 5 trading sessions.

It was a historic week for Indian markets as both Sensex and Nifty50 hit fresh record highs, and investors' wealth rose by over Rs 6 lakh crore for the week ended May 24 as Mr. Market cheered the continuity of reform process and the end of political uncertainty, as Narendra Modi is set to become the Prime Minister for a second consecutive term.

The average market capitalisation of BSE listed companies rose from Rs 146.58 lakh crore recorded on May 17 to Rs 152.71 lakh crore on May 24 which translates into a rise of Rs 6.1 lakh crore in just 5 trading sessions.

The big outperformers were the small & midcaps which outperformed benchmark indices in the week gone by. The S&P BSE Midcap index rose 4.45 percent while the S&P BSE Smallcap index rallied 5.8 percent for the week ended May 24. 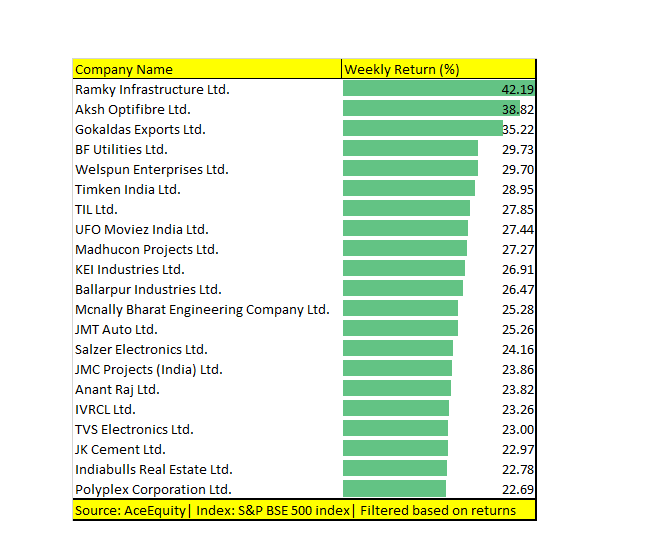 Most experts feel that the big outperformance could come from the broader markets, which are already down in double digits from their respective peak. The S&P BSE Midcap index is still down by about 14 percent from its 52-week high while the S&P BSE Smallcap index is down by over 19 percent from its peak of 17,517.

"The week gone by was historic in terms of massive volatility – implied volatility and India VIX both had registered record highs but soon normalized reflecting the emotional sentiment of the Indian investors in the stock market," Jimeet Modi, Founder and CEO, SAMCO Securities & StockNote told Moneycontrol.

"Investors must ideally avoid large caps as they are in the overvalued zone while selective beaten down mid and small caps could be bought into. As of now, a wait and watch approach should be followed by markets at least till the Monetary Policy and Budget announcement by the newly elected government," he said.

As many as 20 stocks in the S&P BSE Midcap index rose 10-30 percent which include names like Tata Power, Adani Transmission, Indian Bank, Adani Power, Wockhardt, Canara Bank, Reliance Power, and Adani Enterprises, etc. among others.

The Nifty50 crossed the 12,000-level for the first time ever during the previous week on political stability as the BJP-led NDA is set to form the government for a second consecutive term.

The price action formed a bull candle with a higher high and higher low and a bullish gap between (11407- 11592) below its base signaling strength and positive bias. The index has major support at 11500 levels.

"The faster retracement signifies a structural turnaround that makes us confident for an up move towards 12200 levels in coming weeks as it is the 138.2 percent external retracement of mid-April–May decline placed at 12142 levels," he said.

Why Subros is a good long-term bet?