As bulls keep tight control at Dalal Street, these 20 smallcaps rally 15-49% this week

FIIs also turn net buyers for the week after many weeks, buying more than Rs 2,000 crore while DIIs continued pouring money, purchasing more than Rs 800 crore worth of stocks during the week.

The market continued its run for the third consecutive week ended September 27 as bulls kept tight control at Dalal Street. This was thanks to a surprise cut in corporate tax rate and Trump comments raising hope for a potential US-China trade deal.

The Sensex and Nifty gained little more than 2 percent in the week gone by. Total gains in three consecutive weeks were 5 percent each after the government started taking prolonged slowdown seriously and announced several measures to get the economy back on track.

The broader markets - BSE Mid-cap and Small-cap indices - also gained a percent each, but underperformed frontliners despite a sharp 10 percent cut in the corporate tax rate, which showed how serious demand slowdown is.

In fact, if we look at stock performance among BSE 500, Mid-cap and Small-cap indices, the gainer and loser ratio is 1:1. This means the slowdown may continue for a while and fiscal measures may work with some lag.

Experts said the sentiment may gradually improve over some period. They expressed confidence about strong recovery in the broader space from next year onwards, following a rally in Large-caps.

"Historically, in the first leg of a bull market, top quality frontline stocks move first. Only when the bullish sentiment spreads wider and deeper do the small and midcaps find investor favour. This is because the risk appetite increases and large-cap stocks would have become pricier. As and when the bull market develops, the midcap shares will perform," Umesh Mehta, Head of Research, Samco Securities told Moneycontrol.

But there were stocks that reacted sharply during the week and outperformed all indices. Top 50 stocks in the BSE Smallcap index showed double-digit growth and top 20 stocks rallied between 15-49 percent. 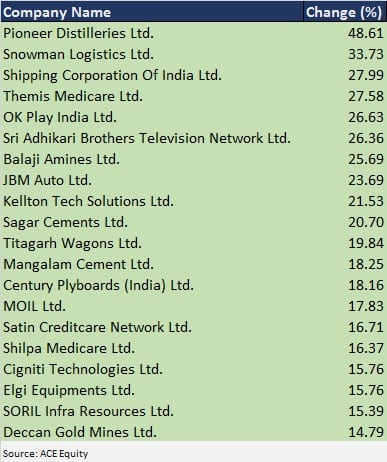 Among BSE 500 as well, the top 20 stocks rallied 12-28 per cent. These included IDBI Bank, BPCL, GIC Re, Deepak Fertilisers, Siemens, RITES, BEML, and Manappuram Finance among others.

Among sectors, BSE Bank, Capital Goods, Energy and FMCG gained 3.5 percent this week, but if we include gains seen on September 20 (last Friday) then it would be doubled.

Modi added, "The result season would bring ebullience but that could be short-lived unless ground level consumption pattern improves. Thus, the tax effect should be ignored while assessing the results of corporates."

Investors should wait for a correction in the market before investing, he advised.

FIIs also turn net buyers for the week after many weeks, buying more than Rs 2,000 crore while DIIs continued pouring money, purchasing more than Rs 800 crore worth of stocks during the week.