34 stocks exiting F&O segment today collapsed in a heap in 2019; what should you do?

Most of the companies have high debt and are facing structural issues, hence, investors should avoid catching the falling knife even at current levels, suggest experts

On June 28, 34 stocks will no longer be part of futures and options (F&O) segment on the NSE. The exchange, in a notification in April, had said that it would not issue F&O contracts for these stocks once June series expires.

Though NSE's decision may not have been a cause of their journey in the red, these stocks certainly extended their losses after the notification was released.

Timely action would have saved investors from any incremental losses seen in almost 90 percent of these stocks.

Table: Returns of 34 stocks that will be excluded from F&O segment from July series. 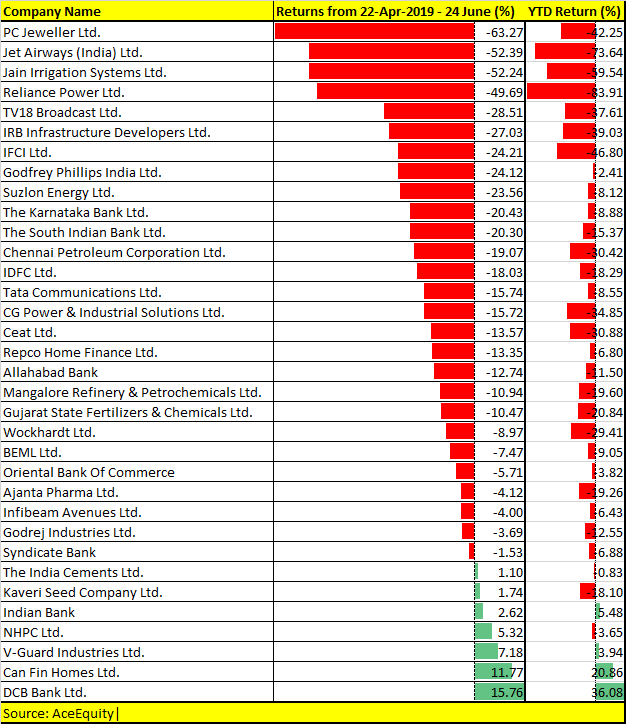 Most of the companies have high debt and are facing structural issues, hence, investors should avoid catching the falling knife even at current levels, suggest experts.

“Many companies getting out of F&O has been reeling under high debt burden, to an extent they are unable to service these debts. These firms may find it difficult to conduct business as usual, if they cannot raise the resources soon,” Atish Matlawala, Sr Analyst, SSJ Finance & Securities told Moneycontrol.

“In our opinion, investors should not trade in companies that are highly leveraged and exit position in these companies rather than hoping that the stock will recover,” he said.

Matlawala though said that few companies like BEML, CEAT and Godrej Industries that are facing tough times currently have the potential to reclaim the lost glory in the next couple of years.

"Once these stocks are out of F&O, volatility in these stocks will subside and our advice to an investor is to buy these stocks in the cash market and hold for the next 2-3 years," he said.

“If existing security fails to meet aforesaid continued eligibility criteria for three months consecutively, then no fresh month contract shall be issued on that security. However, the existing unexpired contracts may be permitted to trade till expiry and new strikes may also be introduced in the existing contract months,” said Matlawala.

“These eligibility criteria’s were made more stringent to keep only the highly liquid stocks in F&O. There may be a further exclusion of some stocks on this basis. On the contrary, we are seeing certain better-performing stocks that are qualifying to enter in F&O segment,” said Amit Gupta, Head of Derivatives at ICICIdirect.