It may be raining job offers for techies in India, but it is a talent war for tech firms

As one executive put it: It is better to hire expensive, great talent and be tough in their evaluation, than to hire average and end up never letting them go because you can't find talent at that salary

There are hundreds of jobs that are up for grabs across IT and tech firms, yet they are struggling to get their hands on quality talent and hence are willing to pay a premium when they do.

“There is a war for talent,” said Salil Parekh, CEO, Infosys, in an event last month, on the demand and talent landscape in the IT industry, amid the pandemic.

The industry has been seeing demand far outstrip supply over the last few months.

There are hundreds of jobs that are up for grabs across IT and tech firms, yet they are struggling to get their hands on quality talent and hence are willing to pay a premium when they do.

According to industry experts, the hike is anywhere between 20-40 percent — more than double of what they had seen in 2019.

Take, for instance, the plight of a Bengaluru-based IT executive in a top IT firm, looking after the banking domain. The executive is looking to hire for the role of full-stack developer and a dozen other technology and banking domain roles for months now at the mid to senior level.

So far, it has not been as rewarding as one would expect it to be. “Hiring talent has been challenging,” he admitted. Adding to his frustration was a recent instance where one of the recruits, who was supposed to join in March, rejected the offer a week before his date of joining.

“It would seem that he got a double increment in the company he was working for after showing the hike we had offered him,” he lamented. The project still has close to a dozen roles open and the search is still on for talent.

Money, or rather compensation, has been a deciding factor, and techies are clearly taking full advantage of the situation.

This is what Amrish Rau, CEO, Pine Labs, a fintech firm, pointed out recently. “Salary expectation is at an all-time high. Young talent with good work ethics is getting amazing offers. It is better to hire expensive, great talent and be tough in their evaluation, than to hire average and end up never letting them go because you can't find talent at that salary.”

Salary expectation is at an all time high. Young talent with good work ethics are getting amazing offers. Its better to hire expensive, great talent and be tough in their evaluation, than, hire average and end up never letting them go because you can't find talent at that salary

This, clearly, is putting IT and tech firms in a fix.

Why is it happening now?

Demand. There could not have been a better word to describe the phenomenon. Krishna Kumar of Simplilearn, a Bengaluru-based edtech firm said: “In my 20-year career, I have never seen demand this high.”

Look at the large scale-openings across the sector.

As of March 22, Accenture has 18,603 vacancies. This is almost 6 times more than the 3,000 jobs openings the company had six months earlier. Other firms are hiring as well. IBM India has listed about 4,491 jobs for hiring. Infosys is hiring for over 650 roles and Wipro 1,835. TCS has about 1,290 active roles to be filled. Kumar said that the company itself has not been able to find the right candidates for the 150 vacancies in the technology roles.

Going by the industry commentary, the demand is sustainable at least in the coming months and has clearly become a game changer.

Though reskilling has helped to some extent, as HCL Tech’s Chief Human Resources Officer VV Apparao said, this is not enough to fulfil the demand that is coming in.

While HCL Tech has been able to double the internal fulfilment ratio to 60 percent now, for the remaining roles, it needs to hire laterals, he added.

For this talent, companies will have to pay a premium or match the salaries their peers are offering to retain them.

Kamal Karanth, co-founder, Xpheno, a specialised staffing firm, said that unlike in 2019, companies have to shell out a premium to retain skills that are most in demand, such as full-stack developer, data analytics and machine learning. 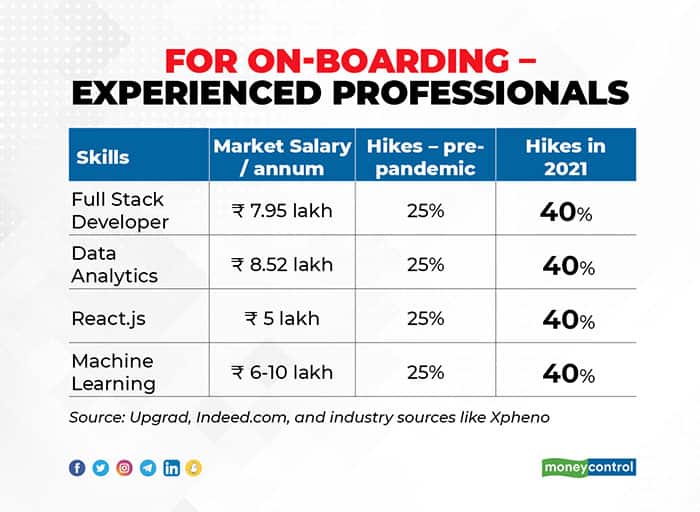 For instance, while the hike to retain talent was in the range of 10-12 percent before the pandemic, it now stands at 25 percent for the experienced workforce between 4-12 years.

In case the company is hiring laterals, something that is on a high right now, the wage hike for the niche talent is about 40 percent.

If this is not enough, companies will also have to factor in the increased dropout rates. Multiple employees who were given offers did not take them up and even when they did, they dropped out if they got a better offer.

Experts say these dropout ratios have spiked as well. It does not help that well-funded startups are more than willing to offer salaries way above the market price, making it tough for IT firms to match.

The recent announcements companies made with regard to salary increments and 100 percent variable pay are to some extent aimed at addressing employee retention.

Recently TCS announced that the company would kick off its salary increment cycle for FY22 effective April 1, 2021. This is the second increment cycle in six months. According to company sources, the 4.7 lakh TCS employees will get an average increment of 12-14 percent and this will be in line with the company’s record.

The same week, larger rival Accenture said it would give its employees below the managing director level a week of their base salary as a bonus. Cognizant, according to a TOI report, has set aside $30 million to retain employees. 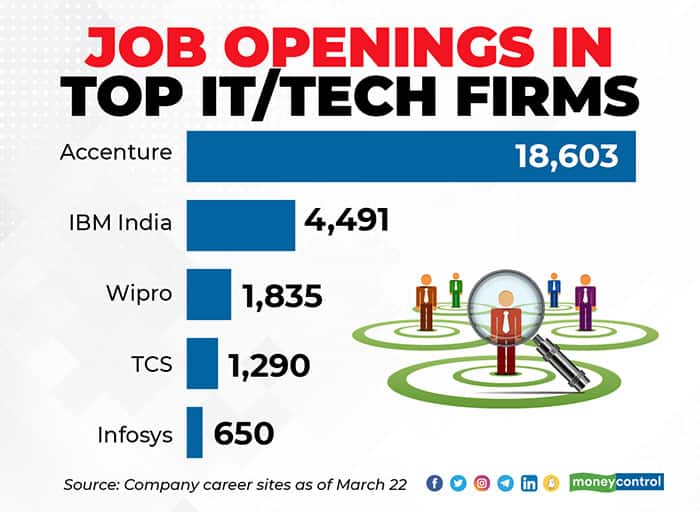 These companies are also working with edtech firms such as Great Learning to hire lateral resources for project execution. “Over the last six months, we have also been witnessing a significant increase in the number of corporates engaging with us to hire talent from Great Learning programmes,” co-founder Hari Krishnan Nair told Moneycontrol.