Kombucha, a sweet and tart fermented beverage, is said to fight infections and help lose that pesky belly fat. Is this drink worth the hype?

Kombucha is a fermented tea purported to have health benefits, mainly boosting immunity and improving gut health. (Above) Mango Bliss Kombucha by HappyBooch.

Kombucha has been around for over 2,000 years. Though its origins are veiled in mystery, kombucha is believed to have its roots in the Far East (cha is Chinese for tea), where it was believed to have amazing health benefits. Some say kombucha was brought to Russia by Manchurian traders. What’s clear is that ancient Asian warriors consumed it as a strength tonic before a battle. It became a peasants' drink in Russia and parts of eastern Europe, and in the 20th century, it became a supposed immunity-booster for HIV patients during the AIDS epidemic. Today, as part of the health food market, this ready-to-drink, carbonated beverage is one of the fastest-growing segments of the functional beverages category.

So what exactly is kombucha?

Fermented drinks are not new to Indians. We already have the winter delight kanji made from purple carrots, ragi-based ambali, and handia, a popular rice fermented drink of Odisha. But kombucha is different. It’s a fizzy, fermented tea made using a live culture called SCOBY (symbiotic colony of bacteria and yeast).

“We brew green, white or black tea, sweeten it with raw organic sugar and then leave it to cool. Next, we add the SCOBY. SCOBY basically makes the magic happen by chomping up the sugar in the tea (over a seven- to 20-day fermentation period, depending on ambient temperature and the size of the batch)... Finally, we infuse the kombucha with fruits and herbs to produce unique signature flavours,” explains Nitin Gandhi of Bombucha, one of many Kombucha brands in India now.

From there, bottled kombucha is placed in a refrigerated environment to slow down the carbonation and fermentation processes. The finished product often has small remnants of the bacteria mix floating in it, which sounds unappealing but is not much different from finding some sediment in your wine. If you are wondering what this sparkling golden beverage tastes like? Well it’s a cross between Champagne and vinegar, and yes it’s an acquired taste. And a teeny-weeny bit alcoholic, too, but not enough to make you tipsy. Most brews contain no more than 0.5% alcohol by volume. That’s about one-eighth the alcohol content of a light beer.

And while kombucha makers say it is a low-sugar drink, it's a good idea to check the label, and ask your doctor before you drink it if your are diabetic or prediabetic.

The kombucha story in India

“Back then it took a lot of effort to explain to consumers what kombucha was. Even in retail stores, there was no such product being sold. But when I launched HappyBooch at Nature's Basket, Mumbai, in 2018, we sold out within a few days. Today, they stock three other brands of kombucha because consumers come looking for these drinks,” says Sharma Gandhi, who brews her kombucha the old-school way in gallon-sized glass jars. Sampling kombucha (called booch shots) at farmers' markets has helped bring a lot of new customers to the category.

The accelerated interest in the beverage could also be attributed to greater focus on immunity and gut health post Covid-19. “Kombucha along with other fermented products have suddenly become the holy grail of health foods... Even bigger beverage brands like Coke and Pepsi have jumped into the fray with their kombucha lines and some alcoholic brands are also trying to get into it for their non alcoholic line,” says Cyriac Thomas, founder of Umami Brew. With a brand new production facility in Pune Umami Brew has been churning out roughly 5,000 bottles a month. Why is a fermented tea trending?

According to a new market study published by Global Industry Analysts Inc. (GIA), a market research company, the kombucha market worldwide is set to grow by a projected US $3.6 billion, driven by a revised compound annual growth rate (CAGR) of 19.8%. Moreover, the market for non-alcoholic beverages is expected to show a CAGR of 16.68% till 2025 on the back of a rising trend of switching to natural juice based drinks.

Kombucha’s success is due in part to its marketing as a health food. The probiotics, vitamins and enzymes found in the drink are said to have beneficial effects, including weight loss, improved digestion, increased energy, immune system support and detoxification of the body. Nobel Prize winner Aleksandr Solzhenitsyn credited kombucha with curative properties in his novel The Cancer Ward. After his own fight with cancer, Ronald Reagan became a fan. Celebs have followed suit ever since: Reese Witherspoon, Anna Paquin, and Orlando Bloom have been snapped clutching bottles of “booch”.

“The bacteria found in fermented food helps improve our gut microbiome... having at least 2-3 servings of fermented foods a day is highly recommended. That doesn’t mean all of it should come from kombucha. Indian meal of rice, dahi and pickle tops my list of fermented foods. I recommend it to anyone on a course of antibiotics or recovering from a chemical overdose,” says Madhuri Ruia, nutrition expert and author of ‘Who Stole my Calories.’

Heavy coffee drinkers looking to kick the habit have found success in kombucha, which contains a small amount of caffeine from the tea it is brewed from.

The flavours also have a part to play in kombucha's wide uptake. Though ginger, apple and kokum are the most popular flavours today, kombucha manufacturers are pushing the envelope with raw mango, rose, hibiscus, watermelon and blueberry flavours too. 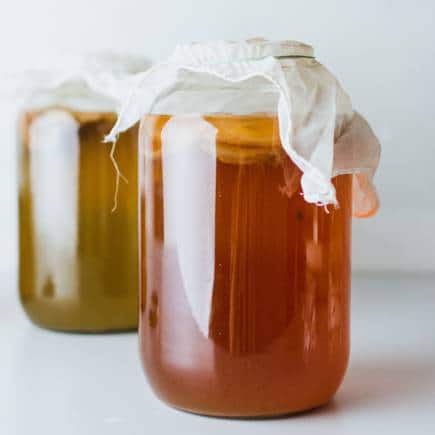 The philosophy that too much of a good thing can be bad applies to kombucha too. Though the occasional kombucha drinker needn’t worry about this side-effect, those drinking multiple bottles of the brew every day may suffer nausea, headaches and even tooth decay.

“To trust a kombucha, you should be fully aware of the way it is prepared because it involves the play of bacteria and fungi of various types. Your whole gut will suffer even if one wrong species enters the brew,” warns Shweta Shah, a nutritionist.

Not just that added carbonation, added sugar, synthetic flavours and vinegar can kill the benefits of this fermented drink. Doing your own research, picking the most naturally-probiotic and wildly fermented brews and trusting your tongue is the only way to know.