The Hinduja dispute: Four brothers and a document that is key to their $15.6 billion fortune

Till now, the four bothers were seen in sync. Not anymore. And at the centre of their dispute is a 2014 document.

Brothers fighting over property is a story that has played out repeatedly in the annals of India Inc. Yet, many were surprised when news emerged that the Hinduja brothers have taken their dispute over family assets to the High Court in England.

Names of the four brothers - 'patriach' Srichand Parmanand Hinduja, and his three younger siblings GP Hinduja, PP Hinduja and AP Hinduja - were often taken in sync, and their public appearances added to the legend.

Nearly every time, each brother would be accompanied by at least one or two of his siblings. Perhaps, their joint appearances in courts over the Bofors case, where they were alleged to have taken commission, added to the persona, and the perception that the four siblings were in it together, through thick and thin.

Their closeness reflected in the shareholding pattern of their listed companies. A cursory look showed that three of the four listed entities of the Hinduja Group do not have any direct shareholding of the promoter individuals, much unlike some of the family-promoted companies of its peers.

Ashok Leyland, IndusInd Bank and Gulf Oil, all forming part of the Hinduja Group, do not have any individual shareholding as per data provided by the companies on the BSE. These companies have promoter group entities holding stakes in the listed companies.

Hinduja Global Solutions, the BPO service provider, is the only group company that has members of the Hinduja family directly holding shares.

"When there are multiple vehicles without assigning ownership to an individual, then the basic assumption is that we are in it, together. The individual doesn't matter," says Kavil Ramachandran, Clinical Professor and Executive Director of the Thomas Schmidheiny Centre for Family Enterprise at the Indian School of Business.​

"This is like a joint family concept.  Your name is my name, my name is yours, everything is everyone's, equally," adds Ramachandran. 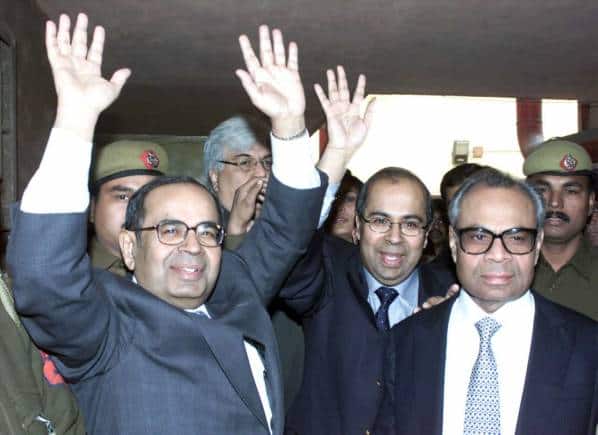 The flagship and its peers

Ashok Leyland is the flagship company of the Hinduja Group. The promoter stake of this truck and bus maker is split into four entities - Hinduja Bank (Switzerland), Hinduja Automotive, Hinduja Foundries Holding and CitiBank NA – making up nearly 52 percent stake.

No Hinduja family member holds any direct stake in Ashok Leyland as per the BSE data.

In the case of M&M, Chairman Anand Mahindra and wife Anuradha Mahindra are individual shareholders in the company listed under the promoter category.

In other words, in the case of the Hinduja brothers, it was never known how much each brother held in these companies. In fact, all the Rich List surveys rank them jointly. The 2019 Forbes India Rich List ranks them third, with a wealth of $15.6 billion.

There were signs that the next generation was taking active interest in businesses that spread across the globe. It wasn't surprising. Patriarch Srichand Parmanand Hinduja is 84, and the youngest brother, AP Hinduja, is 69.

In other words, says Ramachandran of ISB, the family difference has come to its fourth stage - dispute. The professor in his book, 10 Commandments for Family Business, narrates that there are five stages to a family difference - dilemma, deviation, differences, dispute and the last, destruction.

"Any family difference starts with a dilemma. It could be a dilemma about role, responsibility or shareholding. Once this dilemma reaches the dispute stage, it's difficult to go back. It means that family discussions haven't worked out," says Ramachandran.

It is difficult to ascertain if the 2014 document, which is at the centre of the dispute, is an informal agreement, a will or a basis of a family constitution.

"If you have a constitution, then it means you have thought through succession. Some of the business families have done so, including the Godrej and Murugappa families. So these families expose the next generation to the constitution as they grow up," says Ramachandran.

But if there is no constitution, he adds, and there is just an understanding between a set of brothers, it doesn't mean that the next generation buys into it.

In the case of the Hinduja family, it surely seems like the document has led to a difference in opinion. The document states that assets owned by one brother belong to all.

As the dispute plays out in the court, the document will play a critical role in deciding the winner. "The approach of any court will be to look at the sanctity of the document. If it can avoid a dispute and lead to equal distribution of property, then the court will give sanctity to the document, rather than trying to find loopholes in it," says Narendra Dingankar, Partner, Pioneer Legal.

Also, he adds, "what will be significant is what has happened since 2014, when the document was signed. The court will check if the family members have enjoyed the provisions of the document. If it's so, then the sanctity of the document will be upheld."

The court's decision on the document will now decide what happens next in one of India's richest business families.

With inputs from Prince Mathews Thomas.