India and Russia are almost insignificant trade partners. Neither exports nor imports exceed 2 percent in the total outbound and inbound merchandise of both countries.

Western nations have begun to announce sanctions against Russia following the latter’s moves to recognise separatist regions in Ukraine. The first tranche of sanctions announced by the US and UK target Russian banks and billionaires. Restrictions have also been placed on Russia’s sovereign debt, meaning that it cannot raise money or trade new debt on the western markets. More sanctions could be announced soon, the two countries have warned. Germany froze a new gas pipeline.

For the moment, trade is unlikely to be affected by these sanctions. However, if trade sanctions are announced to pressure Russia to withdraw from its belligerent position, India may not have much to worry about. India and Russia are almost insignificant trade partners. Neither exports nor imports exceed 2 percent in the total outbound and inbound merchandise of both countries.

Russia will, however, need to ensure that China does not take a hard stand against its moves in Ukraine. China is a major source of goods for Russia and also an important market for its fossil fuels, both petroleum crude and coal.

India’s primary imports from Russia was fossil fuels – coal, petroleum crude and products. In the 2020 basket of imports from Russia, the hydrocarbons accounted for about 19 percent in value, or $1.06 billion. In the preceding year, when crude oil prices were higher, these items accounted for about 30 percent of the imports from that nation.  Globally, Russia is the second largest exporter of petroleum after the US, but its supplies to India is tiny. Just about 1 percent of India’s fuel imports, including coal, were sourced from Russia in the past few years. 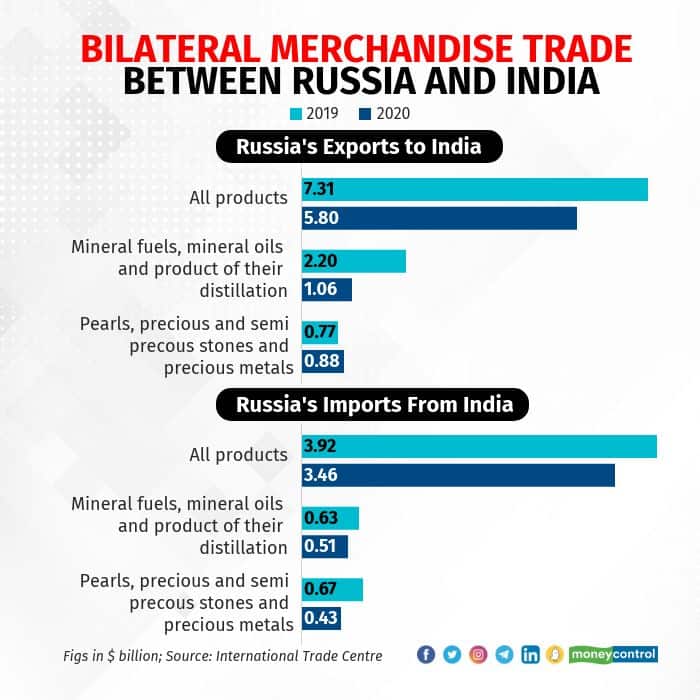 Pearls, precious and semi-precious stones are India’s second largest imports from Russia, worth about 15.1 percent of the value. However, they account for about 2 percent of India’s imports of pearls and stones.

Pharmaceutical products and electrical machinery and equipment are top exports from India to Russia, accounting for 14.6 percent and 12.4 percent, respectively, of the value of exports. But again, these exports are insignificant – just about 3 percent of exports of these items were destined for Russia.

In a sharp contrast, Russia has a huge dependency on China for its bilateral trade. China was both the biggest source of imports for Russia and also the biggest destination for its exports. Therefore, Russia needs a steadfast ally in China if the US and its allies were to impose trade sanctions for any attack on Ukraine. 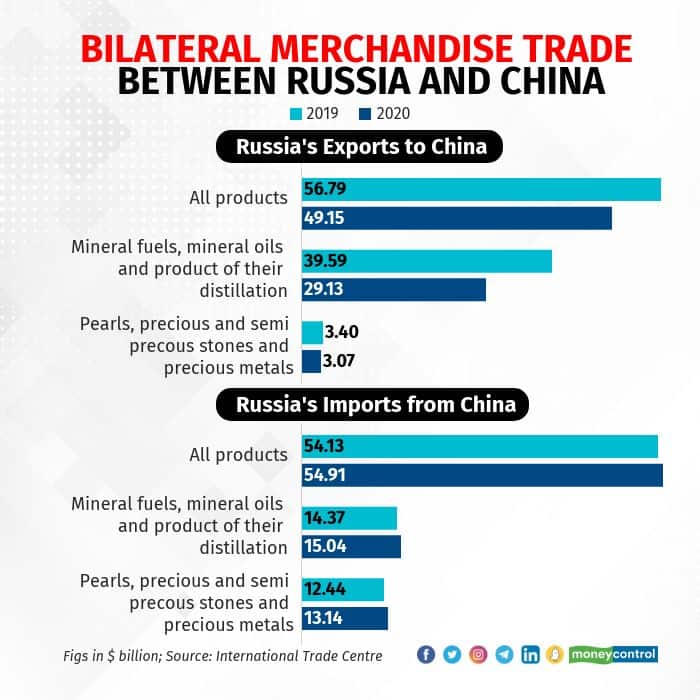 The world’s second-largest economy needs all the coal and petroleum crude it can source to keep its economy chugging. It was only a few months ago that China had faced an energy crisis, which had led to widespread blackouts and power rationing. It would therefore be in China’s interest also to diffuse tensions between Russia and Ukraine.