This Women's Day, two collections of short stories about rebellious women are slated to hit the stands.

This Women’s Day, two collections of short stories about rebellious women are slated to hit the stands.

Impetuous Women (Penguin Viking, ₹399) by Shikhandin (the writer’s pseudonym) is a darkly comic, thrillingly tragic collection of stories about women who step across the Lakshman Rekha against establishment, patriarchy, their own families and loved ones.

Women Who Misbehave (Penguin Viking, ₹399) by Sayantani Dasgupta contains multitudes and contradictions. The stories in it are unsettling and heartening, funny and poignant, dark yet brimming with light.

We spoke to both authors about the stories and themes in their new books. Shikhandin is an alumnus of the Anam Cara Writing Workshop, Ireland. Her published books include Immoderate Men (Speaking Tiger) and Vibhuti Cat (Duckbill-Penguin-RHI). Her poetry and prose have been published worldwide, and she has won several honours and awards.

How did you come up with the idea for your book of short stories Impetuous Women?

In the beginning, there was the story, or rather the stories, only the stories, gathering, collecting, finding homes in journals and magazines… Each came in by itself and was whole in itself. But, as in nature, everything forms a pattern, a design. Sometimes the design reveals itself right at the beginning. Sometimes it appears as if out of nowhere. Sometimes the stories come together like molecules and take a specific shape as a collective.

I like to believe that in my story collections, this, the last one, is what happens. I guess, the idea of a bunch of ‘impetuous women’ blossomed after all the stories were written. In other words, the idea for Impetuous Women came from the impetuous women in the stories!

Please tell us briefly about some of its stories and their themes.

As the title suggests, the stories revolve around women – women from all walks of life, in India and abroad, specifically Singapore. These women, regardless of their social standing, are imperfect, like snags in swatches of fabric. They are claws and fangs and tender things too, helplessly caught in their lives.

The two friends, for example, in the story ‘Taste’, whose friendship is more about rivalry and one-upmanship, reveal their insecurities to the reader turn by turn. In ‘Threshold’, the office-going woman who employs a feisty ‘refugee’ to take care of her household chores, as good as confesses to the real reason why she was so perturbed about her domestic help. ‘Lid Banged Shut’ is about a self-absorbed trophy wife who discovers the truth about her status after her husband’s death. ‘In Missing the Movie’, a young couple in a village, who are disdainful about their stolidly rustic older brother and his wife, are in for a rude shock.

An upwardly mobile woman in ‘It Comes from Uranus’ (‘Uranus’ is used here for its phonetic resemblance to a rude phrase) and her old school mate, an Indian-born American, end up hating each other after a short visit. ‘Thirty Third Egg’ is about a trio of women holidaying at a seaside resort and their waiter who has to account for their excessive egg consumption. ‘What Lingers’ is about a housewife who discovers her sister-in-law’s vicious plot to deprive her of ‘the good life’ in Singapore. The stories have bathos and pathos, fear and fun, the snarky and the spunky in varying measures. I hope all together they provide a wide range of literary flavours for my readers.

Why do you call yourself Shikhandin?

Truthfully, I’ve always been ‘Shikhandin’ within. I could never relate to being a ‘woman this’ or a ‘woman that’. Yet I revel in being a mom, the kind who cooks for her family and mends clothes and so on. With regards to my writing life, my voice and writing style change according to the character or situation. This trait is especially true in my poetry and short fiction. I don’t see this as a handicap. It is, in fact, my strength – that I can be this shape-shifter or ‘bahuroopee‘. Like Shikhandin, as a writer, I too am fluid, with no fixed gender.

That apart, Shikhandin is a character I admire a lot, her struggles, her commitment and her resolve. She is, I feel, one of the strongest personalities in the Mahabharata. I wanted to take on her name since I was a young woman.

You have written poetry, children’s books and short stories for adults. Which do you enjoy most?

I enjoy them all, equally! There is a time and mood for each, during which I give them equal attention, and that includes novels, my last one was several years ago. The categories and genres I write in follow my reading tastes. I am an old bat, but I still love reading children’s books!

Short stories are faster to write and I write them mostly in between longer works. But the ‘in between’ time has grown too long lately. I have half and quarter finished manuscripts for full-length books scattered in files, I have to immerse myself in them again. So right now, it is novels that I am looking to ‘enjoy most’, and the sooner the better.

Your book Immoderate Men (Speaking Tiger Books, 2017) consisted of short stories with male protagonists. How was the process different writing with female protagonists this time round?

There is no difference in approach and process. At the end of the day, both men and women are humans. They have similar idiosyncrasies, foibles, desires, needs, insecurities, issues and character traits. Men gossip as much as women, and women can get into fisticuffs with the same alacrity. Beneath the skins of their individual genders, they are the same, once you look beyond the socially created boxes. 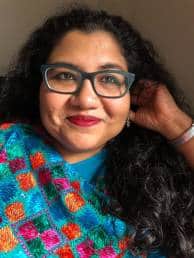 Sayantani Dasgupta is an assistant professor of creative writing at the University of North Carolina Wilmington. She is the author of Fire Girl: Essays on India, America, & the In-Between – a finalist for the Foreword Indies Awards for Creative Nonfiction – and the chapbook The House of Nails: Memories of a New Delhi Childhood.

She has been awarded a Centrum Foundation fellowship and a Pushcart Prize Special Mention. Besides the US, she has taught creative writing in India, Italy, and Mexico.

How did you come up with the idea for your book of short stories Women Who Misbehave?

I didn’t begin writing the stories with this deliberate theme of misbehaving women. But because I am drawn to unconventional women, whether in story or in real life, I suppose it was only a matter of time. After I wrote the first three stories, I began to see them as belonging in a collection. That’s how the seeds got planted.

Subconsciously, the roots of this inspiration must lie within my family, which is full of strong women, like my mother who instilled independence in me. Or, my paternal grandmother, who defied societal norms to marry my grandfather, then went on to pursue her Master’s degree long after the birth of her children.

Unlike many others of her generation and even now, she travelled the length and breadth of India on her own, without needing her husband and children to tag along. Sure, age has slowed her down now, but no doubt growing up with that kind of a grandmother had an impact on me.

Please tell us about some of the stories and the themes in the book.

Overall, my book is about women and men from a variety of backgrounds, making sense of their lives, while experiencing everything from joy, love, lust and ambition to pride, anger, sorrow and revenge.

Three of my favorite stories are ‘The Party’, ‘Miss Josephine’ and ‘A Hard Kind of Love’. ‘The Party’ captures the claustrophobia of social situations we can’t get out of even though we may be well aware of the harm that toxic relationships may cause. I think ‘Miss Josephine’ is my take on the “witch” of Hansel and Gretel. ‘A Hard Kind of Love’ is a look at what it’s like to be married to a writer even if (hopefully) things don’t get as dire as they do in the story!

Tell us about the inspiration behind your debut collection of essays Fire Girl (Two Sylvias Press, 2016), your personal story set against the history, religion, popular culture and mythology of South Asia and your life in the US.

Even though we see so much of the US through books, TV and cinema, the reality of living there is, of course, different. For me to go from New Delhi to the small university town of Moscow, Idaho, with its population of 25,000 people was a huge shift. I wrote several of the essays as a student in my creative-writing program. I wanted to understand this “in-between” status I felt, as if half of me was constantly in India, and the other half was trying to make sense of Idaho.

The essays cover a vast range – from feeling homesick on hearing an Ajay Devgn song to travelling to Bangladesh to see my family’s ancestral home to being the only person of colour in all-white classrooms whether in my role as a student or later, an instructor.

Which are some of your all-time favourite books centred on women?

The Mahabharata. What would its 100,000 verses be without the women?