Is veg biryani even a biryani?

Is biryani all about the meat? Or is it about the technique? And is there any such thing as a veg biryani? As the eternal biryani war rages on, which side are you on?

Dum pukht style biryani at Art of Dum. Dum refers to a style of cooking in which the dish is sealed (usually with dough) and cooked slowly over low heat.

If there's one dish that enjoys a rampant fan-following across the country, it has to be the biryani.

Made with meticulously layered rice and meat, and aromatic spices (including more than a hint of saffron), this one-dish meal invariably starts a spicy banter among biryani lovers defending the biryanis of their areas: Thalassery biryani from south of the Vindhyas, Dindigul biryani from Tamil Nadu, Lucknowi biryani, Hyderabadi biryani and Kolkata biryani. Apart from the age-old debate on the best biryani and the needless controversy over aloo in biryani (let's face it – an aloo buried in a biryani is delish), what triggers biryani lovers is the mention of veg biryani.

But before we address the hullabaloo, let’s delve deeper into the origins of this aromatic rice, meat and masala dish which is no less than culinary artistry in a degh.

The word biryani comes from the Persian words birian, which means ‘fried before cooking’, and birinj, meaning rice. There are various theories about the origin of this scrumptious dish.

“Many historians believe that biryani originated from Persia and was brought to India by the Mughals. Other stories credit Mumtaz Mahal, wife of Shah Jahan. When she visited the army barracks, she found the Mughal soldiers undernourished. In order to provide a balanced diet to them, she asked the chefs to prepare a dish with meat and rice. The dish was whipped up with spices and saffron and cooked over wood fire,” explains Paul Noronha, executive chef, ITC Grand Central. 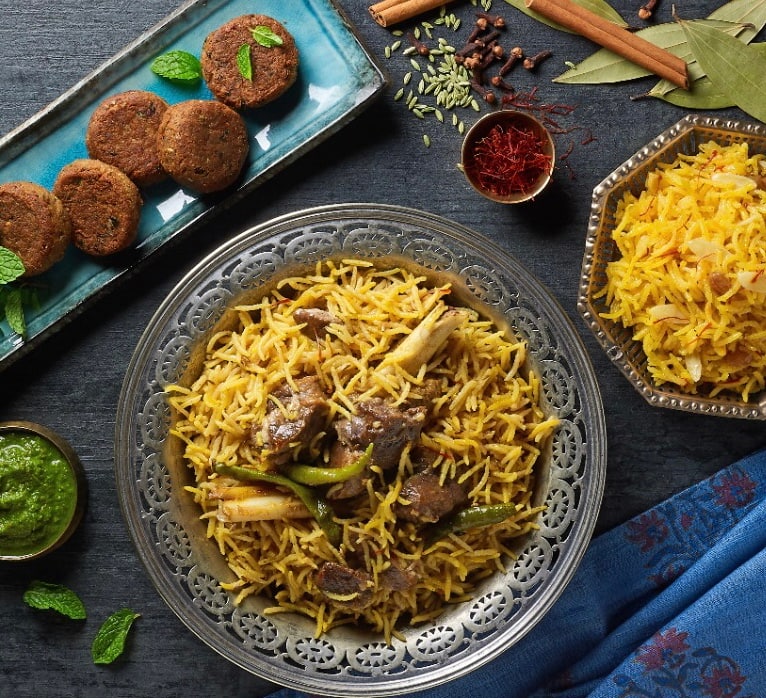 Another legend states that biryani was brought to India by the Turk-Mongol conqueror, Taimur, in the year 1398. The Mughal royal kitchen developed the dish further.

Various versions of it originated, using local ingredients and spices. The aromatic symphony of the Hyderabadi biryani; the Old Delhi biryani with the distinct tang of pickle; the mildly flavoured Lucknowee biryani; super spicy Memoni biryani from Gujarat; Tamil Nadu’s Ambur biryani with jeera samba rice; Bhatkal biryani from coastal Karnataka with a generous infusion of grated onion; and Thalassery biryani from Kerala with roasted nuts. What remains common is rice, sautéed meat and a lot of rich flavours. Biryani from Biryani by Kilo.

For many years now, biryani lovers have been up in arms against vegetarians terming a spicy rice dish with vegetables veg biryani.

“A biryani is not complete without red meat or chicken. It is the gelatin of the bones that coats every grain of rice while slow cooking, providing it a very unique texture and taste. Vegetable biryani, in my view, is only a spiced version of a pulao,” says Sarfaraz Ahmed, head chef at Tresind, Mumbai.

At most it can be called a Tehri - a mildly spiced rice dish with potatoes, turmeric and cumin, cooked using an absorption method, Ahmed says. Tehri is always vegetarian and, if not for a spoon of ghee, vegan.

So is veg biryani a pulao in disguise?

“Never,” says Anuradha Joshi Medhora, a devout biryani fan and founder of Charoli, a delivery kitchen that specializes in food from the royal kitchens of the Malwa region of Madhya Pradesh.

“You can’t confuse the elaborate art of biryani with the humble pulav. Pulav was a part of the Indian diet much before the Islamic invasion. Biryani was born in Persia and travelled to Hindustan with the Mughals. Pulav follows a fairly simple cooking style. To make a biryani, a ‘layering' technique is used. The meat is cooked separately with spices and the rice is parboiled. The two are then arranged in layers while adding subtle condiments and herbs to it, and cooked slowly on dum. Generally, spices used in pulav are subtle, but the elaborate use of spices is a binding factor in a biryani,” explains Medhora.

Moreover a pulao requires an additional dish like a daal or a curry to accompany it. A biryani (at least a good one), is a self-sustaining rice dish that doesn't require any accompaniment apart from yoghurt to soften the spice or make the dish less dry.

But die-hard patrons of veg biryani are not throwing in the towel. Not without a fight. 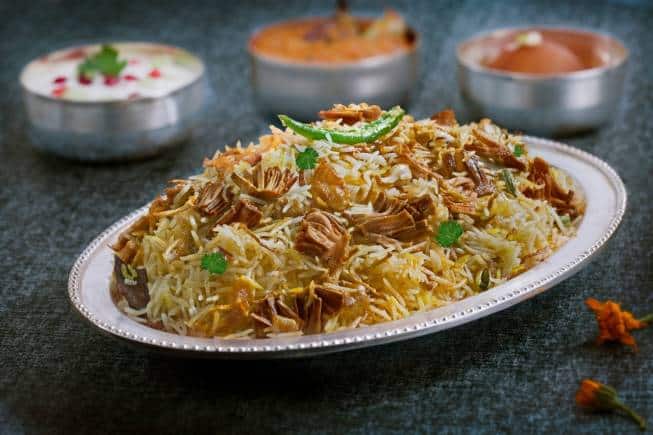 “Why should the non-vegetarians be offended with a vegetarian biryani? It’s high time veg biryani got its due, especially if it’s cooked as painstakingly as a non-veg biryani using the layering technique and in dum? Doesn’t that qualify to be a biryani, with or without meat?” asks Shipra Rao, a yoga teacher and an ardent veg biryani lover.

The sentiment is echoed by Noronha. “Veg biryani is as much a biryani as a non-veg one if it is made by layering and cooking on dum. The vegetables and the spices create a mélange of flavours and aroma which tickle your taste buds as much as a biryani with meat would do. In fact, at ITC we do a delicious veg biryani using jackfruit.”

So can the biryani and veg biryani coexist?

Food, like everything else, has evolved and adapted to the times. Take the samosa, for instance. An import from Persia, it started out as mince-filled triangles. We Indians made it our own and stuffed it with spicy potato and peas! There’s no need to be uptight. Now pass some mutton biryani, please!