Upcoming Webinar:Innovate Your Future at India Inc. on the Move on August 26 and 27, 2021 at 10am, with Rockwell Automation
you are here: HomeNewsPolitics

The result is likely to have a bearing on the Assembly election slated for later this year. A BJP government led by CM Manohar Lal Khattar is governing the state

The National Democratic Alliance (NDA) on May 23 registered a resounding victory in the 2019 Lok Sabha election, to retain power. The ruling alliance won over 350 seats while Bharatiya Janata Party (BJP) itself won 303 seats.

This left the Opposition decimated in most parts of the country, especially in the ‘Hindi heartland’.

One of the states that the BJP swept was Haryana. The saffron party won all of the 10 parliamentary seats in the state.

INLD’s breakaway faction, the Jannayak Janata Party (JJP), also failed to win a single seat. Except for JJP founder Dushyant Chautala, all of the party’s candidates lost their deposits.

In terms of vote share, the Congress was placed behind the INLD. BJP won 34.8 percent of the votes. INLD and Congress secured 24.4 percent and 23 percent votes, respectively.

AAP, which was making its debut in the state, failed to win a single seat despite securing 4.3 percent of the votes.

In the 2014 Assembly election, that happened a few months after the Lok Sabha election, BJP won 33.3 percent votes. INLD and the Congress won 24.2 percent and 20.7 percent votes, respectively. 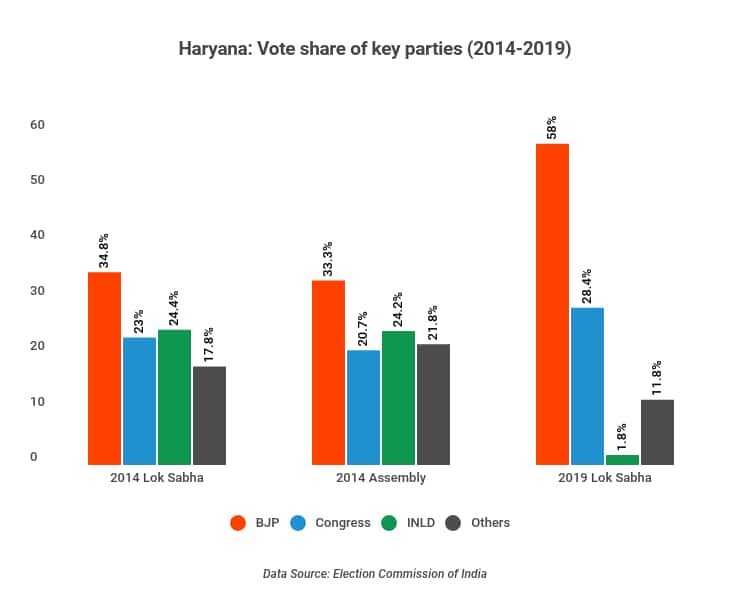