Five Indian states will declare results on May 2 from local elections held in March and early April. The election results are seen as an early test of the impact the devastating second wave of the coronavirus pandemic is having on support for Prime Minister Narendra Modi and his right-wing BJP party.

Counting of votes in Assam, West Bengal, Tamil Nadu, Kerala and Puducherry began on May 2 morning.

Counting of votes in Assam, West Bengal, Tamil Nadu, Kerala and Puducherry began on May 2 morning.

Over 1,000 count observers will conduct the process with everyone expected to produce a negative COVID-19 test report or show they have been fully vaccinated.

Most of the votes in the state elections were cast in March, but polling in some constituencies continued through April, just as India started detecting thousands of fresh coronavirus infections every day.

I would like to thank my sisters and brothers of West Bengal who have blessed our party. From a negligible presence earlier, BJP’s presence has significantly increased. BJP will keep serving the people. I applaud each and every Karyakarta for their spirited effort in the polls: PM Narendra Modi

Kamal Haasan sees set back in Coimbatore south with BJP's Vanathi Srinivasan leading by 900 votes at the end of round 23 at 6.55 PM

Let the Nandigram people give whatever verdict they want, I accept that. I don't mind, says Mamata.

The swearing-in will be a low-key event because of the prevailing COVID19 situation, West Bengal CM Mamata Banerjee says.

Top BJP leaders had announced that they were moving towards forming a government. At that point, we were told that their current account here would be closed in this election: Kerala CM

It would be my privilege to represent the constituency for 5th consecutive term: Himanta Biswa Sarma Left in Kerala moves to a historic win as LDF's leads touch 100.

Meanwhile, Congress is still confident that the tally will reverse even though NDA seems to have swept in Assam, leading in 73 off 126 seats.

Mamata Banerjee, who was trailing in the first rounds of counting in Nandigram, is now leading after the 14th round of counting.

Amid TMC's thumping victory in West Bengal, its political aide Prashant Kishor has told NDTV that he was quitting political consultancy and election strategising.

"I have no desire to continue in this space. In victory, I can tell you that I am quitting this space. I have had enough. It’s a tough job. I don’t want to be doing this all my life. It's time for my I-PAC colleagues to takeover," he said.

In Assam, BJP has secured a comfortable lead over the Congress-led alliance.

Meanwhile, EC has asked chief secretaries to lodge FIR over celebratory congregations in anticipation of poll victory. It has also asked to suspend the police station in-charge in places where such gatherings happen. Meanwhile, Delhi Chief Minister Kejriwal has congratulated his Bengal counterpart Mamata Banerjee on TMC's 'landslide victory'. Banerjee, who has been trailing since morning in Nandigram, has now regained a leading position against BJP Suvendu Adhikari.

Bengal CM Mamata Banerjee, for the first time in the day, is leading in Nandigram.

Mamata Banerjee has cut margin in Nandigram while TMC now leads in more than 200 seats.

In Tamil Nadu, DMK leads in over 140 seats while ruling AIADMK leads in 91. In Puducherry, NDA leads on 8 seats, UPA on 3.

In what has been the most-watched assembly constituency fight in the state, TMC supremo and West Bengal Chief Minister Mamata Banerjee continues to trail former party leader and BJP candidate Suvendu Adhikari by around 3,700 votes after the fourth round of counting.

However, the TMC continues to claim that the tables would quickly turn after counting for seven rounds are over. The party coined the term "Bengal wants its daughter" as its election slogan.

The Election Commission has confirmed there will be a total of 17 rounds of counting for the seat, situated in Purba Medinipur district.

There is a big LDF wave in Kerala as the Vijayan government marches to a historic win, mid-day trends reveal.

Meanwhile, CM Mamata Banerjee continues to trail while her party looks to be back in West Bengal for the third term. TMC is now leading in more than 200 seats in Bengal. 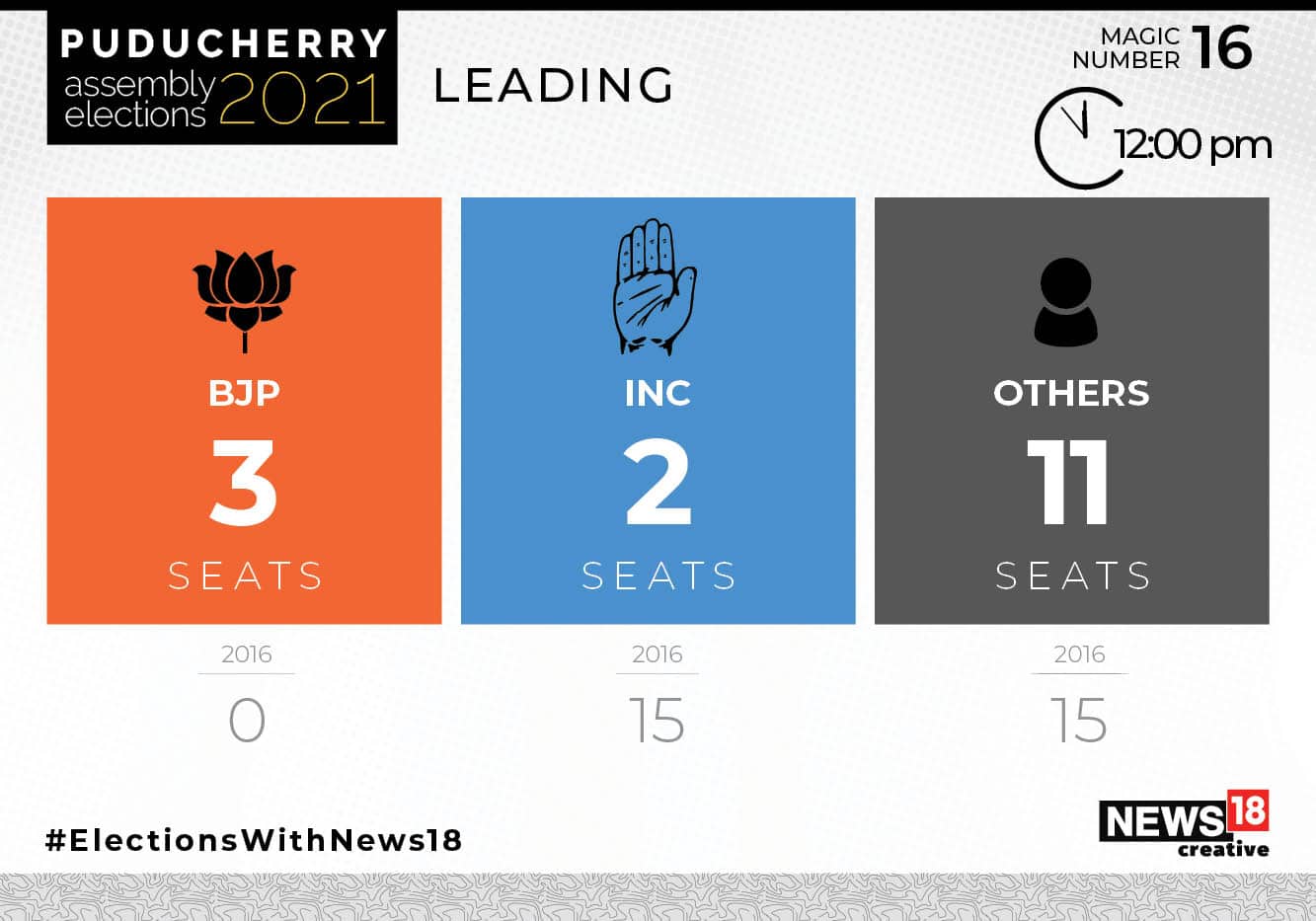 TMC is now leading in 198 seats in West Bengal while the neared rival - BJP - far behind leading in 90 seats.

The situation seems quite clear for DMK in Tamil Nadu, BJP in Assam and LDF in Kerala. All these parties seem to secure victory in their respective state.

TMC is holding the fort in Bengal, leading in 195 seats. BJP is far behind (93) even though it is a major leap from the last time.

Kerala, which often votes against the incumbent government, seems to have change the strategy this time. LDF is leading in 92 off 140 seats in God's Own Country.

BJP is looking for a comfortable win in Assam, leading in 80 off 126 seats. In Puducherry, BJP is leading in 11 off 30 seats while Congress is leading in six seats.

Mamata Banerjee's TMC is looking to touch the 200 mark in West Bengal even though it is quite early to come to any conclusion at the moment. BJP is leading in 90 seats, which is a huge improvement from the previous state elections in 2016. However, it is far from the magic number (147) to form the government.

TMC looks to be in a more comfortable position to win Bengal even though CM Mamata Banerjee is still trailing in Nandigram. TMC is now leading in 177 seats while BJP is claiming 88 seats, a huge leap from the three seats it gained in 2016.

West Bengal CM Mamata Banerjee is trailing BJP's Suvendu Adhikari even though TMC is now quite ahead in the state.

Communist Party of India (Marxist) candidate and Kerala Health Minister KK Shailaja is leading in Mattannur Assembly constituency. She is facing a challenge from Illikkal Agasthy of Revolutionary Socialist Party of Kerala (Bolshevik), and Biju Elakkuzhi of the Bharatiya Janata Party, along with other independent candidates.

The BJP is leading in Puducherry's Kamaraj Nagar seat, while the Congress is ahead in the Mahe constituency. 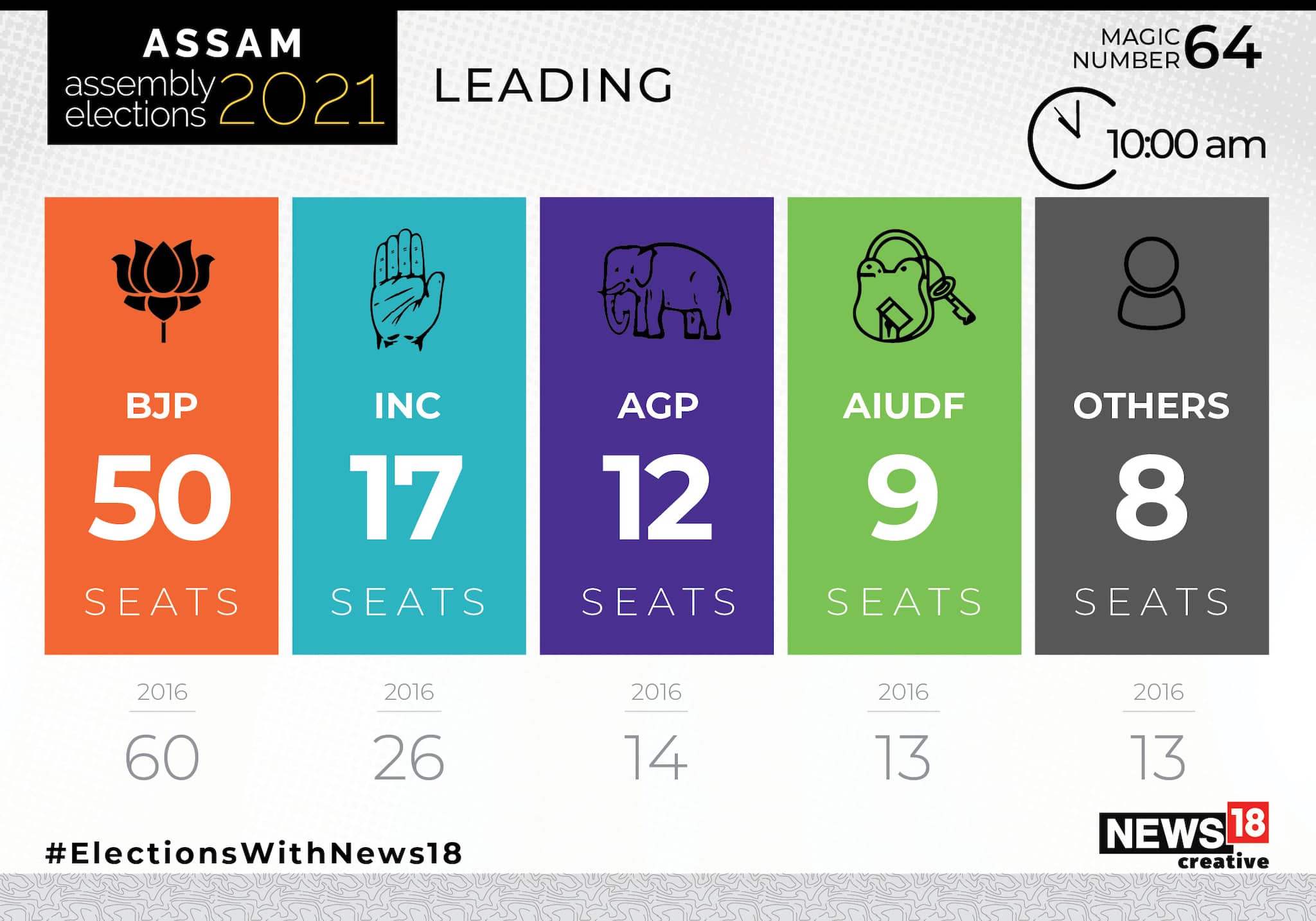 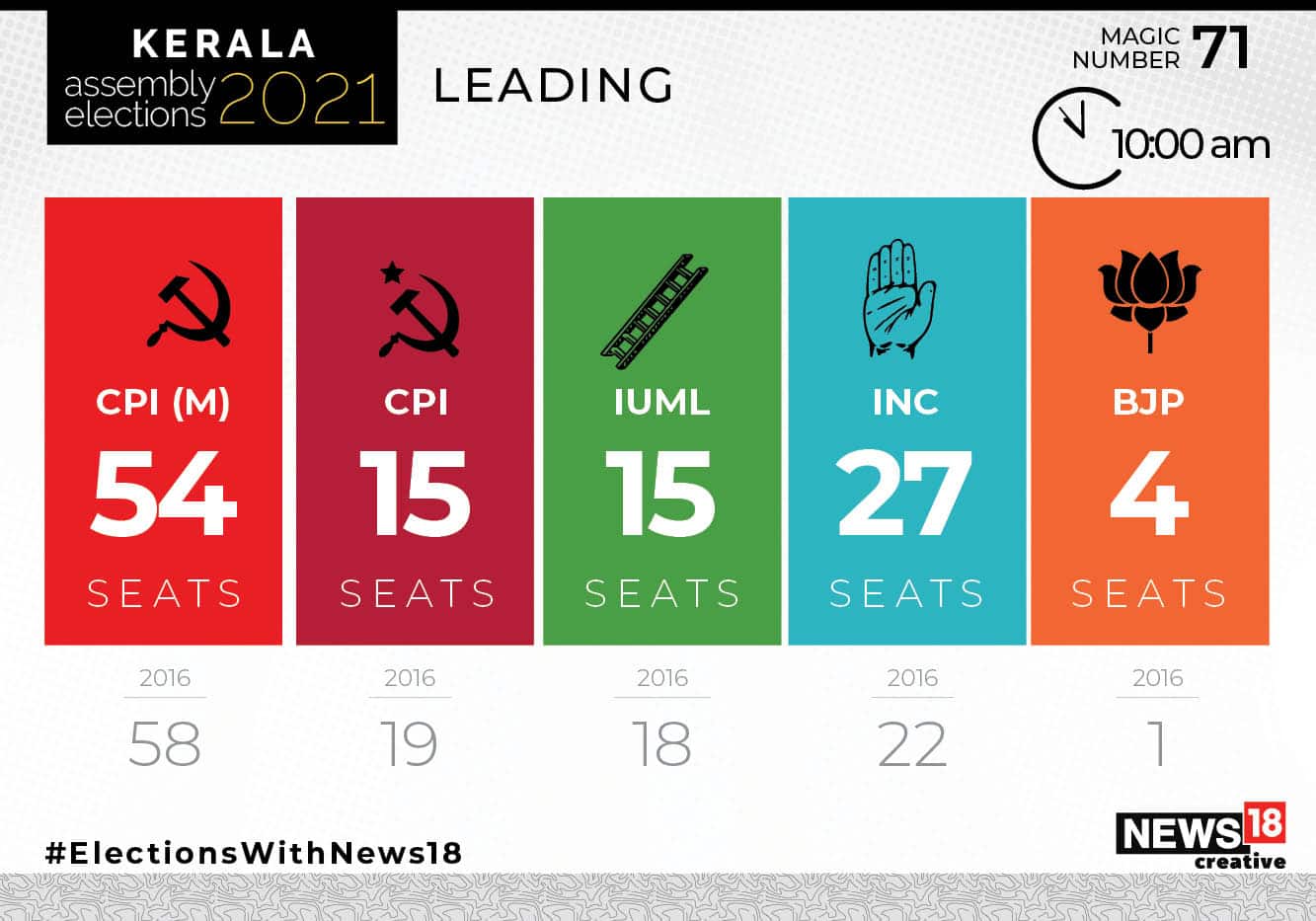 Even after the second round of counting, BJP’s Suvendu Adhikari is ahead of Chief Minister Mamata Banerjee in Nandigram. The leads is now for more than 4,500 votes.

After the first round of counting, BJP’s Suvendu Adhikari is ahead of Chief Minister Mamata Banerjee in Nandigram.

The early trend continues as Trinamool Congress (TMC) is leading in 84 seats in West Bengal, with the Bharatiya Janata Party (BJP) leading in 70.

Early trends show that there is a neck and neck fight in West Bengal between the TMC and the BJP. However, TMC is slightly ahead at this moment. In Tamil Nadu, the DMK alliance is leading while the LDF is quite ahead in Kerala. The BJP is leading in both Assam and Puducherry.