Opinion | Central banks embark on a gold rush, should you?

During the past decade many central banks have shored up their gold reserves. This is in contrast to the previous decade when many central banks were cutting back on gold. So is something happening? Central banks' love for the yellow metal has in turn made gold speculators in Dubai quite bullish.

*Disclaimer: The objective of this column is not to recommend gold as an asset, but to point out the ripple effect central bank gold purchases have caused.

So why are central banks purchasing gold? The standard answer given by central bankers that gold is part of a basket of currencies each country has to hold, as part of its foreign exchange reserves.

But there are unstated reasons as well. Many countries have begun to feel that holding too many US dollars as part of their reserves could be risky. They are expecting turbulence in forex markets shortly. 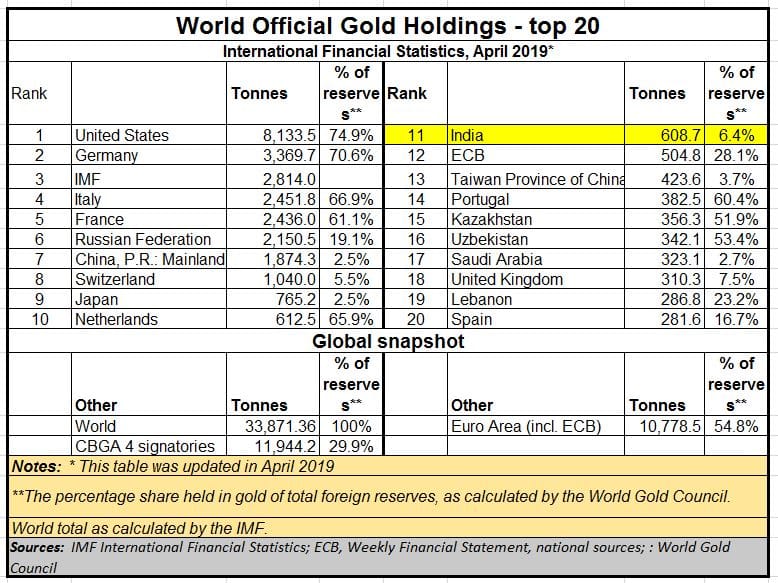 They point to the increasing role of non-dollar trades. While it is difficult to put a finger on the exact role each currency plays in world trade – some of the trades have in-built political give-and-takes structured as part of such deals – a good indication can be found from figures released by Currency Composition of Official Foreign Exchange Reserves (COFER), International Financial Statistics (IFS).

The numbers show that just euro and renminbi trade swelled from 17.51 percent of total global foreign exchange reserves to 21.21 percent during just seven quarters from Q2 2017 to Q4 2018. But when allocated reserves (which are around 83-94 percent of total forex reserves) are taken into account, the share of the Euro and Renminbi soars even further.

Their share climbed from 21.03 percent to 22.58 percent during the same period. This is without considering the yen or the pound sterling, because they are unlikely to become global currencies. Clearly, the US dollar is losing its clout in global trade in a growing market.

With neither the euro nor the renminbi yet ready to assume the mantle of becoming a global currency, many banks prefer reducing their exposure to the US dollar, and have begun focusing more on gold which is relatively neutral when it comes to geographic loyalties. However, the US, a major gold owning country, chose not to purchase gold during the past decade. It would appear that it did not want to give more weight to gold at the cost of its own global supremacy. Germany, another major gold owning country sold 37 tonnes of gold. But that could be explained away because Germany already has too much of gold in its reserves.

In fact, both the US and Germany – both economic powerhouses in the global economy – have tremendous (though unstated) confidence in gold. This yellow metal already accounts for as much as 70.6 percent share in Germany’s forex reserves. In the case of the US, it is even higher, at 74.9 percent. India’s holdings in gold stand at just 6.4 percent of its reserves. This low figure points to an urgent need for India to revise its gold policies and start building its gold reserves without resorting to global purchases. One way would be to liberalise gold mining policies.

Another way would be to introduce better versions of gold bonds. After all, various estimates put India’s gold holdings (in private hands) at 20,000 tonnes to 25,000 tonnes, the largest in the world.

Expect both Russia and China to start scaling the list of top gold holders given their aggressive purchases during the past decade. Russia has an added advantage. It is believed to have the highest reserves of (as yet unmined) gold in the world.

Also expect, the US dollar to continue losing its share in global commerce because of three reasons. First is obviously the emerging economic heft of China. Second is the stupid moves the US has itself made, explained a bit later. A third reason could be the declining relevance of oil, thanks to solar and other renewable sources of energy. It is always worth remembering that the US is a major player in oil markets as well, both directly as well as through its various oil companies.

That the US has made unwise moves can be seen from the manner in which it tried to sanction oil exports from Russia to Europe. That move made Russia swiftly clinch an oil and gas trade deal with China and build an oil pipeline to this dragon country. That, in turn reduced China’s vulnerability to both Middle East and US based energy markets, and caused a substantial amount of trade to move away from US dollars.

A similar situation is happening with Iran as well. Trying to impose (unilateral) sanctions against Iranian oil, will replay a similar scenario. It will push Iran to sell more oil to China, which always needs increasing amounts of energy as it grows in industrial strength. That will reduce the share of US dollar denominated trade further.

It won’t be long before India too might have to move this way, if it wants to bridge the growing trade balance with China which has already emerged as its largest trading partner. As time goes by, trade between India and China is bound to grow – partly on account of geographical proximity, much in the same way US-Canada trade ties have swelled over the past several decades, and partly because of business negotiations.

India’s defence deals with Russia are also likely to reduce dollar denominated trade, and this scenario could get replicated in several ways around the globe. China’s predominance in the telecom sector – remember 5G – could further accelerate the move away from the US dollar. That could also explain the ire of the US over China’s Belt and Road Initiative (BRI) which again gets into non-dollar deals.

As the dollar loses market share, expect turbulence in currency markets to increase. That will push more central banks towards gold. Will this mean a gold rush? That is hard to say because gold prices are also a result of hedging and de-hedging strategies adopted by gold mining companies.

But one thing is certain. Gold is becoming more relevant to central banks than a decade ago. The lust for gold will thus remain undiminished.

Note: Additional information on both tables can be found by clicking here and here.