Star Air: The airline that has already surpassed its pre-COVID-19 performance

By July 2020 itself, the regional airline was flying more passengers than it did a year ago. What explains the feat that bigger airlines couldn't pull off?

There is one airline in India that has already surpassed its pre-COVID-19 numbers. Regional airline Star Air ended 2020 with a total passenger traffic of 9 lakh passengers, up from  a little over 6 lakh fliers in 2019.
Its share of the Indian aviation market doubled to 0.2 percent in the December quarter, compared to the corresponding period a year ago.
Sure, Star Air is not an IndiGo, which, in a month, has a passenger traffic that is six times  Star Air's annual numbers. Even among regional airlines, it's smaller than TruJet, the Hyderabad-based carrier.
But the performance of both the regional airlines point to a trend. TruJet ended 2020 with nearly half the passenger traffic of 2019, a recovery that is matched only by IndiGo and Vistara, among the bigger airlines.
Star Air, though, started doing better than pre-COVID-19 period, right from July 2020, within two months of the government resuming domestic flights. It ended both the third and fourth quarters of the year with higher passenger numbers, making up for the no-show from March-end  to May 25, when flights were suspended because of the national lockdown.
What explains the recovery of Star Air, the two-year old airline that is part of the Sanjay Ghodawat Group?

The start
Star Air was launched in January 2019, more than a decade after the Group had begun helicopter services.
The preparations, fittingly for an airline based in Bengaluru, was like any other startup. "Me and my colleague started off in a co-working space. We developed a plan, vetted it with experts and finally got an office only once we were a team of 20," CEO Simran Singh Tiwana told Moneycontrol.
"We didn't do anything conventional," adds Tiwana, an engineer-turned-helicopter pilot.
The team has now grown to 400 employees. Star Air comes under Ghodawat Enterprises, which is also the holding company for the helicopter vertical. "We have three helicopters. One is being used under a JV with Blade, the American company. The second is in contract with the Assam government, and the third is stationed in Kolhapur," says Tiwana. As far as aircraft are concerned, the fifth one is joining its fleet this month. 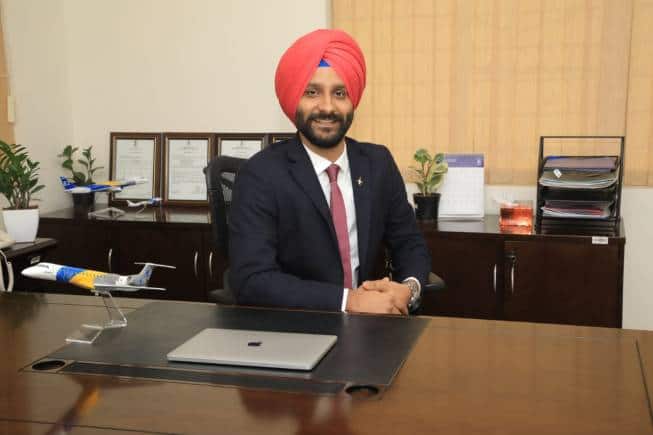 Expanding fleet and network
"Since May 2020, we have added 14 city pairs, taking the total to 32," Tiwana said.
The expanded network included Surat, which the airline added in December, connecting the Gujarat city to Ajmer and Belagavi. In January 2021, the airline launched services on the Kalaburagi-Tirupati route.
“We will be adding six more routes by the end of this financial year," Tiwana added. Four of these are covered under the government's UDAN scheme to promote regional connectivity. Under the scheme, government provides subsidy to airlines.
It also helped that Star Air launched charter services in July, to cater to the increasing private air travel demand as customers started looking for options that would ensure easier adherence to social distancing, post COVID-19.
Star Air’s fifth Embraer ERJ-145 aircraft coming in this month.  “This aircraft is unique as it can seat 50 passengers, and flies at the same speed and cruises likes a narrow body aircraft, allowing us to travel longer than what an ATR or a Q400 would allow," said Tiwana.
For instance, the airline now connects Kalaburagi in Karnataka to Hindon, the airport located in Ghaziabad and operated by Indian Air Force. In total, the airline now operates 20 flights a day, three days a week. The rest of the days, it has 16 flights.
Star Air buys its aircraft, a model different from the more popular sale-and-leaseback one. "This meant that we didn't have to worry about making payments to lessors during the lockdown and beyond," says the CEO.
Overall, adds Tiwana, while the dent from the pandemic breakout continues to be there, Star Air has recovered faster than the bigger airlines. "Our passenger loads in December was the second highest in the industry, second only to SpiceJet," he points out.
So, was it just fleet and route expansion that helped Star?
Emergence of non-metro routes
Star Air's performance underlines the larger trend that has emerged in Indian aviation amid COVID-19. And that is the faster growth in traffic in non-metro routes, as compared to the metro ones.
As s this Moneycontrol report had pointed out in December, 13 airports in the country recorded higher passenger movements than seen in pre-COVID-19 days.  All of these are airports in Tier-II and Tier-III cities.
Hindon and Pathankot were among the airports that witnessed the highest growth rates, with passenger traffic increasing by 41.6 percent and 28 percent, respectively.
That explains the higher-than-industry passenger loads that Star Air is getting. Its Bengaluru-Kalaburagi flights get a passenger load of over 80 percent.