What the first-quarter numbers so far tell us: Rural India is recovering

Consumption sectors (FMCG, durables, autos), though on a soft base, post noticeable volume growth for a consecutive quarter.

It is still early days before the first-quarter earnings calendar gathers full steam, yet the early result mix is enough to suggest few discerning trends.

Foremost is an uptick in consumption demand, which appears widespread, even as rural demand outpaces urban. Consumption sectors (FMCG, durables, autos), though on a soft base, post noticeable volume growth for a consecutive quarter. The IT sector continues with its resurgence thanks to their digital offerings and emerges as a key beneficiary of currency depreciation.

Among the major challenges thrown up by the results, input inflation appears sticky for most manufacturing sectors and the impact was felt in sectors like chemicals, auto, agro-chemicals and metals.

IT leads the pack; manufacturing gains from soft base
So far, 163 companies have reported their Q1 FY19 numbers. Excluding financial services companies, 139 companies posted, on aggregate, 12 percent sales growth YoY (year on year) with the major contribution from IT and auto companies. Operating leverage led to improvement in margins by around 140 basis points, or 1.4 percent. 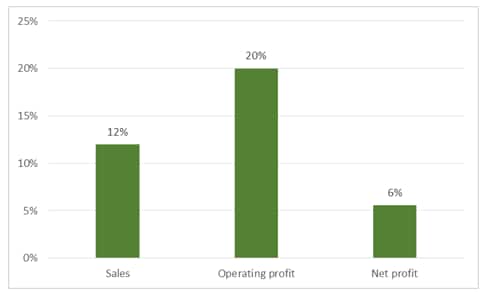 While optically, numbers look interesting, investors should keep in mind that large number of manufacturing companies witnessed pre-GST destocking in the run-up to the GST deadline (July 1) in the year-ago quarter. Hence, part of upbeat topline growth is contributed by the soft base.

Further, as a caveat, while analysing these numbers, investors should consider that YoY numbers are not strictly comparable due to GST accounting impact, which lowers the reported topline numbers in the post GST quarters. For instance, the FMCG sector’s reported sales growth numbers were mediocre but the comparable growth has been in lower double digit.

So as a way around, for a comparable assessment, we looked at the sequential growth numbers for the last three post-GST quarters and found that cumulative sequential sales, operating profit and net profit growth numbers have been 10, 14 and 15 percent respectively. These suggest a steady recovery. However, sales numbers for the last two quarters have been at par with operating profit, which means the cycle of margin improvement has plateaued.

Our qualitative takeaways from earnings

Early results from the FMCG companies reflect upon steady recovery in volume and earnings, albeit on a weaker base, as trade conditions have nearly normalised. While consumer offtake has been strong for general trade and modern trade channels, CSD (canteen stores department) has been a laggard. Topline growth has been led by the sector leader Hindustan Unilever (HUL), which reported third consecutive quarterly result of double digit volume growth.

Even more noteworthy has been the higher growth pace for the rural areas. However, HUL’s management is still shy of calling it a trend. Bajaj Corp updated that rural offtake for their flagship product, Almond Drop hair oil, has been 30 percent higher than urban in both volume and value terms.

While improved rural sentiments aided by recent policy measures and positive fall out of monsoon season augurs well for the sector, key risk factors to note from the sector result are increased competitive intensity and crude linked raw material prices.

Majority of IT companies had a great start to the new fiscal. Albeit a quarter of wage hike and visa costs, the favourable currency movement (rupee depreciation) and efficiency improvement restricted the decline in operating profit margin. The outlook/guidance for the future shared by these companies looks extremely strong as many of them are actively participating in the transformation agenda of the enterprises with a strong digital offering. The share of digital in their business is inching up and this business is commanding a higher margin and growing much faster than the company’s average.

Results reported from two auto companies, Ashok Leyland and Bajaj Auto, indicate that demand in domestic market continues to be robust across all segments: 2W (two-wheeler), 3W (three-wheeler) and commercial vehicle (CV). Export markets are also looking very robust in terms demand. However, there seems to be huge competition in domestic 2W and CV markets forcing companies to enter into a price war, which in turn hurting the operating profitability. Further, the companies continue to face pressure from the significant rise in raw material (RM) prices.

The retail focused private banks reported in line performance on expected lines. Loan growth has been healthy for them, as well. The upward revision in MCLR (marginal cost based lending) is beginning to impact lending yields positively. A large bank mentioned about pricing power coming back to lenders. However, the same lender cautioned about the stress in the SME segment which is perhaps borne out by the weak number reported by a mid-sized SME focused bank. One of the mid-sized corporate lender surprised positively on asset quality after reporting extreme stress in previous quarter that had an industry wide impact due to RBI’s guidelines on bad debt recognition. The weakness in garnering CASA (low cost deposits) was a trend visible across banks and points to firming up of rates in the system.

An exception to this trend was Bandhan Bank. The youngest private bank posted CASA growth of 84 percent YoY taking its CASA ratio to 35 percent, albeit on a lower base. The bank mainly in micro lending posted stellar performance indicating buoyant conditions for those operating at the bottom of the pyramid. One of the largest consumer lending NBFC, Bajaj Finance, continued to reap benefits of its two pronged-strategy of focusing on urban aspirational mass as well growing rural demand. Competition is heating up in the retail lending space. However, since the credit pie is growing driven by rising penetration and increasing average loan size, there is enough space for growth.

From the agrochemical stable, Rallis reported its numbers last week. The pressure on account of strained supply from China continued in Q1, pushing up the raw material prices. With limited pricing power and high competition there was continued difficulty to pass on the high costs to consumers and margins were impacted, despite a healthy growth in topline.

Within the materials sector, metals companies which have reported results so far have seen benefits of higher metals prices and better demand, thereby reporting strong growth in revenues. Companies have also reported better realisation. Increase in demand has resulted in higher volumes and impacted margins positively on account of operating leverage. Despite higher input cost (coal and others) companies like Tata Sponge and Hindustan Zinc reported record production led by higher demand from the user industries.

Another sub-segment from the material sector and among the favourite sector for last fiscal, chemicals in its initial set of results appeared struggling due to plant shutdowns (Bhansali Engineering & Goa Carbon) and elevated input prices. Having said that the key differentiator in this heterogeneous sector remains the end market prospects. Improving realization for the products like Calcined petroleum coke (Goa Carbon) provides strong growth prospects for aluminium companies.

In the engineering space, companies like ABB and few others that have reported results have delivered better than expected growth in sales led by recovery in demand. Segments like railways, renewables, construction, power T&D have been driving the growth while industrial continues to be an area of concern. Also, exports are seen to be improving led by recovery in global demand and depreciating rupee.

In case of cement sector, prices continue to remain subdued despite a strong volume growth aided by pick-up in infrastructure activities. Amid rising cost pressures and increased competitive intensity, cement companies are laying more emphasis on optimising cost structure. Talking about individual companies, UltraTech’s increasing rural segment contribution has been noteworthy and it has improved to around 40 percent from 35-36 percent a few quarters back.

Among building materials, Havells management has indicated that real estate sector has seen a stabilisation of demand post the introduction of GST and RERA last year. However, a strong pick-up in real estate will take some more time.