HDFC twins and SBI are among the list of stocks being presented by three experts. They also explain why technical indicators are favouring these stocks.

Five of the six members of the Reserve Bank of India’s (RBI) Monetary Policy Committee on December 8 voted in favour of keeping the repo rate unchanged at 4 percent and maintaining an accommodative stance as long as necessary to revive and sustain growth on a durable basis, and to continue mitigating the impact of COVID-19 while ensuring that inflation remains within the target.

The RBI’ stance, considering the current domestic and global environment, cheered the markets. The benchmark indices rallied around 1.5 percent each. The Nifty50 jumped 245 points to 17,422, and the BSE Sensex rallied 855 points to 58,489.

Experts feel the decision is largely in line with estimates as the economy still requires support from the central bank when the world is facing Omicron fears, and inflation is not a big concern for the time being.

“It is the right decision at this stage as the economy still needs a lot of support from the central bank to sustain the expected growth rates. Easy monetary policy will ensure sufficient liquidity in the banking system and low interest rates shall play a crucial role in reviving demand and kick-starting the capex cycle," says Raghvendra Nath, MD of Ladderup Wealth Management.

“Inflation is not a big worry right now as most of the recent spike was caused by higher commodity prices which are driven by international factors, and, shall, therefore remain unaffected by the RBI's monetary stance,” he said.

The fear of Coronavirus derailing the economy once again through another wave is real and highly probable, and these times require a high degree of monetary and fiscal support and the RBI is rightly dealing with it through its easy policy, he adds.

The RBI has maintained its GDP growth target at 9.5 percent for FY22, but revised Q3FY22 and Q4FY22 growth estimates downwards to 6.6 percent from 6.8 percent, and to 6 percent from 6.1 percent, respectively.

We have collated a list of rate-sensitive stocks that may be a good buy at current levels or on dips from a 3-4 weeks' perspective. Returns are calculated based on December 7 closing price:

The stock is trading near the lower band of an ascending channel. We expect a reversal from the support of this band.

We have observed that indicators like MACD and RSI (relative strength index) are showing momentum in the stock, and it is likely to continue. We recommend a buy above Rs 1,540, with a target of Rs 1,580 and a stop-loss of Rs 1,500. 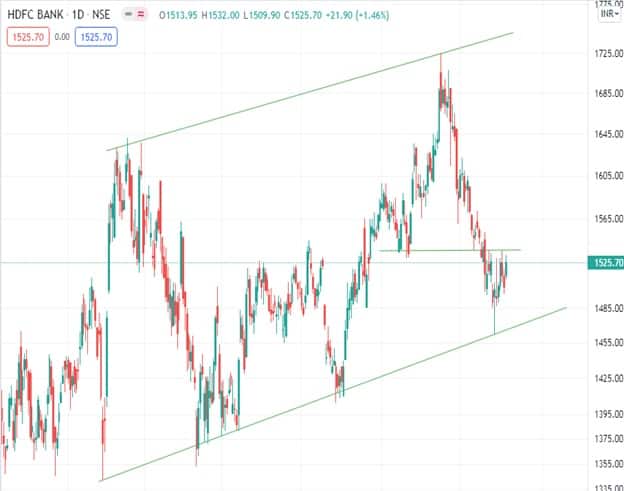 The stock has formed an ascending triangle and it has reversed from the lower band of the triangle. We expect a breakout of the ascending channel. We recommend a buy above Rs 7,210, with a target of Rs 7,320, and a stop-loss of Rs 7,070. 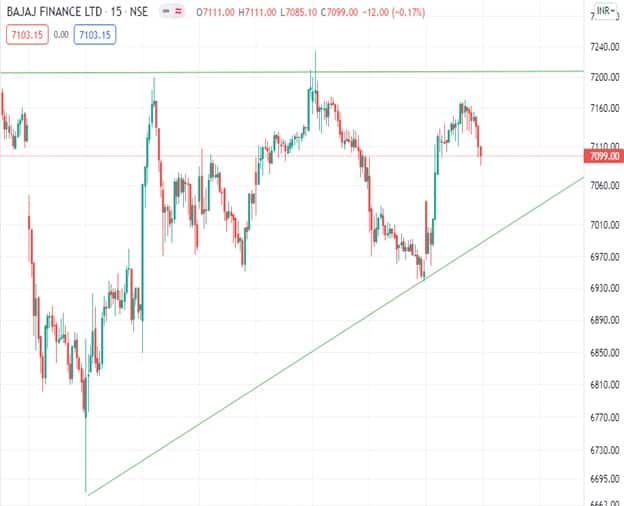 Sobha has formed an ascending triangle and has taken the support of the 200 EMA (exponential moving average) line. We expect a breakout of the ascending triangle above the level of Rs 875. We recommend a buy above Rs 875, with a target of Rs 925, and a stop-loss of Rs 825. 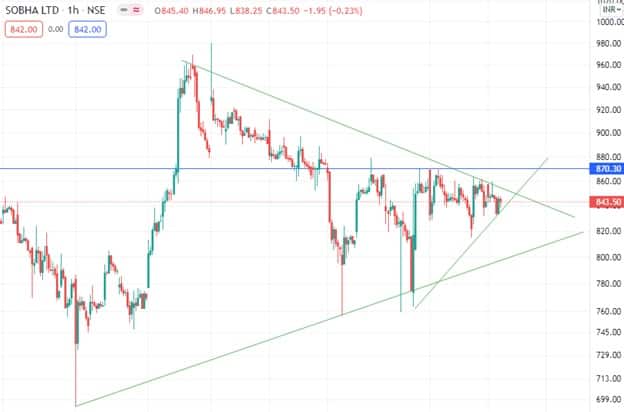 The price chart was in a rational uptrend from April 2021 to October 2021, with prices moving from Rs 530 to Rs 867. After the rational uptrend, we saw a gradual correction to around the Rs 700 level. This level corresponds to the 50 percent Fibonacci retracement of the earlier rise as marked in the chart.

The recent support comes on the back of volume play. Substantial open interest has been added to the current month futures around those levels. Open interest in futures at a 1- year high, and a momentum play on the bullish side provide a good risk-to-reward ratio.

We feel the uptrend has legs to take it to the pattern projection of Rs 867, the all-time highs. A stop-loss needs to be maintained around Rs 685, below which the pattern will negate.

The price chart has been in a 10-month-long classical Cup & Handle pattern, right from February 2021 to November 2021. The pattern was further accompanied by a bullish hinge formation recently at the 200-DMA (daily moving average), marked by the green line in the chart.

There also seems to be a convergence of the 100 & 200 DMA levels near this recent low, an augmentation for long-term supports.

We feel the uptrend has legs to take it to the pattern projection of Rs 2,200, with further opening of extensions to Rs 2,450. A stop-loss needs to be maintained around Rs 1,844, below which the pattern breaks the monthly supports.

The price chart has been in a 10-month long classical ‘Cup & Handle’ pattern, right from February 2021 to November 2021.

The recent support comes on the back of volume play as well as substantial support from the near the 200-DMA, which is marked by the green line in the chart.

We feel the uptrend has legs to take it to the all-time high of Rs 3,015, with a further extension pattern projection of Rs 3,300. A stop-loss needs to be maintained around Rs 2,642, the 200 DMA, below which the pattern breaks the swing lows.

The price chart has been in a rational uptrend from April 2021. Prices have moved from Rs 320 to Rs 550. The 100 DMA marked, by the blue line, has been respected all through, with three touch points in the current financial year.

After the rational uptrend, we saw a gradual correction to around the Rs 450 level. This level corresponds to one of the touch points on 100 DMA. The 200 DMA & 100 DMA are seen running parallel, indicating that the gradual uptrend is almost running at a 45 degree trend line.

We feel the uptrend has legs to take it to a high of Rs 545-550, the all-time high. A stop-loss needs to be maintained around Rs 439, a bit below the recent swing low.

DLF has seen strong a bullish candle in the last trading session, post consolidation near its 100-DEMA (day exponential moving average). Historically, 100 DEMA has provided a strong resurgence in the counter, followed by the positive crossover of the 14-period RSI to the signal line, suggesting a bullish stance.

The stock has even reversed from the lower band of the Bollinger Band and has headed towards the mean, affirming the bullish stance in the counter.

M&M Financial has corrected over 22 percent in the last couple of trading weeks to hover near the previous consolidation zone. Even the weekly candle of the last week construes a reversal set of pattern and any surge towards Rs 166 is expected to witness a trend reversal in the counter.

On the oscillator front, the 14-period RSI has seen a positive crossover from the oversold region, indicating a strong potential resurgence in the near future.

Axis Bank has plunged over 24 percent in the last couple of trading weeks from its all-time high zone and has tested the unfilled gap on the downside, from where the demand has triggered in. The previous week's candle indicates the price action to reach the over-sold region, and, going forward, a strong reversal could be expected in the counter.

The stock has reversed from the lower end of the Bollinger Band and has headed towards the mean affirming a strong long build up. 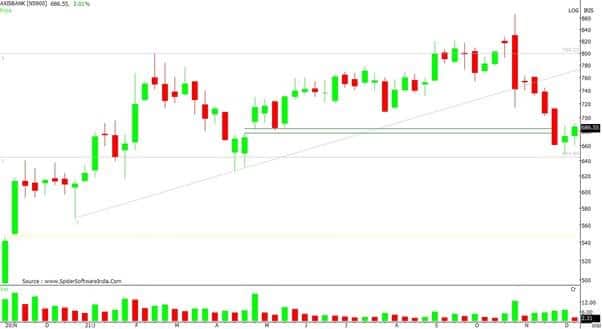 Disclaimer: The views and investment tips expressed by experts on Moneycontrol.com are their own and not that of the website or its management.
Sunil Shankar Matkar
Tags: #Market Edge #Nifty #Sensex #Stocks Views #Technicals
first published: Dec 8, 2021 03:45 pm