Promoters increased or decreased their holdings by 10% in these 20 cos in Q1; do you own any?

“Only when the tide goes out do you discover who's been swimming naked,” Warren Buffett once said.

The recent crash in price of stocks in which pledged shares were offloaded is an indication of excessive risk investors might be taking.

Pledging of shares is not essentially a bad practice. Companies often do that to meet liquidity needs, but at a time when the economy is showing signs of a slowdown,  companies with high promoter pledge could add to your risk. 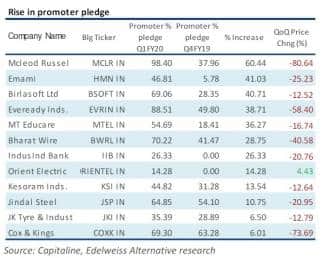 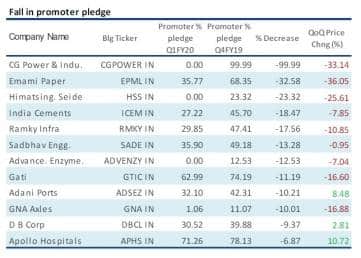 To reduce volatility and bring in more transparency, the market regulator SEBI, after a meeting on June 27, came out with stricter norms for pledging shares.

“SEBI intervention in terms of asking promoters to disclose the reason for pledging is very positive as now an investor would be able to make better-informed decisions,” Shailendra Kumar, Chief Investment Officer at Narnolia Financial Advisors Ltd, told Moneycontrol.  It would also require promoters to be more disciplined in their investment decisions, he said

“In the recent past, pledging of shares has become an important parameter to look into while investing in a company. The share price of many companies have seen a sharp erosion in value if promoters pledge is significantly high, particularly if promoter gets into some kind of financial stress,” he said.

Experts, too, advise caution while taking investment decisions in face of the trend of pledged shares.

If a promoter is pledging extra shares for the borrowing taken in the past, it is a sign that company’s financial assets are getting stressed.

“We feel investors should strictly avoid investing in all those companies involving a high level of pledging by promoters, as it reflects deteriorating fundamentals along with the company’s inability to raise funds through other viable options. Such stocks could continue to witness high volatility,” Ajit Mishra, Vice President, Research, Religare Broking Ltd, told Moneycontrol.

There are five companies in which promoters pledged shares for the first time in June quarter, says to Edelweiss report. Some of the names are GHCL (1.08 percent), Fredun Pharma (3.85 percent), Orient Electric (14.28 percent), IndusInd Bank (26.33 percent), and Indo-National (56.92 percent).

There 11 companies in which the pledge value exceeds $50 billion. These include Future Retail, JSW Energy, Adani Power, Jindal Steel, Sun Pharma, ZEE Entertainment, Asian Paints, and TCS among others.