Chart of the Day: Short dollar positions vanish from RBI’s books in April

The RBI has run off its short dollar positions and at the same time elongated its forward dollar purchases to manage the impact of its forex intervention on domestic rupee liquidity. 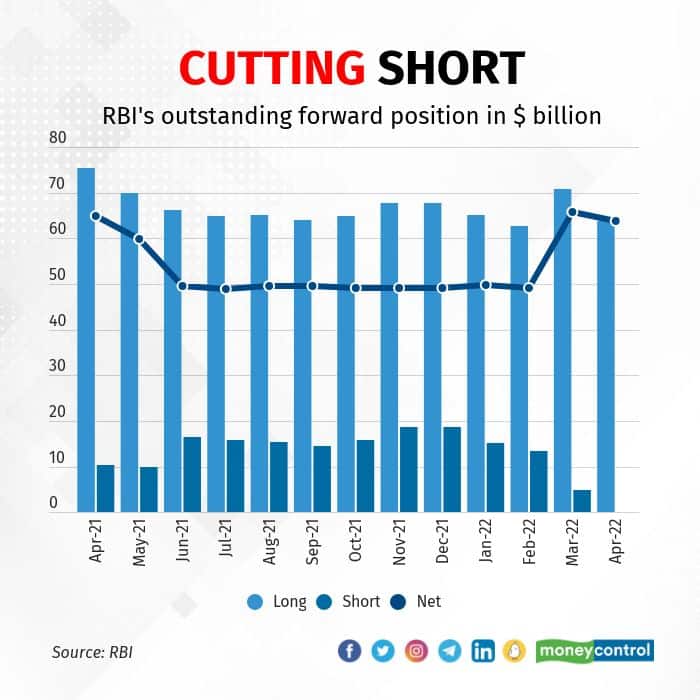 The Reserve Bank of India (RBI) has been intervening in the foreign exchange market frequently to manage the volatility and protect the exchange rate. In its endeavor, the RBI has increasingly relied on forward contracts wherein it postpones the impact of its forex interventions on rupee liquidity. The central bank sells and buys dollars through forward contracts. Forward contracts to sell dollars at a future date appear as short dollar positions in the RBI’s books while contracts to buy dollars appear as long dollar positions. In April, the RBI’s short dollar positions were nil, down from roughly $18 billion six months ago. This means that the central bank took delivery of past short dollar positions instead of rolling them over. On the other hand, the central bank has been rolling over its long dollar positions through sell/buy swap auctions. In a sell/buy swap, the central bank sells dollars in the spot market and simultaneously enters into a forward contract to buy dollars at a future date. Since the RBI is on a liquidity withdrawing mode, its decision to run off its short dollars makes sense as every time the RBI sells dollars, it buys rupees. At the same time, the central bank’s move to elongate its forward dollar purchase contracts through sell/buy swaps indicates it wants to postpone the addition of rupees into the market to a future date. The RBI has done two swap auctions of $5 billion each in March and April.
Moneycontrol News
Tags: #dollar/rupee #foreign exchange #RBI
first published: Jun 20, 2022 12:38 pm