Selling pressure intensified in the stock markets in the week ended October 29, with the Nifty 50 falling more than 5 percent from its record high (18,604) and 3.6 percent over two consecutive weeks as Morgan Stanley and Nomura downgraded Indian equities due to expensive valuations, dull global cues, FII selling, and inflationary pressure seen on earnings.

The index declined towards 17,600 levels as the October expiry day and the first day of November series had intense selling pressure, with a bearish candlestick pattern formation on both the weekly charts. It was the biggest weekly fall in almost eight months as selling pressure was seen in all sectors.

Experts said the Nifty 50 may find support at about 17,500 in the coming days, while the 18,000 mark would be a crucial resistance level in an uptrend.

“Due to this late dominance from bears, we can observe a few important developments on the charts. Firstly, the ‘lower top lower bottom’ on the daily chart after breaking below 18,000, which coincided with the violation of the key short-term moving average of 20-day EMA (exponential moving average),” said Sameet Chavan, chief analyst-technical and derivatives, at Angel One. “More importantly, if we take a glance at the monthly chart, we can see a formation of a ‘shooting star’ pattern, which certainly does not bode well for the bulls.”

Chavan said the market is a bit oversold. There may be some relief in between, but traders should not get carried away by such rebounds.

“On the higher side, 18,000-18,100 would now be seen as immediate hurdles and any bounce-back towards it should be used to lighten up longs,” he said.

On the flipside, the market may slip towards 17,450 first and if things worsened, then the possibility of sliding towards 17,200-17,000 cannot be ruled out, said Chavan, who reiterated on staying light and avoiding any bottom-fishing for a while.

Here are 10 trading ideas by experts for the next 3-4 weeks. Returns are based on October 29 closing prices:

The stock has been following an uptrend and has reversed from the support of the 40-day moving average. It is expected to follow the ascending channel. 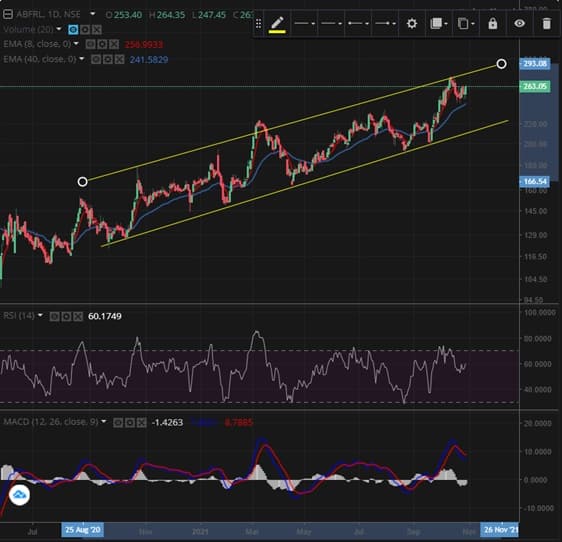 The stock is trading near the lower band of an ascending channel. We expect bullish sentiment in the stock from the support and the momentum to continue. It has also taken a support of EMA 200 line. 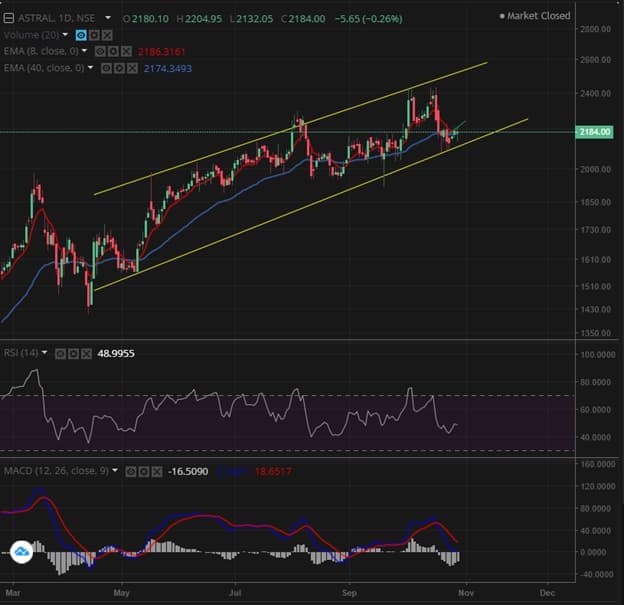 Indicators like MACD and RSI suggest positive momentum. We recommend a ‘buy’ on Bata India above Rs 2,010 with a target of Rs 2,300. Investors are advised to maintain a stop-loss of Rs 1,820. 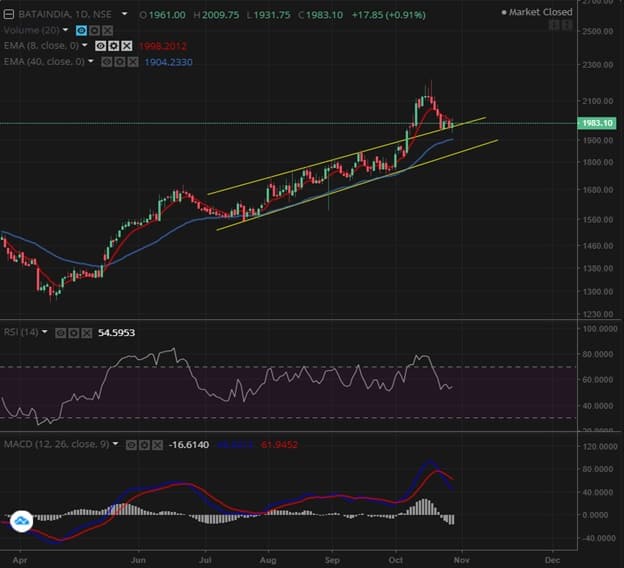 Bharti Airtel is in a pennant formation and has been following an uptrend. We expect a breakout in the stock above levels of Rs 720.

MACD and RSI indicate a positive momentum. We recommend a ‘buy’ on Bharti Airtel above Rs 720 with a target of Rs 800. Investors are advised to maintain a stop-loss of Rs 665.09 The whole formation has taken place above the 50 DMA, indicating strength in the uptrend. A breakout above Rs 1,575 will launch it in the next leg of the pattern, with projections through Rs 1,850.

A stop loss needs to be maintained at about Rs 1,250, below which the pattern will negate.

After a ‘corrective’ phase between July and August, the stock started gradually rising towards Rs 7,800, which was met with a second-level corrective that saw it touch the 50 percent retracement level of Rs 7,200, as marked on the chart.

The pattern has taken support at the 50 percent mark, as accompanied by above-average volumes. The uptrend has legs to take it to the pattern projection of Rs 8,400, which also happens to be the 52-week high.

A stop loss needs to be maintained at about Rs 7,050, below which the pattern breaks the monthly supports.

After a rectangle formation between Rs 900 and Rs 1,150 in the first eight  months of calendar 2021, the prices broke above the consolidation in September.

The breakout saw prices move to Rs 1,350 after which it retraced 50 percent to Rs 1,150 levels, as marked in the chart. The daily price pattern has engulfed prices of whole of the week and indicates that bulls are in control currently.

The uptrend has legs to take it to pattern projection of Rs 1,550. A stop-loss needs to be maintained at about Rs 1,070, below which the pattern breaks the 20 DMA rather convincingly.

The stock is in the corrective mode and it reversed sharply after hitting the retracement support at Rs 490. It is in the strong uptrend and the current ongoing pattern will be an opportunity to buy with a medium-term view. It has resistance at Rs 515 and at Rs 525. Keep a stop-loss at Rs 485 for creating long positions at current levels. 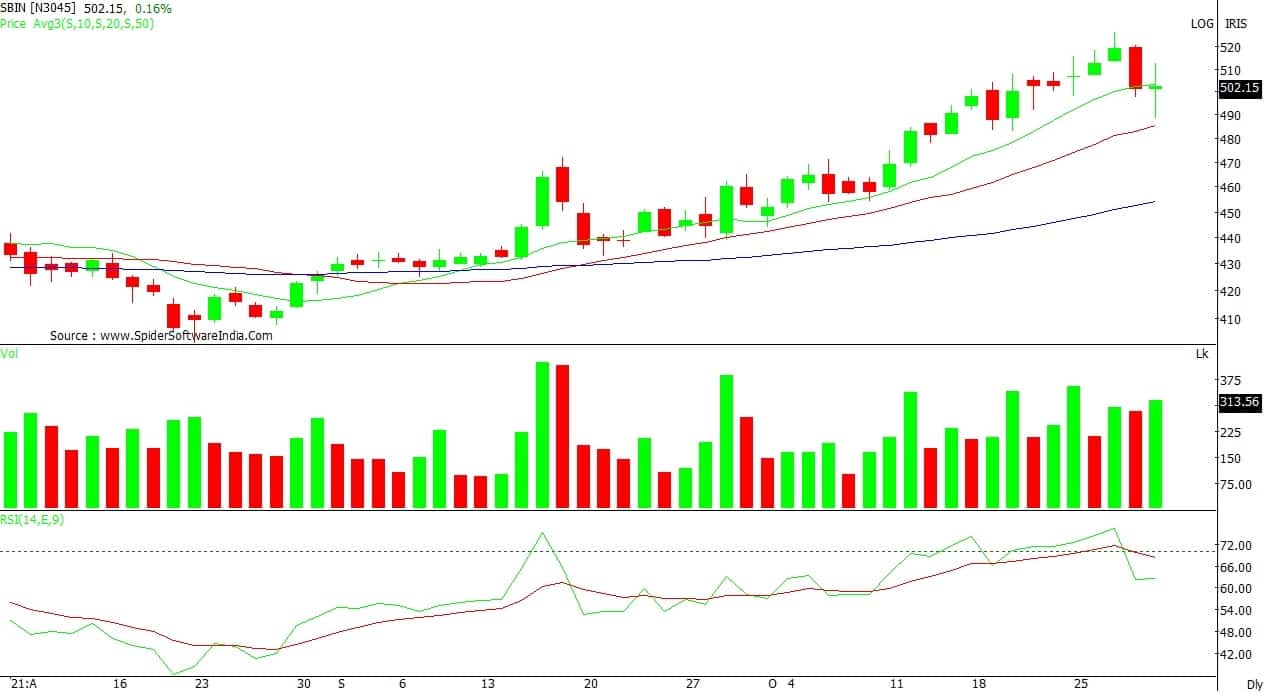 The stock was forming a bullish flag pattern, which is part of a bullish consolidation. Technically, such a pattern offers a significant and trending-up move. It is the most outperforming stock in the auto basket. Keep a stop-loss at Rs 1,520. The stock was falling from Rs 1,267 levels and found buying interest at about Rs 900 levels, along with positive divergence on a daily chart. It’s a time to buy with a decent risk-reward ratio. Keep a stop-loss at Rs 874 for buying the stock with a price target of Rs 1,000 and Rs 1,060. Expert: Sameet Chavan, Chief Analyst-Technical and Derivatives at Angel One

This has been a steady performer over the past year and a half. Recently, a lot of stocks, especially from the broader market, underwent a decent price correction. This stock seems to have been an exception and also managed to clock a fresh record high this week, which is a sign of inherent strength.

Technically speaking, we can see the stock traversing the ‘neckline’ level of Rs 340 with a substantial rise in volumes. In addition, the stock price remained quiet when we witnessed a strong correction in the market in the last couple of sessions.

We expect this outperformance to continue and despite having a cautious stance on the market, we recommend buying on a decline at 335-325 for a short-term target of Rs 385. The stop-loss can be placed at Rs 298. 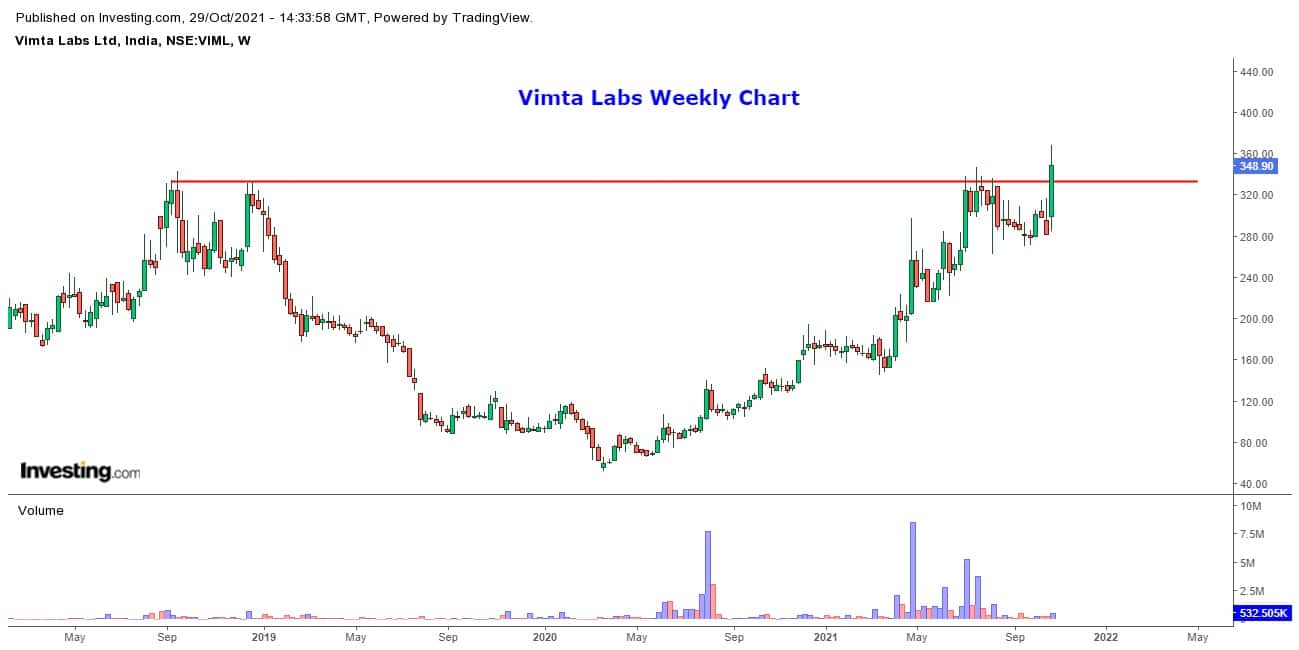