Having multiple models in the SUV space is a priority for the company and it has to be done quickly, says Maruti Suzuki executive director Shashank Srivastava

Automotive market leader Maruti Suzuki India has been a formidable force in the subcontinent since its cars started rolling out some four decades ago — the 800, Zen Esteem and Maruti Van became synonymous with mobility. In that time it has bolstered its positioning as a maker of affordable cars with low-cost ownership and a national distribution and service network that is without comparison.

In the last two decades, however, the markets have opened and changed with other foreign players entering. Watching the consumer evolve, new segments have sprung up and led to the appetite for new body styles such as the sports utility vehicles (SUV), multi-purpose vehicles (MPV), cross-overs and other related models.

While its success in the MPV space is self-evident, the company recognises that it has to shift gears on its mid-range SUV portfolio. Maruti Suzuki’s entry level-SUV market share is at around 20 percent (Brezza) but the S-Cross is the only model it has in the mid-range bracket, which is also a category that has tons of competition with Hyundai’s Creta, Tata Harrier, MG Hector, Kia Seltos and so on. As a matter of industry statistics, that particular segment has some 47 models and Maruti has only 2 products. Those two products throw up around 4.5 percent market share, which means they are punching above their weight; but clearly, more models are needed. 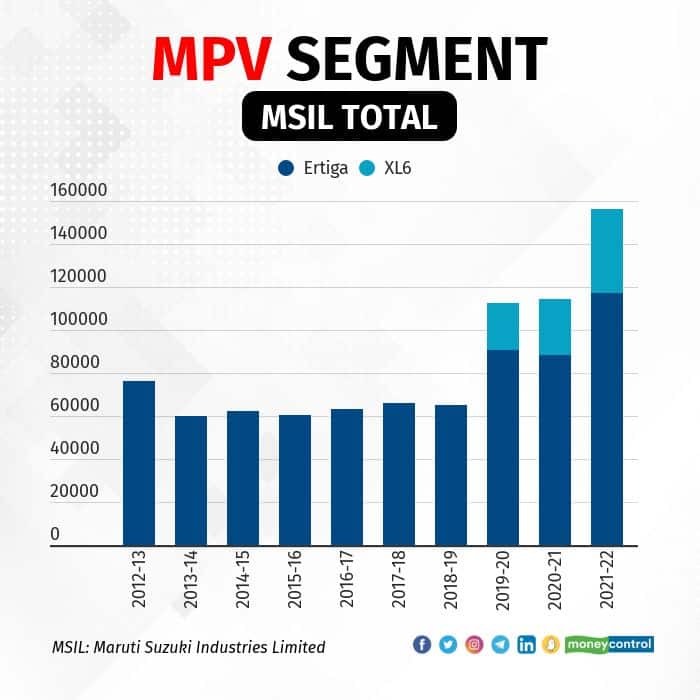 Shashank Srivastava, executive director at Maruti Suzuki, agrees: “I can’t give you an actual number but we do need to bring in multiple models in the SUV space,” he says. “It has to be done and will be done fast and is a priority for the company for sure.”

Keenly aware that its continued dominance will have to be spread across a variety of segments, MSIL has been tapping emerging segments along the way. Take, for example, the MPV category, which has been dominated by Toyota and its best-seller the Innova for the longest time. While Maruti did make a value-priced version called the Ertiga a few years ago, it also upped the ante in the MPV game with the XL6 (sold through its premium Nexa dealers) a couple of years ago.

The XL6, which has been priced between Rs 11 lakh and Rs 14.4 lakh (ex-showroom), has boosted the company’s overall numbers IN THE MPV SEGMENT.  The Ertiga and XL6 COMBINED TOTAL UP TO north of 150,000 cars a year in sales or over 60 percent market share OF THAT SEGMENT. The company has also gained valuable insights into the consumer demand for utility vehicles – something it didn’t have in the past.

“As an example, what we have found from our research is that the MPV is longer than just a people carrier. It is now being used by people with small families and large families but it’s also being used by young couples, or even individuals, and is now becoming more of a lifestyle-oriented car,” says Srivastava. “That is the reason we have introduced features that are otherwise not required for a utility vehicle. For example, in the XL6, we introduced 16-inch machine alloy wheels and ventilated seats.”

Srivastava adds that while space was once the No. 1 criteria for buyers in the MPV category, it is now design that is taking precedence. “Design and features have become the top two criteria for purchase; it used to be price and space earlier,” he emphasises.

How the segment evolved

In any case, the segment has evolved tremendously since 2012.  “Between 2003 and 2012, the entire category generated sales of 65,000–70,000 units, accounting for roughly 2 percent of the entire market,” Srivastava adds. At that time the Innova commanded close to 100 percent of the segment. Maruti’s Ertiga was launched in 2012 and in a year or two started generating sales of around 5,000 units a month, thereby growing the overall pie.

By 2018, there were other players and the MPV (Multi-purpose vehicles) segment had grown to 6 percent of the overall car sales market — a sizable chunk for serious players — which is when Maruti launched its XL6 (2019). Last year, the overall segment was at over 250,000 units, of which Maruti now has around 60 percent market share.

Is there a danger of cannibalisation between the two MPVs it makes? Maruti doesn’t think so. “So, if you see, the exterior styling is clearly different. The Ertiga is more conservative and the XL6 more aggressive, rugged, more SUV-like, with its shoulder lines and larger wheels,” says Srivastava – alluding that the two cater to different buyers.

The other interesting thing is that the customer base itself is very different.  “The average income of the XL6 owner is much higher than that of the Ertiga customer. The statistics on monthly household income are Rs 76,000-77,000 for Ertiga and Rs 102,000-103,000 for the XL6,” says Srivastava.

Why has  the MPV segment grown like it has? “An MPV provides the flexibility in utility desired by many Indian buyers as it can be a lifestyle car as well as a people mover. Hence in terms of value proposition, it scores high. Additionally, its popularity in the taxi segment also pushes the sales numbers higher,” says Suraj Ghosh, Director, S&P Mobility. “At a mass level, from a price perspective, Maruti leads the segment with its popular Ertiga and XL6 models, but in the higher-price segment, the Toyota Innova is the undisputed leader.”

This is enticing other OEMs to consider a presence in the segment as well. “We already have 3-row versions of popular SUVs being introduced, like the Tata Safari, Kia Carens and Hyundai Alcazar. So, we expect to see more competition in the segment in the coming time, " Ghosh added.