Homecoming of several local chefs to start their own enterprises has a lot to do with Goa becoming the unofficial food and beverage capital of India, and investors keen to capitalize on this.

Priyanka Sardessai studied at the Culinary Institute of America, and returned to set up Larder + Folk in Panjim, Goa.

Until a few years ago, Goan chefs often packed up their knives for better opportunities and greater exposure on foreign shores. And rightly so. A more competitive environment can help us to grow quickly. Lately, though, several of these chefs have returned. After travelling and working around the world, they have discovered greater work satisfaction and success in their home state.

Chef Pablo Miranda says, “I would hear people saying that Goa was only about shacks and bars, and only the cities have the best restaurants.” Naturally, then, chefs with fire in their bellies were wary of working here beyond the usual five-star hotels experience.

Wannabe chefs might think that going to culinary school paves the path to culinary greatness. But that is just the beginning. A typical career path involves: culinary school, long hours, accountability to seniors, and at times, limited or no satisfaction. When chefs finally settle down after years of learning and gaining experience, starting something of their own, often in their home-town, is when the ultimate joy of being a chef is experienced.

A decade ago, Chef Avinash Martins of Cavatina started this trend, when he returned home after global sojourns, as he “could never get the smell of my land, my surroundings, the people, out of my system and knew I had to get back to Goa and start a restaurant here.”

The sentiment remains the same even today. Chef Pablo Miranda has been away from his home-town Goa for several years, devouring all the experience that came his way. Yet, he returned to Goa and started Patrão's Deli, Antonio at 31 and Makutsu, a Japanese Yakitori place in Panjim. He says, “Being away for such a long time made me miss home and Goan food. I had learnt as much as I could, working at Quique Dacosta in Spain and thought it was time to put that experience to use in Goa.”

For Priyanka Sardessai, chef and co-owner, Larder + Folk, Panjim, who studied at the Culinary Institute of America, it had to be Goa too, as apart, from being home, “Goa is where it all began. The restaurant industry in Goa, has influenced my career... The dream has always been to bring all my food knowledge and experience to my own home turf and my people.”

Echoing her sentiment is Ralph Prazeres of Padaria Prazeres, an eponymous Portuguese bakery in Panjim. After studying Hospitality in Lavasa, he moved to London and later, Le Cordon Bleu. Thereafter, he worked across London, including, St John’s Bread and Wine, but knew he “would ultimately return to Goa,” where he belongs and his family runs hotels. “I always dreamt of bringing back what I have learnt abroad and do something better in Goa.” 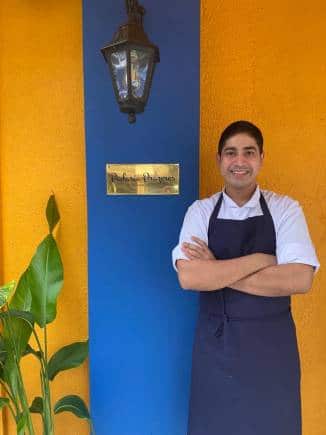 The pandemic, undoubtedly, has been instrumental in many returning and some have embarked upon culinary adventures that turned into successful businesses. “I had plans to move out of India once more, after seeing the restaurants in Goa having no clear driven concept or food focus. The lockdown made me see a gap in the market and what Goa needed. What started as a home kitchen, slowly grew into the three brands we have today,” explains Miranda.

Sardessai’s story is similar. She headed back home as she was,  “Missing a good fish thali.” On a serious note, she says, “Upon returning, I worked with Chef Amninder Sandhu in Mumbai until the first lockdown. I found my way back to Goa from Mumbai during the lockdown and started kitchen trials in my mum’s kitchen and decided to launch a small home-business. That's where the idea of Larder + Folk began.”

Goa beckons for other reasons

For Roystern Dsouza of Bhatti Village, Nerul, the reasons of homecoming were quite different. “My parents, Patrick and Merciana Dsouza, have successfully been running Bhatti Village, a Goan food restaurant, for years now, wowing the palate of gourmands with local  food. Although I managed to coax them into allowing me to get a formal degree in hospitality and even work for a while at Trident Oberoi in Mumbai, ultimately I had to get back to help them, as they are getting on in years and needed me, being the only child,” he says. However, lending his marketing and communications expertise to the business and displaying his flair as a chef, has certainly helped. Chef Rohan D’souza of Goa restaurants Pisco by the Beach, The Lazy Goose and Toro Toro, is a Goan but has been working in Mumbai and across the world. No matter where he works, he gravitates back to Goa. He explains, “Goa has always been home, but I have two other successful restaurants operational for the last five years. I shuttle between Mumbai and Goa, which is my main culinary base, as I hold the position of culinary director, Silver Beach Hospitality, for the last eight years.”

Being a Goan and starting something of your own in Goa would naturally give you an edge one would imagine, but the struggle is still real.

Prazeres opines, “It helps that we’ve grown up here and know the lay of the land, so to speak, which helps get things done here. However, we started with a zero customer base.”

Sardessai feels that having grown up in Panjim and Konkani being her mother-tongue has helped her with vendors and suppliers. But adds, “Ease of doing business in Goa was not a consideration, because no part of starting my own business was easy. I have faced my own share of hurdles and obstacles to get Larder + Folk up and running.”

Miranda says, “Being on home turf and having friends and family as a ready support, is always an added bonus. Having knowledge of what produce Goa has to offer or what to expect through the year, what locations are doing well or are untapped, gives us an edge.”

Rohan D’souza, on the contrary, feels, “Goa being the leading hospitality destination has not guided my decision of opening another venue in Goa. Yes, there are several players coming to Goa thinking it’s lucrative, but the ground reality is that operating here is also the toughest in terms of infrastructure, manpower. So it’s basically, survival of the fittest.” He adds, “We do get support from the local clientele, who are proud that a local entrepreneur is doing something. Also being a local, gets you support from your suppliers and the neighbourhood.” 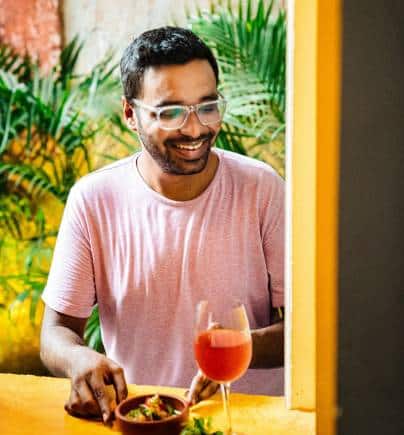 Miranda feels that earlier, Goa was never taken seriously. The new food and beverage destination avatar of Goa state has changed things. “During the lockdown, I really saw a change in people's mind-set, now looking locally for what's best on offer, rather than travelling abroad for an experience.”

Sardessai too finds that the Goa market is happening now and the competition is exciting.

The Goan Chefs who are home now say they realise that Goa is the place to be, and they are determined to make a success of it.