Both the ruling TMC and the challenger BJP have made promises and tried to woo voters with development schemes and sops in North Bengal, which went to the polls last week.

There is a kind of a hush in north Bengal where tea plantation workers, including those in the world’s finest gardens, voted last week in the hope that their demands for better livelihood could finally be met.

The plantation workers are on tenterhooks. The ruling Trinamool Congress (TMC), the Bharatiya Janata Party (BJP) - the challenger - and the Left Front have all promised them the moon in the run-up to the assembly elections.

Everyone has said all closed plantations will reopen and over 60,000 jobless workers will have jobs. It could be a Central government job, or a state government job. It sounds like the tale of the horse and the carrot.

The TMC said it will take over 14 tea gardens but that has not happened, and the Central promise of taking over 10 tea gardens also remains unfulfilled because the TMC nixed the BJP’s plans by slowing down New Delhi’s move to gain a toehold in the plantations.

There is no guarantee on deliverables.

The demands of the workers at the region’s 408 plantations have been pending for more than half a century. Most plantation workers in Jalpaiguri, Darjeeling and Alipurduar belong to the hill tribes of Gorkhas, Mundas and Oraons.

The tribals are key to 16 out of 45 assembly seats in North Bengal.

The tea industry is the second-largest employer in India. Assam has over 700,000 workers in the plantations, North Bengal has nearly 400,000 workers.

North Bengal produces some of the most popular tea varieties from India, including the champagne of teas that is considered to be the most expensive in the world. Yet plantation workers in this region take home a pittance - a daily allowance of Rs 202, one kilo of rice or wheat offered at 50 paisa per day and a ration of cereals, vegetables, edible oil, spices and salt totalling less than Rs 160. The daily allowance of Rs 202 adds up to a little over Rs 6,000 per month, and then there is a bonus and free medical care and education. Overall, it comes to around Rs 8,000 per month.

In many gardens, salaries often come once in four months.

Last week, Darjeeling tea was selling for £25 (over Rs 2,600 at the current exchange rate) for 40 grams in the stores of the United Kingdom. The inexpensive CTC (crush, tear and curl) variety that is immensely popular among the masses in India is sold for anywhere between Rs 150-400 per kilo.

Yet, it has not been easy to hike wages in the gardens. For a long time, there has been no consensus on the wages. In 2015, daily cash wages were fixed at Rs 176 per worker. And then, Rs 26 was added during the wage hike of 2021.

So, effectively, Rs 26 was added in the last six years. Worse, arrears ranging from Rs 25,000-35,000 were not paid and are still pending for the last three years.

The tea gardens in Bengal are a peculiar story of despair and death. Workers are now wondering which political party will actually reshape their fortunes.
- Abhaya Basu, development worker

“Tea garden workers continue to be in the dumps,” says Abhijit Mazumdar, son of Naxalite leader Charu Mazumdar who worked in the tea gardens and was responsible, along with his friend Kanu Sanyal, for a militant peasant uprising in the tea gardens in Naxalbari in 1967. Mazumdar and his band of people were later known as the Naxalites. “Five decades have passed but conditions of workers in the tea gardens in North Bengal have not improved,” says Mazumdar.

This time, hope for a better life has been growing ever since the Prime Minister told an election rally in Bengal on April 6, 2020, that he was also a tea seller once. Earlier, Home Minister Amit Shah had launched BJP’s Mission Bengal programme from Naxalbari on April 25, 2017.

The BJP tasted success in the 2019 Lok Sabha polls, but this time, it could be a tough fight because the workers want to be sanguine about their ultimate saviour.

“The tea gardens in Bengal are a peculiar story of despair and death. Workers are now wondering which political party will actually reshape their fortunes,” says Abhaya Basu, whose Iccheybari outfit works on a host of developmental programmes in North Bengal.

There are other issues. The Mahatma Gandhi National Rural Employment Guarantee Act (MGNREGA) is symbolically implemented. The workers rarely get the promised 100 days of work per year rarely happens - most get only 30-50 days of employment.

Basu says the plantation workers are observing each political party carefully. The workers also know that not all of them produce high-quality teas which fetch astronomical prices in the international markets. Of the 408 gardens, 84 are in the hills and produce the finest variety, globally popular as Darjeeling tea. The rest are in the Dooars and Terai regions, close to the Bhutan border. The gardens in Terai and Dooars produce the CTC variety.

The tea gardens in North Bengal are mired in politics. Each garden has over six trade unions, as compared to one per garden in Assam.
- Sandip Ghosh, secretary (sustainability), Indian Tea Association

Sandip Ghosh, secretary (sustainability) at the Kolkata-based Indian Tea Association (ITA), says the North Bengal plantations are hugely complex because of a host of issues. “The nature of the tea gardens in North Bengal is quite different from that in Assam,” he says. Assam produces 50% of India’s total tea production of 1339 million kilos (2019-20). Bengal produces around 20% of the annual production in India, Darjeeling plantations produce 8-9% of India’s annual production.

“One cannot deny the fact that tea gardens in North Bengal are mired in politics. Each garden has over six trade unions - as compared to one per garden in Assam,” Ghosh says.

The Left Front once ruled the tea gardens before TMC made inroads in the 2016 assembly elections, winning eight of the 16 seats. But the BJP - whose powerful Bharatiya Tea Workers Union (BTWU) is backed by the Rashtriya Swayamsevak Sangh (RSS) - literally walked through the three districts, leading in all 16 assembly segments.

“I think it would be wrong to say the workers are suffering. They get fairly good benefits from the owners and have - actually - no reason to complain. The rice or wheat which a worker gets at a bare minimal price is procured from the market for Rs 25 a kilo. The workers have full medical facilities, including free ambulances,” says Ghosh.

But when elections come, everyone has a fresh set of demands which the political parties must fulfil.

Locals say the BTWU has a solid grip on as many as 200 tea gardens in the region. In short, it means workers in nearly half of the tea gardens in North Bengal, are now under the influence of the right-wing. This is good news for the BJP.

The TMC has been launching a number of schemes for the plantation workers. Case in point: the Rs 500 crore Chaa Sundari housing scheme which was launched early this year for an estimated 300,000 permanent workers in 370 of the tea gardens who do not have a house of their own.

It is a huge task to transform the gardens. We only live in hope.
- Julian Oraon, tea garden worker

North Bengal Development Minister Rabindranath Ghosh says the programme will change the face of the tea gardens. “The West Bengal government cares for its tea gardens and its workers,” Ghosh says.

But the reality is that the state government has appointed financiers for the gardens and is still working out the modalities of resuming work at the plantations. And with elections announced, plans to open the gardens and resume operations have all but stopped. Unpaid provident fund dues of workers is another big issue. In short, work has not resumed.

Not to be left behind, the BJP also promised in 2019 that the Centre would take over 10 closed gardens. But the move backfired because of a lukewarm response from the state government. The TMC realised that the BJP would score brownie points if the Centre takes over the tea gardens. As a result, the files remained stuck.

North Bengal has 19 closed gardens, and 60,000 unemployed workers and their families.

The TMC has tied up with Bimal Gurung’s Gorkha Janmukti Morcha, which has considerable support among the Gorkha population in the tea gardens. The BJP, which does not have a tie up with any local party, is also hoping support will come from the plantation workers under the control of BTWU.

“The tea gardens of North Bengal need a complete overhaul, workers are leaving the gardens and migrating to other states to work as construction labour. They need to be brought back,” says BJP general secretary and Darjeeling MP Raju Bista. He adds that it was at the initiative of the BTWU that Union finance minister Nirmala Sitharaman met tea workers in Siliguri on April 14, 2020, and promised a hike in their daily wages.

Both TMC and BJP are playing up their agenda, which is mostly on paper. Sitharaman provisioned Rs 1,000 crore for the welfare of tea plantation workers of West Bengal and Assam in the last budget. West Bengal Chief Minister Mamata Banerjee announced a Rs 150 crore package for the state's tea garden workers. But the cash is stuck in the files, and has not reached the gardens. 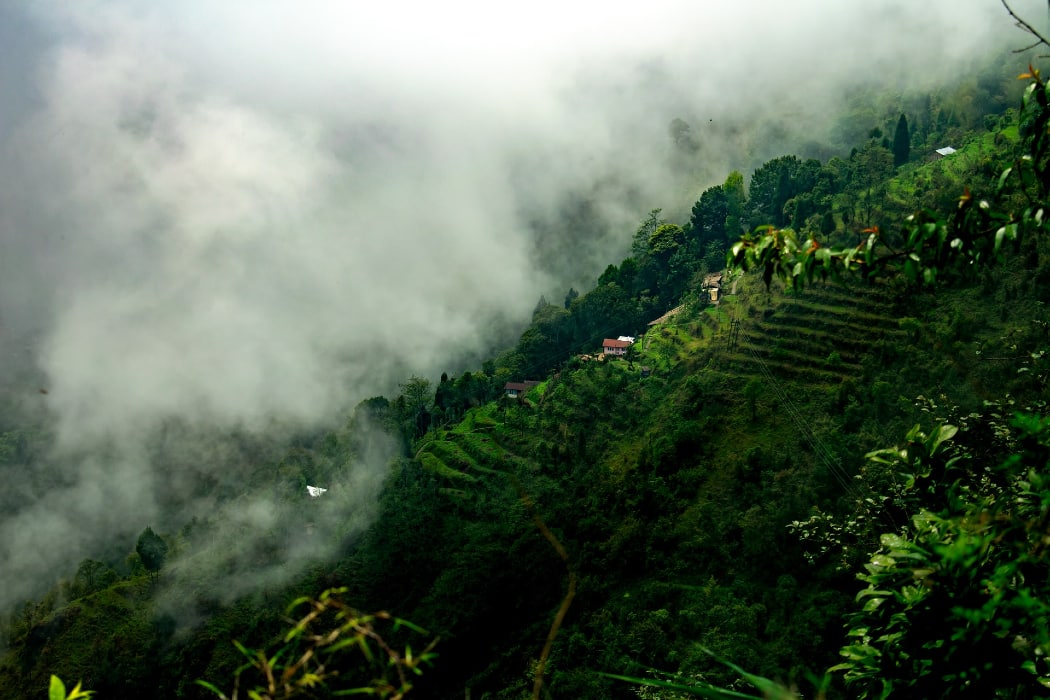 Of the 408 plantations in North Bengal, 84 are in the hills of Darjeeling - these gardens contribute 8-9% of India's total annual tea production.

Many say the tea gardens are being taken on lease by promoters who lack prior experience in the industry. They neither look after the existing bushes nor plant new ones. They start plucking but do not have any factories to crush leaves. It is a half-baked work. Cash from Tea Board India, a near-toothless Central government agency, is routinely siphoned off.

There is an old saying in North Bengal: Tea gardens are your family, if you do not nurture the bushes, you lose your family (read livelihood). People cite the example of Duncans tea which closed down 12 gardens in 2015 in the plains of North Bengal. Over 20,000 permanent workers and an equal number of casual workers lost their jobs.

“It is a huge task to transform the gardens. We only live in hope,” says Julian Oraon, a tea garden worker. He has been out of a job for over a year now, and works at a roadside tea stall.

“It will never happen,” says Oraon. He says he wants salaries on time, ration on time, homes close to the tea gardens and schools for children. It is there, but in bits and pieces.