Of course, Mercedes-Benz isn’t the first one to showcase this party trick, but it does it do it really well and this showing we received with the GLC 300d Coupe.

If there was ever something to be said about coupe SUVs, it is this: What’s the point? Why take a big SUV and make a sportscar out of it? The obvious answer to that is, why not?

Of course, Mercedes-Benz isn’t the first one to showcase this party trick, but it does do it really well and this showing we received with the GLC 300d Coupe.

In India, the GLC Coupe was only available in its AMG guise and now, along with the facelift, Mercedes-Benz is also assembling the non-AMG spec GLC in our country. Of course, you can also have the AMG variant, the GLC 43 4MATIC.

Does it look the part?

In terms of styling GLC Coupe is very similar to the standard GLC, but that can only be seen from the front and off to the side and the rear, takes a slightly sportier approach. And this is what most blue-blooded SUV enthusiasts don’t like. The steeply raked roofline, the notchback bootlid, all work together to allow for someone like me to appreciate how a big car can look fast, too. But a coupe SUV isn’t anything if it doesn’t look like an SUV, too. To do this, the company has added some rather nice styling elements too. The front grille is not big, but its not too tiny either. Flanking that, are slightly more aggressive looking headlamps and the chrome skidplate is pure SUV. At the back too, the tail lamps work wonderfully to accentuate how wide this car is. And then you have the 19-inch alloys rounded off with the running board and the slim, but important blacked cladding on the wheel arches.

What about the inside?

The cabin-room on the inside does take a little bit of a turn and that is mainly for the passengers in the back. That is to be expected considering the raked roof, but it honestly is nothing to be worried about. Even with the front seats adjusted to the average passenger’s comfort level, there is more than adequate room in the back in terms of knee room. Headroom however, is just a little pinch, but there is a cut-out in the roof so that is mostly fine. 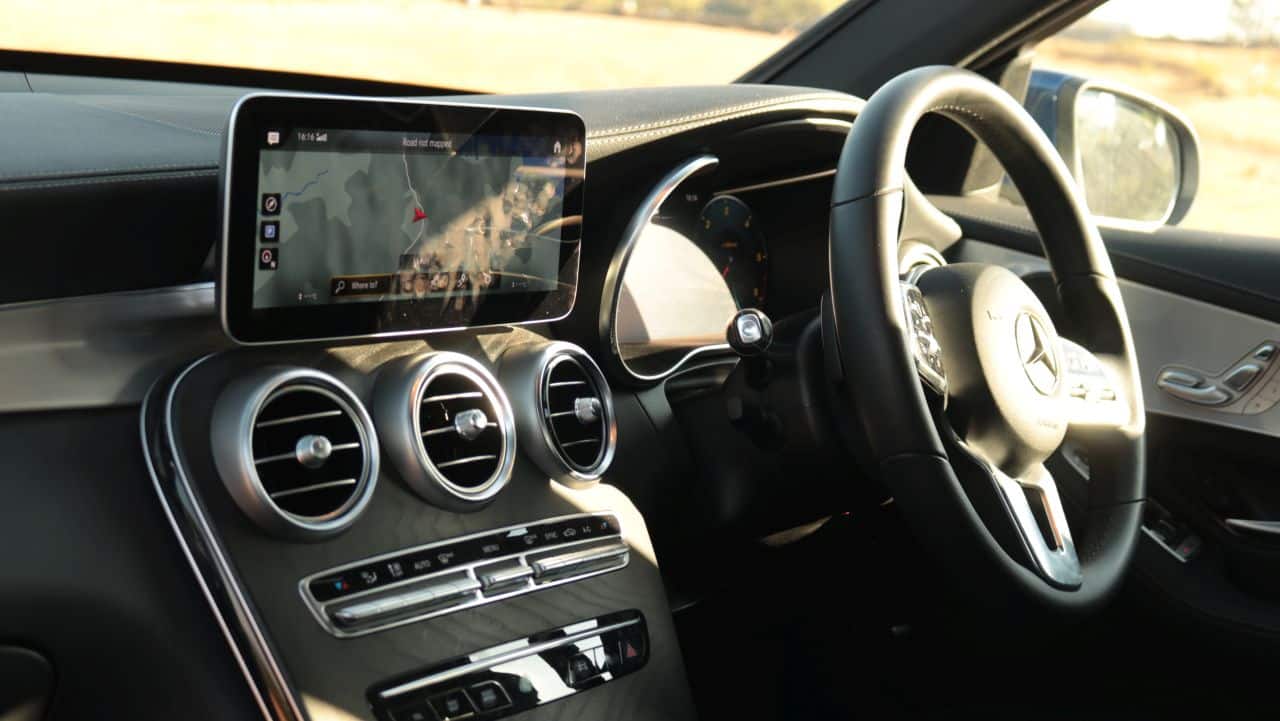 As for the luxury bits, this is the C-Class of the Mercedes-Benz SUV lineup, and although you do miss out on what E-Class and S-Class receive, there are oodles of toys to play around with.

First off is the new Mercedes MBUX connectivity system that allows for the connected car experience. But the bigger update to this is the larger 10.25-inch screen which is now touch responsive. Of course, you also have the touch-pad in the centre console as well as the two tiny touchpads on the steering wheel. Then there is the instrument cluster. While in the standard, you get two analogues, the Coupe gets a digital dash with simulated dials. The right dial stays fixed on the speedometer, the left one however can be customised to show other information including the built-in navigation system. The rest is very Mercedes as well.

You get customisable ambient lighting, leather and wood trim all around and a spattering of chrome just for that upmarket feel. What I do have a problem with however, is the use of Type-C USB charging ports everywhere. A Type-A port or two would have been helpful considering not all mobile phone manufacturers supply Type-C to Type-C cables out of the box.

Let’s talk about the ride

The GLC Coupe uses slightly souped up versions of the standard 2-litre units. The 300d’s diesel produces 245 PS of power and 500 Nm of torque, something our car used very efficiently. Throttle response is brilliant even in comfort mode, but the kick-down acceleration could have been a tad better. It still offers a decent amount of grunt even in the lightest of traffic conditions, something we don’t really see in city streets. In sport mode, everything feels almost immediately better than you would imagine too. The steering is more responsive, suspension is stiffer and the engine thrums louder as the revs rise. 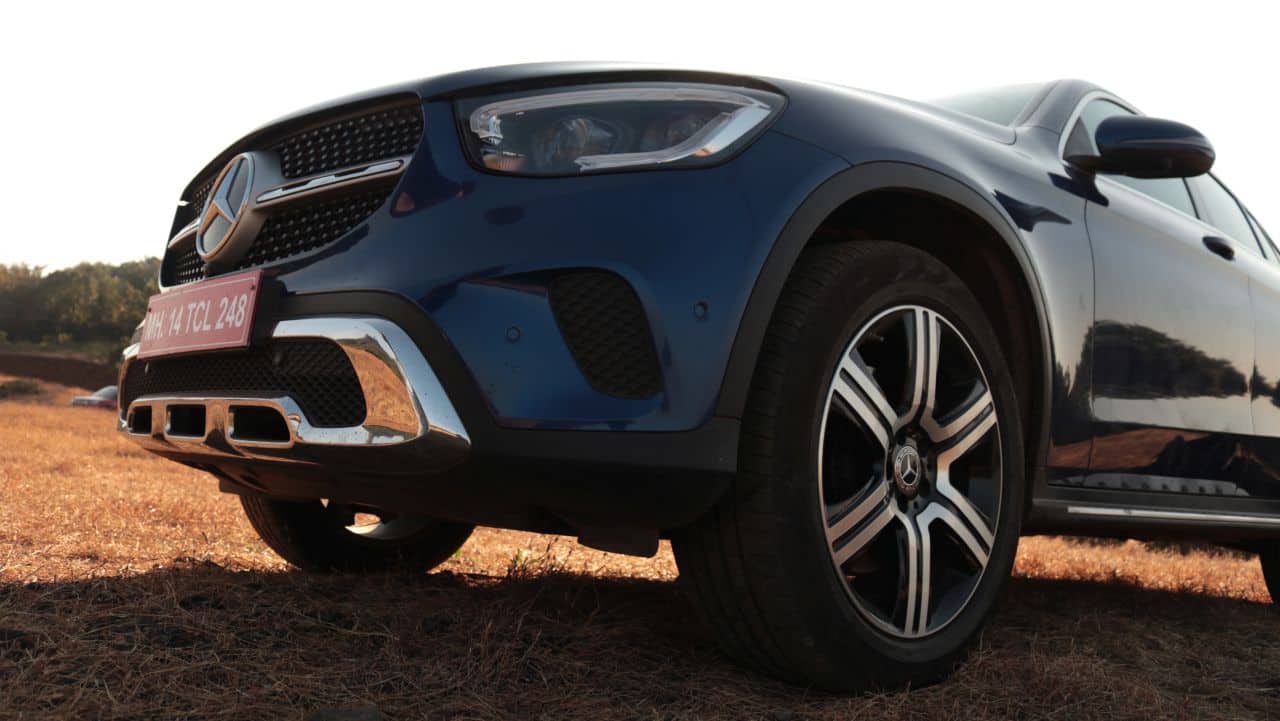 The Coupe is amazing on the highways, and suspension, although a little on the stiff side seems to be ok. Rough roads may toss you around a little, but mild imperfections will, for the most part, disappear. There is a bit of roll in the cabin, but that’s to be expected in a big SUV.

It is safe too

The GLC Coupe, gets the full suite of Mercedes-Benz’s safety tech. Airbags all around to protect you, the Pre-safe system that tensions the seat-belt in case of an emergency braking situation, tyre-pressure monitoring system, lane keep assist, blind spot monitoring, ABS, EBD, yada yada. You get a 360-degree parking camera, sensors all around and even parking assist that requires you to only feather the throttle and the brake. The GLC Coupe is for you if you want bragging rights. Of course, the standard GLC has just as much class to it as the Coupe, but the Coupe looks faster. Of course, you do have to shell out something like Rs 6 lakh more than the top-spec standard SUV, but if you’re going to be taking this SUV out on a trip more often than ask the driver to take you to the office, I would say its a decent trade-off.
Stanford Masters
Tags: #Auto #Auto Review #Mercedes Benz GLC #Mercedes-Benz #review #Technology
first published: Jan 19, 2021 05:20 pm