MC Explains | Byju’s: How does it earn money and where does it spend?

On September 14, India’s most-valued startup, Byju’s, posted a surprise decline in revenue, albeit marginally, for FY21, a year that saw the internet sector mushrooming across the world, thanks to stay-at-home Covid-19 restrictions.

The edtech sector in particular emerged as one of the biggest beneficiaries of the Covid-19 pandemic, thanks to surging demand for online education services. Since the pandemic started in March 2020, as many as six edtech startups have turned unicorns as investors poured billions of dollars into the edtech sector, to enable these edtech companies make the most of the pickup in demand for edtech solutions.

In a year like this, for the world’s most-valued edtech company to post a decline in revenues was unusual and would perhaps lead to a tighter scrutiny of companies’ projections by investors going forward, market watchers said. Byju’s also posted what was the biggest loss for an Indian startup - Rs 4,558 crore.

To be sure, Byju’s has raised over $3 billion since the start of the pandemic in equity and over $1.2 billion debt, with its valuation soaring manifold to more than $22 billion. The company said it clocked gross revenue of Rs 10,000 crore for FY22 and is on track to surpass that in FY23. But as the company makes big projections, let’s first do a deep dive into its revenue and expenditures for FY21.

How does Byju’s earn money?

Byju’s said that after readjusting its revenue owing to changes in accounting practices, it deferred about 40 percent of its revenue for subsequent years, and so the company reported a marginal decline in its revenue for the year.

Byju’s profit and loss statement for FY21 showed that the edtech giant earned about Rs 2,280.26 crore from its operations. That accounts for most of its total revenue of Rs 2,428.39 crore. This year, Byju’s changed the way it described its revenue from operations. The company’s FY20 filings had showed that it had generated most of its revenue from the sale of tablets and SD cards. Byju’s had received a lot of flak for it. 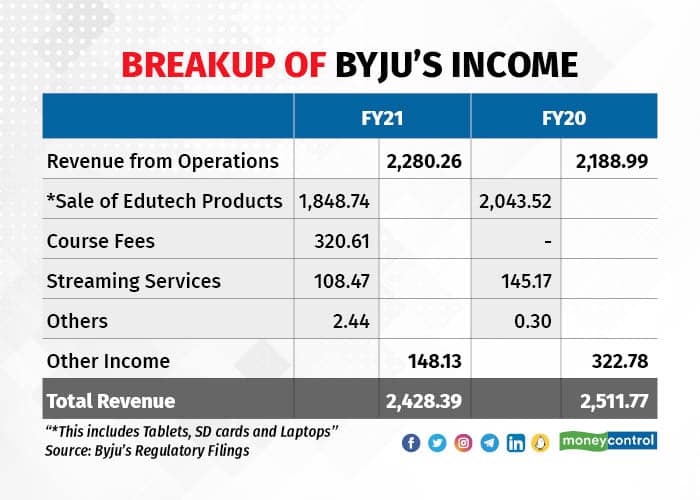 Other than revenue from operations, Byju’s earned about Rs 93.83 crore as profit on sale of current investments, and about Rs 47 crore as interest income on financial assets carried at amortised cost on bank deposits, the company’s financial report showed.

How does Byju’s spend?

In an interview with Moneycontrol on September 14, Raveendran explained how the company’s expenses remained the same even as it had to defer its revenue for subsequent years owing to a change in its revenue recognition method.

Byju’s spent 2.5 times on advertising and marketing over FY20. The company spent Rs 2,250.94 crore on promotional activities in FY21 against Rs 899.34 crore in FY20. The company did not give any notes on it. To be sure, these expenses were for FY21, when the company had not renewed its contract with the BCCI (Indian Cricket Team) or had not even signed as FIFA World Cup’s title sponsor. 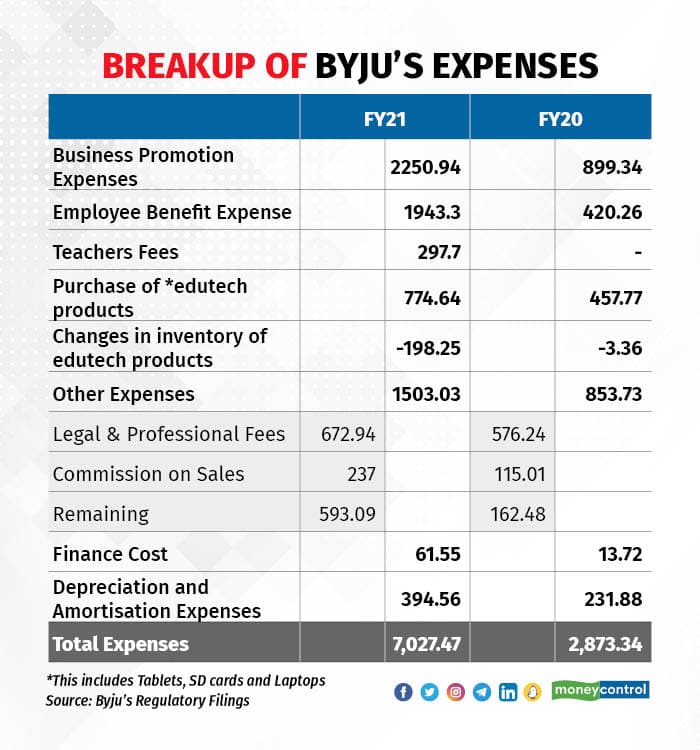 In FY21, Byju’s spent nearly Rs 300 crore as teacher’s fees. The company had none in FY20 and it also didn’t provide any note for it. The company also spent Rs 774.64 crore on purchase of edutech products, which comprise tablets, laptops and SD cards against Rs 457.7 crore in FY20.

Besides the above-mentioned spends, Byju’s’ ‘other expenses’ amounted to Rs 1,503.03 crore in FY21, up from Rs 853.73 in FY20. Legal and professional fees accounted for the largest chunk of ‘other expenses.’ Byju’s spend Rs 672.94 crore on legal and professional fees, that include payment to the auditor, which was up over 4x from the previous financial year. Other than that, commissions paid on sales accounted for Rs 237 crore for FY21, up from Rs 115.01 crore in FY20.
Invite your friends and family to sign up for MC Tech 3, our daily newsletter that breaks down the biggest tech and startup stories of the day