“If this can’t break us, nothing will,” said Byju Raveendran, Founder and CEO of India's most-valued startup Byju's, as he revealed his FY21 (2020-21) financials after a year-long wait.

Due to a change in accounting practises, a significant increase in business was not reflected in the revenue figure, and nearly 40 percent of the revenue was deferred to subsequent years, according to Byju's.

“During COVID, we gave streaming access to a lot of our users because of shipment delays. And that had to be changed. The revenue had to be recognised across the period of consumption,” Raveendran told Moneycontrol in a virtual interaction.

“Secondly, on account of credit sales, EMI (equated monthly instalments) sales, recognition was based on significant collection of that. Revenue was recognised after completion of collection. These were the two additional changes that had to be made,” Raveendran added.

While Byju’s is a privately held company, its financial results drew increased attention as a result of Deloitte's apparent delay in signing off on its results. Deloitte had flagged certain concerns with the way Byju’s was recognising its revenue, delaying the submission of the edtech giant’s results to the MCA (Ministry of Corporate Affairs). Byju's had set at least four deadlines for submitting its results to the MCA, but had missed all of them.

The MCA also requested a response from Byju's in the last week of August as a result of the delay. Additionally, on July 21, Member of Parliament (MP) Karti Chidambaram wrote to the Serious Fraud Investigation Office (SFIO), a statutory corporate fraud investigating agency, asking for a probe into the finances of the edtech unicorn.

Private companies must submit their annual financial results to the MCA by September 30 of the next fiscal year. Byju's has now nearly missed the official deadline for FY21 by almost 12 months, and there are currently just roughly 15 days remaining for the company to file results for FY22 (2021–2022).

Raveendran told Moneycontrol that the reason for the delay in filing its FY21 results was due to three factors. First, Raveendran explained, the company was unable to travel due to COVID, delaying the audit of some of the companies it acquired. He also stated that the complexity of the acquisitions, as well as the change in revenue recognition that Deloitte requested, caused the delay in filing the results.

Byju's unexpected decline in FY21 revenue comes at a time when all consumer-facing edtech companies in India, including those that were shut down, such as Lido Learning, reported a sharp increase in revenue during the year, thanks to an unprecedented increase in demand for technology-based educational solutions. 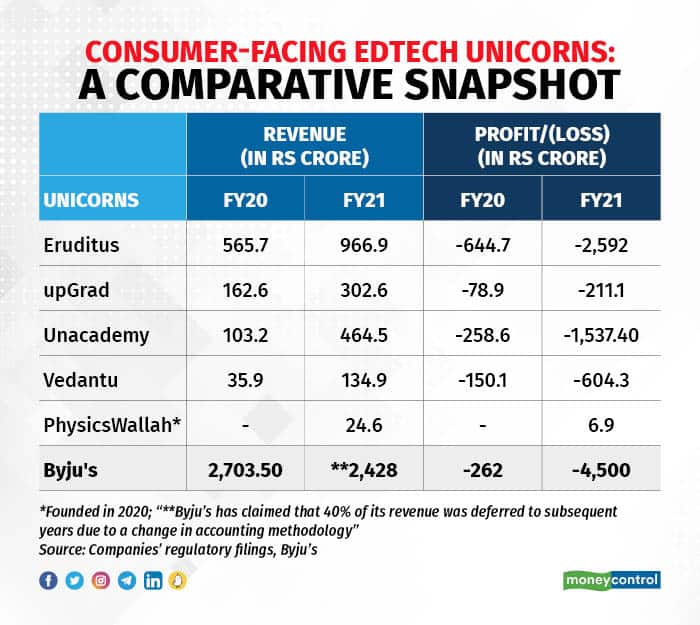 In FY22, the second year of the pandemic, revenues of these edtech companies are believed to have further gone up. For instance, Vedantu’s co-founder and CEO (chief executive officer) Vamsi Krishna had told Moneycontrol that the company’s revenue grew nine-fold in FY22 over FY21. Similarly, Byju’s, too, claimed that it clocked revenue of nearly Rs 10,000 crore in FY22, an almost four-fold jump over FY21. However, these numbers are unaudited as of now.

However, demand for online learning solutions has fallen since the beginning of this calendar year as schools, colleges, and physical tuition centres reopened in the midst of a decline in COVID-19 cases. Byju’s, though, claims to have clocked a revenue of Rs 4,350 crore in the first four months of the current financial year.

The fall in demand for edtech solutions, coupled with a slowdown in funding, has led many edtech companies to actively pursue cost-cutting measures in an attempt to maintain a runway for the near term.

With the exception of Ronnie Screwvala's upGrad and India's newest edtech unicorn PhysicsWallah, as many as 6,000 employees have been laid off by edtech companies since the year 2022 began. Additionally, Udayy and Lido Learning, two edtech firms, have stopped operations.

Like the majority of edtech businesses, Byju's has struggled since the beginning of this year. In an effort to reduce costs, Byju's has let go of close to 2,500 employees. In addition, the company has not yet received $250 million from a few investment rounds it announced since September of last year.

Furthermore, Byju's has been without a full-time Chief Financial Officer (CFO) for about a year. PV Rao, the last CFO employed full-time, quit in 2021. Since then, the company has had an SVP- Finance, Byju's Group, in charge of its financial operations.

Byju's has also been considering an IPO, and reportedly, it was looking to list this year.

Byju's has also been in discussions with major US banks about an initial public offering (IPO) through the flotation of a special purpose acquisition company (SPAC). A person privy to the discussions said the company was seeking a valuation of more than $45 billion.

Raveendran said that the last six months have been tough for the company and he has had sleepless nights, thanks to all the critical media reports that raised a number of questions on operations of India’s most valued startup. However, he said that going forward, he is optimistic about the company and plans on speeding up hiring plans.
Invite your friends and family to sign up for MC Tech 3, our daily newsletter that breaks down the biggest tech and startup stories of the day