Shopee is still advertising a sale event on April 4, at the time of writing this article. Offer letters were also being released till last week, indicating that the transition plans are still not clear at the firm, sources told Moneycontrol.

Shopee, the e-commerce business of Singapore-headquartered internet giant Sea, is retreating from India just months after it forayed into the country, amid mounting pressure from local retailer bodies and “global market uncertainties”

In a notice to sellers, Shopee India said it will be ceasing operations in India from 12 AM on March 29. Following this, buyers will not be able to place new orders while sellers have been given time till May 30 for payment withdrawals and returns. 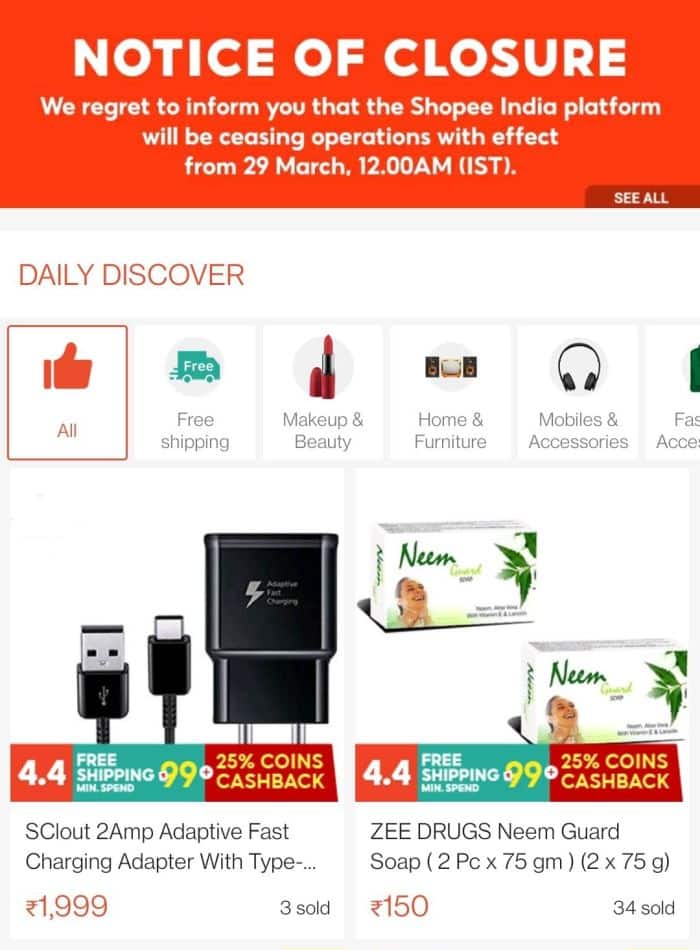 That said, the company assured that prior orders will continue to be processed and fulfilled “as usual” and it will provide after-sales services and support to all users who have made purchases on the platform.

The sellers are however not quite perturbed about this move, as they have been taking inventory off the platform, fearing an overnight ban on Shopee, similar to the one clamped on Chinese etailers Club Factory and Shein in 2020, following another wave of app bans in February 2022.

Strangely though, Shopee is still advertising a sale event on April 4, at the time of writing this article. Offer letters were also being released till last week, indicating the sudden nature of the move, with transition plans still not clear at the firm, sources told Moneycontrol. “In view of global market uncertainties, we have decided to close our early-stage Shopee India initiative. During this period of transition, we will focus on supporting our local seller and buyer communities and our local team to make the process as smooth as possible. We will continue to focus our efforts on delivering a positive impact to our global communities, in line with our mission to better the lives of the underserved through technology” the company said in a statement to Moneycontrol.

This move comes on the heels of the Indian government suspending the popular mobile game Free Fire from Garena, the gaming arm of Sea Limited, as well as the company’s exit from France earlier this month.

“Shopee entered the European region through France. They weren’t able to corner a segment of the market. In India also, we’ve seen they haven’t been able to corner a particular TAM (total addressable market). I’m thinking that’s the reason they’ve decided to move on," said an executive with a rival firm on the condition of anonymity.

That said, Shopee has faced criticism over its alleged links to China. Sea Limited was founded by Forrest Li Xiaodong, a Chinese-origin Singapore national in May 2009. It also counts Tencent as a key investor with about an 18.7% stake. Shopee’s live broadcasts are also carried out on Tencent Cloud which is headquartered in Shenzhen Shi in China.

Shopee’s mobile app has also witnessed a hit in its app rankings in the past week. It was within the top five free apps in India for several months until last week, when its ranking saw a major dip and is currently ranked at number 124, according to data sourced from app intelligence firm Sensor Tower.

Praveen Khandelwal, Secretary General of Confederation of All India Traders (CAIT) welcomed Shopee’s exit, mentioning that they have been raising this demand since September 2021.

“It’s good that saner counsel has prevailed upon Shopee and its parent company. Entry of Shopee was illegal since China shares boundary with India and as per Press Note 3 of FDI policy, it's a complete violation,” he said.

The entry of the likes of Shopee means compromising data and security of Indian citizens, flooding of the market with Chinese goods, anti-competitive tie-ups with large manufacturers with exclusive access – all of which will strike at the belly of our small trader who is already suffering from the impact of COVID on their businesses, Khandelwal said.

The company; however, continues to maintain its headquarters are in Singapore and has also confirmed that it does not “transfer to, or store any data of our Indian users in, China.”

Moneycontrol had earlier reported that the Shopee generated 300 jobs and enlisted 20,000 sellers. According to one person aware of the matter, employees will be given three months' severance pay and more than a hundred employees will be impacted in this exit.

Shopee forayed into the Indian market, six months back and was clocking 100,000 orders a day in India and with over one million app installs on the Google Play Store. The India business was headed by Ankit Upadhyay, who joined Shopee Thailand as the head of supply chain management in February 2020. He was given the mandate to grow the business five to sevenfold in six months.

India has been one of the biggest markets for e-commerce globally. More than 100 millions of India’s estimated 572 million internet users purchase products online, with e-commerce swelling to a $30-billion industry in the fiscal year 2020, according to a report by Bain and Sequoia Capital.