From sticky traps for rats to brass necklaces to Hello Kitty mobile covers, Shopee is heavily focusing on unbranded and fast fashion products besides popular categories like electronics and smartphones in India.

If you thought Indian e-commerce was over the hump when it comes to deep discounting and flash sales, think again. Singapore’s Shopee, which launched with zero fanfare barely a month ago, has left industry watchers astounded even as it draws customers from India’s intensely competitive e-commerce market at a fast clip.

Moneycontrol learns from sources that Shopee, within weeks of a soft launch, has clocked 100,000 orders a day in India and has over one million app installs on the Google Play Store. Industry sources said Amazon and Flipkart average 2-2.5 million orders per day.

Shopee shows signs of emerging as a strong challenger that could potentially chip away at incumbents such as Amazon, Walmart-owned Flipkart, Softbank-backed Meesho, apart from conglomerates such as Tata and Reliance, which also have huge ambitions for the consumer internet space in India.

More than 100 millions of India’s estimated 572 million internet users purchase products online, with e-commerce swelling to a $30-billion industry in the fiscal year 2020, according to a report by Bain and Sequoia Capital.

Rs 99 and below accessories sale!

These are some of the promotions that catches the viewer’s attention on the India app. From sticky traps for rats to brass necklaces to Hello Kitty mobile covers, the company is focussing heavily on unbranded and fast fashion products, besides popular categories like electronics and smartphones in India.

Shopee is doubling down with a focus on order volumes, and is not hung up on the average order value or selling price. It runs four sales a day – at 12am, 12pm, 4pm and 8pm – with offers ranging from Rs 9 to Rs 49 to Rs 99 to Rs 199. It even has products priced as low as Re 1. It offers zero commission for sellers and free shipping for customers. 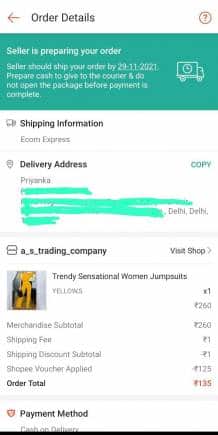 “Shopee is part of Sea, which is a Singaporean company. Our operations are still at a nascent stage and it is too early to discuss specific details. Our local team is currently focused on understanding the needs of our local communities, and assessing how we could be able to apply our global experience to help more local small businesses in India to benefit from the growth of the digital economy in line with our mission to better lives through technology. We aim to be a partner in India’s digital economy mission, while contributing to the Aatmanirbhar Bharat Abhiyan,” a Shopee spokesperson said in a statement.

Moneycontrol also learned that Ankit Upadhyay is heading the India business. According to his LinkedIn Profile, he joined Shopee Thailand as the head of supply chain management in February 2020. He is running a small team from India and has been given the mandate to grow the business five to seven fold in the next six months.

“Shopee usually enters a market late behind other rivals and takes away a large pie in a short span. It overtook Lazada, Tokopedia in Southeast Asia in five years. It is adopting the same playbook in India,” a source said.

“The growth is broadly based on the kind of deals they have. There has been a concentrated effort of advertising on Google Playstore. They have big plans for India,” a second source said.

The company has set out on a hiring binge in India. A search on recruitment sites throws up openings for roles such as marketing associates, campaign managers and content writers that it looks to fill in.

“It is brave of them to enter India in these times especially given the uncertainty around the e-commerce policy. The Indian market is not homogenous. The overestimation of the potential of the market, inability to service the vast semi-urban and rural markets will pose a huge challenge because beyond 200 cities even today, fulfilment issues do come up,” said Ankur Bisen, Senior Partner and Head, Consumer, Food and Retail, at Technopak Advisors.

Shopee, part of the Sea Group, which also has a gaming business called Garena and a fintech play called SeaMoney, was launched in Singapore in 2015, and later expanded across South East and East Asia as well as Europe and Latin America. For the quarter ended September 2021, it recorded gross orders of 1.7 billion and a GMV (gross merchandise value) of $16.8 billion.

Its founder Forrest Li told analysts during the earnings call that globally on Google Play, Shopee ranked first in the shopping category by total time spent on an app, and second by downloads and average monthly active users in the third quarter.

It also continued to be the top-ranked app in the shopping category both in South East Asia and Taiwan by average monthly active users and total time spent on app during the quarter. Shopee was the leading app across these metrics in Indonesia.

Shopee was launched in Brazil barely two years ago and it has already become the most downloaded shopping app in this region, pulling in users with low costs as well as in-app mini-games, where winning users get coupons.

Li also made a passing reference to the India launch during the earnings call. “In the recent months, we launched Shopee in Poland, France, Spain and India. From time to time, we may test the waters in new markets where we believe there may be an opportunity to use our experience in highly diverse environments to reach underserved buyers and sellers,” he said.

The journey in India is unlikely to be smooth for Shopee. The company, which counts China’s Tencent as one of its biggest investors, has made it to the hit list of domestic traders in India. The Confederation of All India Traders (CAIT) has claimed that Shopee’s entry will  send shock waves to the offline traders’ community which is yet to recover from the “unfair trade practices adopted by foreign-funded e-commerce companies”.

On November 15, the Delhi High Court issued a notice, seeking the Centre’s response on a public interest litigation (PIL) that sought to block websites and apps operated by SPINN India Pvt Limited, under the name Shopee.

The petitioner, Shashank Shekhar Jha, alleged that it is a Chinese-backed company that  may have “grave and imminent” danger to security, sovereignty, and territorial integrity of India. He also said it is operating in contravention to the Foreign Direct Investment (FDI) policy and Foreign Exchange Management Act (FEMA).

It remains to be seen if Shopee can successfully pass through India’s regulatory and policy labyrinth, which has tripped up the likes of Amazon and Flipkart in the past.