Corporate sector model too sees a sharp rise of 42.13 percent in NPS contributions.

Contributions made by individuals to the National Pension System’s (NPS) 'All Citizen Model' recorded the maximum jump of 51.29 percent amongst NPS’ schemes, the Economic Survey 2021-22 released by the finance ministry on January 31 said.

Second on the list, in terms of growth, was NPS’ ‘Corporate  Model’, which witnessed a rise of 42.13 percent in contributions, followed by Atal Pension Yojana (38.78 percent), state government sector (28.9 percent), and central government sector (22.04 percent). Overall NPS contributions grew by over 29 percent during the period between September 2020 and September 2021. 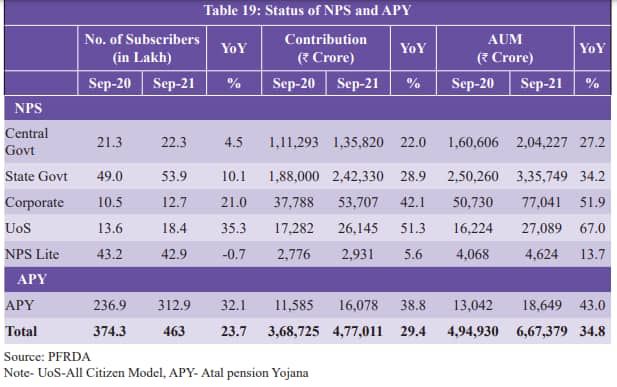 Under the ‘All Citizen Model’, Indian citizens can voluntarily contribute to the NPS to build their retirement kitty. They can claim tax deductions of up to Rs 1.5 lakh under section 80C and additional Rs 50,000 under section 80CCD (1B). NPS was originally introduced for central government employees in 2004 and extended to all Indian citizens in 2009. Under the corporate model, employers can contribute to their employees’ NPS accounts. This qualifies for tax relief of up to 10 percent (14 percent in case of government employees) of employees’ salary (basic plus dearness allowance).

APY, which is targeted primarily at unorganised sector workers, offers a maximum fixed pension of Rs 5,000 per month, depending on subscribers’ contributions. As on October 12, 2021, contributions worth Rs 16,109 crore were collected through this route from over 3.45 crore enrollments.

APY on an upswing?

The Survey notes that APY is seeing an increasing number of subscribers signing up at younger age. “As on September 2021, more than 43 percent subscribers were between 18 and 25 years, as compared to 29 percent as on March 2016,” the survey stated. Rs 1000 seems to be the most popular pension amount being chosen, with around 78 percent subscribers selecting this amount as of September 2021, compared to 38 percent in March 2016. The share of those opting for pension of Rs 5,000 per month continues to be low at 14 percent. The gender gap in the APY subscriber base has been narrowing gradually. A shade less than half the APY subscribers are now women, according to the survey. The proportion of female subscribers has increased from 37 percent as of March 2016 to 44 percent in September 2021.