This pension scheme is a great way to help your domestic staff. And it has done well too

A pension scheme where the monthly contribution till you retire, is nominal. And returns are reasonable. It's a good option to build your domestic help or staff’s retirement nest egg.

A month ago, Moneycontrol gave you easy ways in which you can help someone who has lost a job, daily wages or seen their income diminish.

One more way in which you can help the poor is by enrolling them for a pension scheme that would at least take care of their retirement. Or better still, fund it on their behalf. Take a look at Atal Pension Yojana (APY).

A pension product for all

Designed on the lines of the national pension scheme (NPS), APY is a product where you invest a small sum every month and get a fixed monthly pension income after you retire. The government of India had launched APY in 2015.

APY is aimed at providing financial security to people in the unorganised sector during their post-retirement life. However, any citizen between the ages of 18 and 40 years, with a savings account in banks or a post office account can enrol in it. 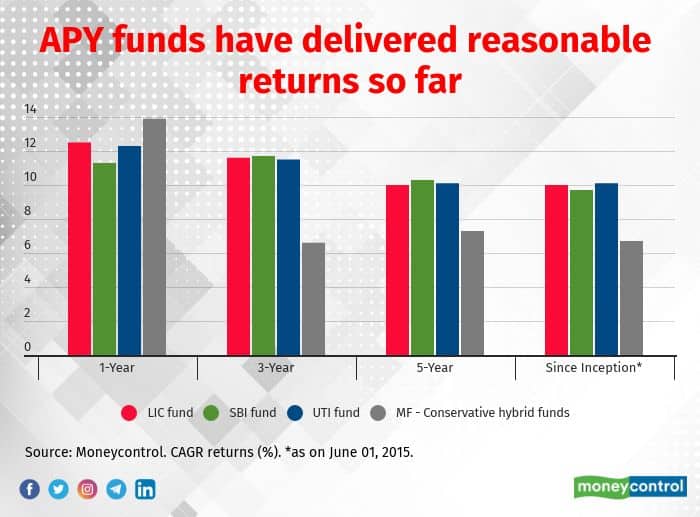 On the death of a subscriber (after the age of 60), the pension will go to his/her spouse. In case of death of both the subscriber and spouse, the pension corpus will be given to a nominee. On death of the subscriber before attaining 60, the spouse will be given the option to either withdraw fully or continue paying the premium for the balance period (original subscriber’s 60th birthday) and then avail themselves of the pension benefit. Premature withdrawal during accumulation period is permitted only in exceptional circumstances.

You can open APY with most banks or post offices. You are given an option to change your desired pension amount once in a year.

The best part is that the annuity is guaranteed by the government. “The government ensures the both the annuity return at seven percent per annum (the pension amount that the subscriber gets) and eight percent return per annum on the premium he pays during the accumulation phase,” says Supratim Bandyopadhyay, Chairman, PFRDA, the regulatory body for NPS and APY.

Currently, they invest upto 15 percent in equities and the rest in debt and money market instruments.

So far, APY has done well, thanks partly to the 15 percent allocation towards equities. UTI, SBI and LIC, have generated a compounded annualised returns (CAGR) of 10.1, 9.7 and 10 percent, respectively. Such excess returns will be passed on to the subscriber. Hence there is a chance of getting higher pension than the assured one.

How does Atal Pension Yojana help after retirement?

Unlike the NPS, you cannot withdraw a portion of your corpus after you retire. Your entire accumulated corpus gets converted into annuities. If an individual joins APY at the age of 18 and makes a contribution of Rs 210 a month for 42 years, it will give her a monthly pension of Rs 5,000 after the age of 60. After her death, her spouse will also get the pension. Later, the nominee of the subscriber will be given the entire corpus, a lump-sum (of Rs 8.5 lakh).

These benefits were specially designed for the target segment. Hence, the APY works better than the other annuity options that you can buy from the market. For instance, for a corpus of Rs 8.5 lakh, the monthly pension provided by the most life insurers under this annuity option currently is around Rs 4,000, while APY assures Rs 5,000.

While APY ensures guaranteed pension for subscribers, the full annuitisation is a drawback for some. For instance, your household help might want to dip into the corpus in case of a medical emergency or to fund a child’s education, which the current framework does not permit.

APY gives the same income-tax benefits as the National Pension System (NPS) does. Apart from the ₹1.5-lakh deduction under Section 80CCD(1), the premium paid in APY can get an additional deduction of up to ₹50,000 under Section 80CCD(1B) of the Income Tax Act. However, the pension receivable is taxed as per the income tax slab of the subscriber.

The high return pension makes APY attractive. Especially given that inflation is typically expected to hover around 6 percent. Ritesh Aggrawal, a Goa-based mutual fund distributor, says, “The higher assured pension of Rs 5,000 seems reasonably attractive, considering that during downturns in the interest rate cycle, guaranteed return products could offer much lower rates. APY can be a supplement to other means of regular income that you may have post-retirement. It is a good idea for both husband and wife to enrol in the APY and get pension of as much as Rs 10,000.”

But APY should not be your only option to get a good pension scheme. Top it up with the Public Provident Fund (PPF), Employees’ Provident Fund (EPF; if you are a salaried employee) and a mix of equity and debt mutual funds. But APY is a good option to build your domestic help’s and staff’s retirement nest egg.