The Indian market benchmarks ended flat with a positive bias, thus ending in the green for the fifth consecutive session, on August 27, amid mixed global cues.

Investors traded with caution on expiry day of the August F&O series. The Nifty ended with nominal gains despite opening above the 11,600 levels.

"The market has been more or less listless in the last two sessions despite a rise in the domestic currency and decline in bond yields. Investors will be eyeing the Fed president's speech at the Jackson Hole Symposium. On August 28, the Nifty could look for support at 11,480 and 11,450 levels while 11,660-11,700 would be major hurdles. The strategy must be to purchase on dips with a final stop loss at 11,350," said Shrikant Chouhan, Executive Vice President, Equity Technical Research at Kotak Securities.

Maximum Call OI of 57.5 lakh contracts was seen at 11,600 strike, which will act as crucial resistance in the September series.

Maximum Put OI of 44.20 lakh contracts was seen at 11,500 strikes, which will act as crucial support in the September series. 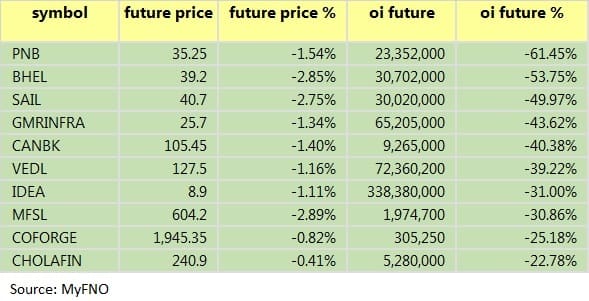 An increase in OI, along with a decrease in price, mostly indicates a build-up of short positions.

A decrease in open interest, along with an increase in price, mostly indicates a short-covering. Based on the OI future percentage, here are the top 10 stocks in which short-covering was seen. 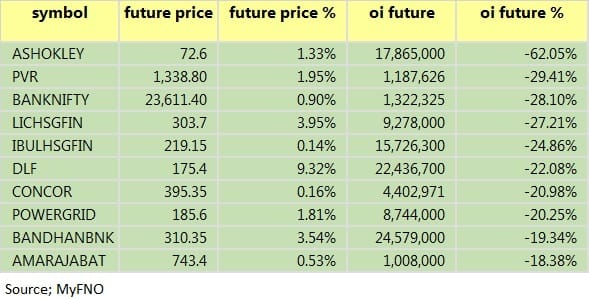 Bulk deals
Mehul Kanubhai Patel bought 1,79,39,973 shares of Banco Products India at an average price of Rs 97 per share through a bulk deal on the BSE. Overseas Pearl sold as many shares at the same average price.

Dhoot Instruments bought 1,25,500 shares of Dhoot Industrial Finance at an average price of Rs 27.50 per share via a bulk deal on the BSE. Aditya Birla Retail sold 1,23,339 shares of the company at the same average price.

Plutus Wealth Management bought 12,47,059 shares of Saint Gobain Sekurit India at an average price of Rs 65.71 per share through a bulk deal on the BSE.

Westbridge Crossover Fund sold 4,07,419 shares of CEAT at an average price of Rs 950 through a bulk deal on the NSE.

Asian Markets Securities and Biyani Financial Services each bought 25,000 shares of Thejo Engineering at an average price of Rs 683.55 per share through a bulk deal on the NSE.

GMR Infrastructure: Consolidated net loss for the June quarter more than doubled to nearly 834 crore against Rs 335 crore loss in the same quarter of FY20.

Mahindra & Mahindra: The company announced the introduction of the Marazzo with BS-VI technology.