Rakesh Jhunjhunwala cautioned investors that one has to be careful of the stocks that you are buying, but there is scope to make a lot of money, but the problem is Indian’s don’t believe in India.

Warren Buffett once said that “Be Fearful When Others Are Greedy and Greedy When Others Are Fearful”. Rakesh Jhunjhunwala, who is also known as India's Warren Buffett, increased investments in April 2020 when the market was dealing with COVID-led uncertainty, he said in an interview with Moneycontrol’s Nisha Poddar.

“In terms of finance, COVID been very lucky for me. I started investing at the bottom of the market in April 2020. And, you know, liquidity is now at its peak. My debt is at the highest level and I don't want to go into any more debt,” he said.

Jhunjhunwal also highlighted that he increased his investments across pharma, telcos, steel, as well as banks. He is bullish on commodities and feels that the commodity cycle could well last for the next 5 years. 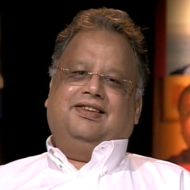 After a sharp run up in the market, Jhunjhunwala cautioned investors that one has to be careful of the stocks that you are buying, but there is scope to make a lot of money, but the problem is Indian’s don’t believe in India. “If fellow India believes in India they will be prosperous,” he added.

(Note: The list of stocks are the ones which he mentioned in the interview and the actual investments made could be more)

“I invested in pharma, and a very large investment in Tata Steel, as well as Jindal steel. There is a lot of money in commodities, and I feel that this commodity cycle is going to last for a minimum of 5 years, and in context of valuations when observed with cash flows – they are still absurd,” explained Jhunjhunwala. In comparison to cash flows, valuations are still absent in commodities, he said.
He invested in Sun Pharma Research Company (SPARC), and in the PSU banking space, Jhunjhunwala likes Canara Bank as well as State Bank of India.

Both Canara Bank, and State Bank of India reported strong earnings for the March 2021 quarter. Canara Bank reported a profit of Rs 1,011 cr in Q4, against a loss of Rs 3,259 cr reported in the year-ago period amid a fall in provisions.

State Bank of India March quarter results surprised the Street. Most foreign brokerage firms raised their target price for SBI after the public sector lender reported an 80% YoY rise in the net profit supported by jump net interest income and other income, and stable asset quality.

Jhunjhunwala is of the view that PSU banks will be the key beneficiaries of the credit growth cycle as India moves towards normalcy. He sees GDP growth to double by 2025 which is a positive sign for markets & the economy.

“I think Credit growth in India, traditionally has been 1.25 to 1.5 times nominal GDP growth. The credit growth which has been 6-7% is going to go to 15%. I see India growing in double-digit this year, and then next year the growth rate could be 6,7,8,9, or 10%. By 2025 India will be growing in double digits – that is my opinion and I have the right to be wrong,” said Jhunjhunwala.

He further added that credit growth will pick up and public sector banks are fully provided towards their provisions and they also have deposit gathering ability.

For State Banks of India – it is a very well-run bank. “If somebody wants to borrow Rs 5000 cr who is going to go to. They are doing very well in the retail space, and their subsidiaries are doing extremely well. Nobody can match their distribution for insurance, retail or mutual funds,” explains Jhunjhunwala.

Read: Rakesh Jhunjhunwala says 4 of his investments headed for IPO; Here they are

Disclaimer: The views and investment tips expressed by experts on Moneycontrol.com are their own and not those of the website or its management. Moneycontrol.com advises users to check with certified experts before taking any investment decisions.
Moneycontrol News
Tags: #interview #MARKET OUTLOOK #Mrket edge #Nifty #Rakesh Jhunjhunwala #Sensex
first published: May 27, 2021 08:41 am