LIVE Now :Watch how Haryana is taking progressive steps towards SDGs only at ‘The Sustainability 100+ Dialogues 2021’-Haryana Roundtable
you are here: HomeNewsBusinessMarkets

The government delivered just what the doctor ordered paving the way for higher growth in the economy and simultaneously giving investors the confidence that the bull cycle is still intact.

In a historic move, the FM announced bold corporate tax reforms. The reduction in the base rate of corporate tax to 22 percent (effective maximum tax rate 25.17 percent) for Financial Year 2019-20 subject to the condition that such companies will not avail any exemption/incentive is one of the boldest tax reforms.

What does the tax rate cut mean for Nifty companies?

"There are only 20 Nifty companies which paid more than 30 percent effective tax rate and accounted for 43 percent of the overall net profit in FY19,” Kotak Securities said in a report.

Fall in taxes will lead to a rise in EPS by double digits which is a positive sign especially at a time when earnings have been muted or largely in single digits for the last 12-18 months.

Nilesh Shah, MD & CEO, Envision Capital in an interview with CNBC-TV18 said that investors should look at buying companies with high tax rates. The other sectors which are likely to benefit are the ones in sectors like consumer, financials and technology services. 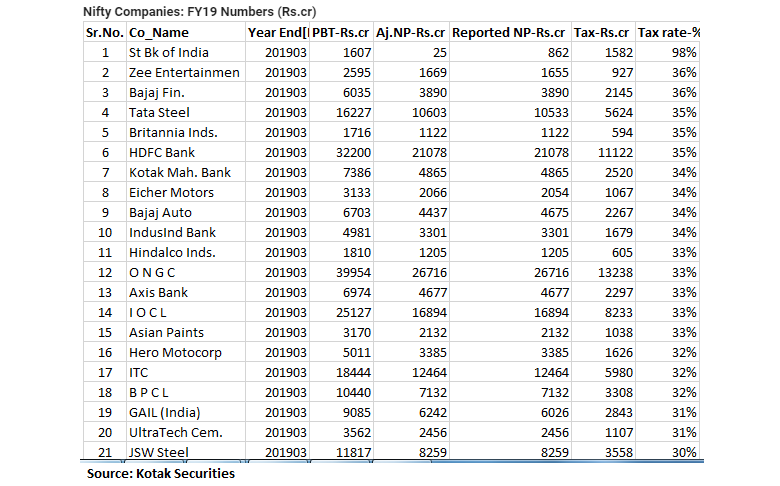 “Any company paying 33 percent tax rate will see its earnings go up by 12 percent. Overall, we can see Nifty earnings going up by ~5-6 percent in FY20 as the effective tax rate was already lower at 26 percent,” said Oza.

He further added that the sentiment booster angle and the way this will be taken positively by FIIs and local investors we can expect the Nifty to rally by 9-10 percent from today’s low of ~10,700. Hence, 11,500-11,600 is very much possible on the Nifty without considering any other factor.

The government has taken a hit on revenues of approximately Rs 1.45 lakh crore per annum by reducing corporate tax for existing companies to 22 percent (25.17 percent effective tax) from 30 percent.

There is a big boost for companies going for fresh capex and make in India as tax rates will be just 15 percent for companies making fresh investment and incorporated after 1st Oct 2019,” Rusmik Oza, Head of Fundamental Research, Kotak Securities told Moneycontrol.