Not only oil marketing and aviation companies' shares but also tyre and paint stocks gained strength in morning on Wednesday after steep fall in crude oil prices.

Crude oil is the raw material for oil marketing companies, so any volatility in international prices directly impacts their earnings.

Even for paint, aviation and tyre companies, oil forms major part of their operational expenses.

Crude oil prices tumbled more than 6 percent on Tuesday in heavy trading volume, with US crude diving to its lowest level in more than a year, caught in a broader Wall Street sell-off fed by mounting concerns about a slowdown in global economic growth.

Oil's slide has been largely unimpeded since early October when WTI prices were near four-year peaks. Since then, WTI has fallen more than 30 percent. (Source: Reuters) 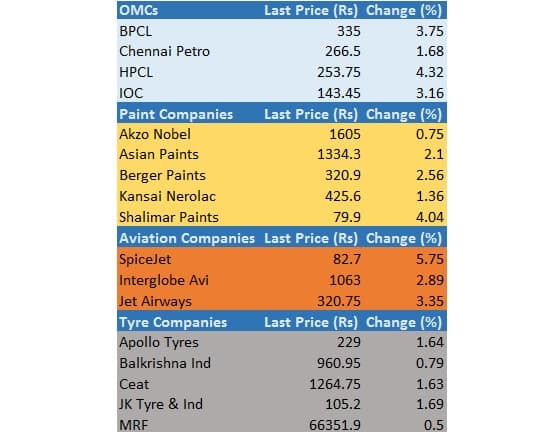 However, oil prices clawed back on Wednesday after seeing sharp fall in previous session. Brent crude futures rose 1.4 percent to $63.41 a barrel and WTI crude climbed 1.42 percent to $54.19 a barrel, at the time of writing this article.