In a world besieged by chaos and uncertainty, the Indian government seems to be playing its cards just right.

With the heady days of the post-pandemic recovery now over for the global economy, the world is staring at a liquidity crisis triggered by strong demand for the US dollar to buy goods and energy, and a lack of money supply.

Assets from cryptos to currencies, stocks to bonds have crumbled under the strain of an aggressive US Federal Reserve sucking out liquidity from the global monetary system and leaving other economies short of it.

The US dollar, often the refuge for investment managers in times of uncertainty, has soared more than 20 percent this year – a two standard deviation move that does not happen very often.

“The energy increases the need for US dollars, but the Fed will remain unwilling to liquefy today’s energy squeeze. Cue, today’s liquidity crisis…,” said Louis-Vincent Gave of Gavekal Research in a recent note.

The increasing strain on the global dollar funding markets have seen weak developing markets like Pakistan and Sri Lanka knock the door of the International Monetary Fund for bailouts. The IMF, often the lender of last resort for economies hurled into a crisis, has given away a record $140 billion in loans to help economies from defaulting on their sovereign debt.

If one jogs his mind back to 2013, a similar shortage of dollars in the world triggered by the infamous ‘taper tantrum’ had seen India’s currency and debt markets crumble while equities ploughed new depths. The Indian economy back then was one of the ‘Fragile Five’ as its widening fiscal and current account deficit troubled economists.

In 2022, India’s position in the global economy is the exact opposite. It’s currency, although, at record lows against the US dollar is still relatively safer than many of its peers. Its economy is expected to grow upwards of 7 percent in 2022-23 and its inflation is still moderate, though still outside the Reserve Bank of India’s comfort zone.

India’s equity and bond markets are considerably outperforming the US, Europe and rest of the Emerging Markets. 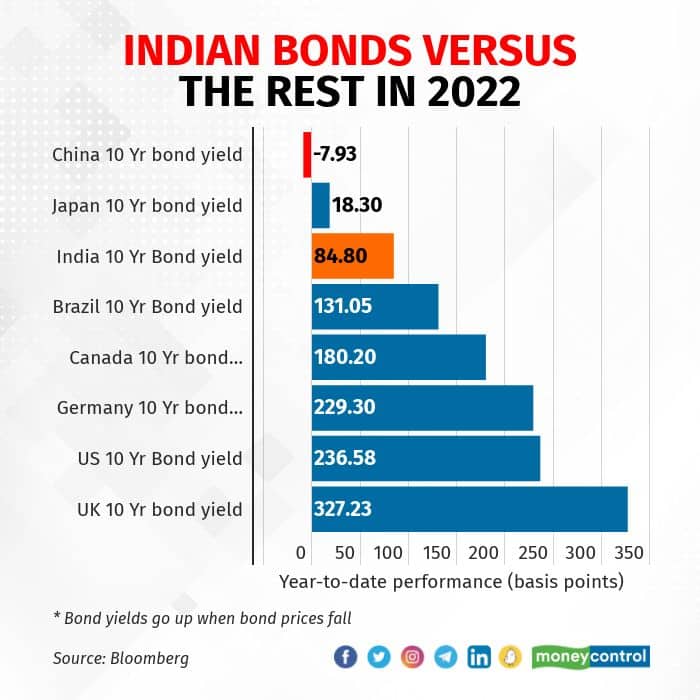 Gave, one of the foremost minds in the world of investment, believes in a rapidly changing global macroeconomic environment, energy will become the most crucial aspect.

The winners of tomorrow will be those who can source energy at the cheapest cost.

India’s move to sharply ramp up its purchase of discounted crude oil from Russia despite pressure from Western economies to abandon such pursuits and the increase in production of coal are two moves that will protect the economy from higher energy costs that is now besieging its counterparts in the so-called West.

Also Read: The end is not in sight

Russia has overnight become the biggest source of crude oil for India, overtaking Saudi Arabia, while also ensuring that its current account deficit is not blown to bits financing the expensive oil from West Asia.

Russian oil now accounts for 19.5 percent of oil imports and is closing in on Iraq’s share of 20.9 percent, as per the data released by the government for July.

…Or Ramp up Use of Coal

And, while Prime Minister Narendra Modi has pledged India’s commitment to becoming a net zero carbon economy by 2070, India has taken several steps recently to boost production of coal in the country and reduce dependence on imports.

Coal remains a cheaper, though exponentially more polluting, source of energy to feed power plants at a time when natural gas prices are at stratospheric levels due to constrained supply-side dynamics.

India has already auctioned 47 coal mines as of June 2022 to the private sector with another 122 mines placed under auction back in March 2022. NTPC, a state-owned company, has revived plans to start commercial mining of coal to boost overall national production capacity.

Board the De-Dollarisation Wagon

Lastly, India appears to be taking a central role in the de-dollarisation of the global economy.

With the West weaponising its financial system against Russia following the latter’s invasion of Ukraine through blocking assets stored with Western central banks, Russia in collaboration with China is looking at an alternative mechanism to trade goods and services.

China’s yuan, according to keen observers of the country, is seen as the only viable alternative to the US dollar given the inherent strength of the domestic economy and the persistent issues that plague the euro due to a weak macroeconomic set-up of the Eurozone.

According to Gave, the obvious solution to today’s US dollar shortage is to shift some of the world trade towards local currencies.

India is already buying Russian crude oil in Rouble terms and is working on an alternative payments mechanism to the US-backed and dollar-dominated SWIFT (Society for Worldwide Interbank Financial Telecommunications).

The 2020s are likely to be remembered for the tectonic shifts it will have caused in the way the world we know functions and India will hope that it emerges as among the biggest winners.
Chiranjivi Chakraborty
Tags: #Market Edge #Market news
first published: Sep 27, 2022 02:31 pm