Indian equity benchmarks outperformed global markets in 2018. In fact, Brazil (up 15 percent) and India (3 percent on Nifty) were only gainers during the year.

The performance of broader market was quite bad in the year gone by as BSE Midcap and Smallcap indices lost 13 percent and 24 percent, respectively.

But 2019 is going to be good for the overall market, experts said, adding the first half could be volatile due to general elections but second half is expected to be good and the focus would be on earnings, macros and global factors.

"Sharp decline in crude prices, appreciation in INR versus USD and fall in Bond yields augurs well for the market, however uncertainty regarding elections in 2019 might keep markets volatile," Equirus Securities said.

Mid and smallcap earnings were hurt more due to crude currency and interest cost increase. "Therefore, reversals in the same should lead to better earnings revival in small and midcaps, hence, we believe that 2019 will be a good year for small & midcaps," the research house said.

Equirus made changes to its model portfolio and expects top 15 stocks to return 5-93 percent over a period of one year.

The research house added Mayur Uniquoters and Whirlpool in its portfolio, and removed Bajaj Auto (as decline in crude prices are likely to impact export volumes) and Sterlite Technologies (due to better opportunity in Mayur). 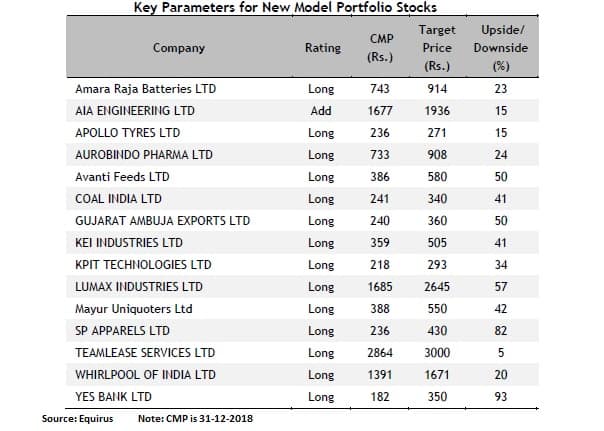 We expect healthy volume growth across segment for Amara Raja. Due to the correction in the lead prices we expect the benefits to come through in the second half of FY19. Company has also announced the capex of Rs 540 crore for adoption of advanced stamped grid technology in automotive batteries. Also the company is in the process of increasing its 4W battery capacity to 12.5mn units.

Due to large order received in FY18, company is well placed to deliver 18 percent volume growth in FY19E. EBITDA per tonne will improve by 8 percent YoY due to decline in chrome prices, in fact there is possibility of beat to our estimates due to INR depreciation.

Apollo is well placed to benefit from strong growth in TBR (truck and bus radial) market in India as it commands pricing premium in TBR market vs other domestic players. Hungary will start showing profit gradually in FY19 and will report strong profitability in FY19.

Bag-line issues should get resolved by Q3. Ensuing quarters to remain strong given limited competition in gErtapenem and Valsartan price hikes. Acquisition of Sandoz's derma biz to start contributing from year-1 of consolidation itself. Integration can take our estimates higher by 20 percent (annualised).

CY18 turned out to be a very difficult year for aquaculture sector mainly due to 1) Sharp fall in the international shrimp prices, which in turn led to 25-30 percent drop in farmgate prices. 2) Key raw materials for shrimp feed i.e. Soymeal and fishmeal firmed up by 15-20 percent in CY18 which led to margin pressure for the feed companies. Though Shrimp culture in India declined by 25-30 percent in Q2FY19, but Avanti Feeds was still able to improve its feed market share to around 45 percent from 43 percent at FY18-end highlighting the strength of their business model.

As RM prices (Soymeal and Fishmeal) have stabilised now and international shrimp prices have started inching up on demand revival in USA, company would be able to improve its operating margins going ahead. After a sluggish FY19, we expect FY20 revenues/PAT to grow by around 26 /42 percent YoY.

Demand momentum to remain strong driven by power, other sectors. Over the last few months, Coal benefitted from lower stock of pit-head coal at power plants. Many non-power sector companies which got linkages in auctions were not getting promised supplies as sales were diverted to fulfill power sector needs; however, now they should drive volume growth as extra demand from power sector eases a bit.

GAEL, one of the leading agro-processing companies in India, with its new plant will become the largest maize processor of country (around 21 percent market share by capacity). We expect GAEL to capture incremental demand of starch and its derivatives, higher value added derivatives shall support margins going forward & also expect utilization levels of oil extraction business to improve hereon. Overall we estimate 17 /23 /20 percent revenue/EBITDA/PAT CAGR over FY17-20E.

GOI's focus on developing world class infrastructure has increased significantly. With initiatives like 'DDUGJY', 'IPDS, 'UDAY', 'Make In India' and 'Housing for All' is likely to spur strong demand for wires & cables.Strong order book with excellent execution capabilities will act a key driver for EPC business.

KPIT has approved a composite scheme for (1) amalgamation of Birlasoft with KPIT, and (2) demerger of engineering business into KPIT Engineering Limited (KEL). KPIT-Birlasoft will focus on IT services business while KEL’s shares will be separately listed and shareholders would receive one share of KEL for every one held in the merged entity. Overall the deal creates value unlocking for existing shareholders with an option to own IT services and ER&D businesses. We believe, KPIT presents an attractive opportunity to ride the Automotive ER&D story in India.

We expect Lumax EPS to grow at 30 percent CAGR over FY18-21E driven by shift towards LED from halogen lamps in automotive lighting. Company is gaining share in HMCL models as later's main supplier has not coped up with technological changes in lighting and is in financial trouble as well. With 68 percent of sales from 4Ws and 28 percent from 2Ws, company has fairly diversified portfolio.

Prices of major raw materials for Mayur Uniquoters — PVC resin, plasticiser and yarn — had risen by around 15 percent in first half of FY19 due to an increase in crude prices and INR depreciation. Now with decline in crude oil prices, raw material prices have also started moderating sequentially (but still up 10-15 percent YoY) which in turn would aid gross margins going ahead in Q4.

Company has also taken a 4% price hike effective from Oct'18. Also, export volumes should exhibit a healthy growth in second half of FY19 after a decline in first half FY19 as de-stocking exercise at USA subsidiary is over.

FY19 will see strong growth in garments revenues with demand from existing customers orders normalizing and new customers giving incremental orders. Garment margins will be aided by rising utilization levels and favourable currency. Retail revenues will continue its revenue growth trajectory on continuous stores additions and rise in same-store-sales growth of existing stores. Retail margins which turned positive in FY18 will further increase on strong sales growth. SPUK will see robust growth on a low base.

TeamLease is a structural and scale play on the formal employment growth in India with market leader positioning (around 6 percent market share) in a fragmented and unorganised market, coupled with asset-light and collect & pay model.

FY19 could be constructive driven by healthy pipeline and improving conversion. Pipeline build-up is being driven by vendor consolidation in few large accounts, while on-boarding of associates for a BFSI customer could help 4QFY18.

Whirlpool continues to deliver strong performance on the back of continued market share gains in WM and refrigerator categories mainly at the expense of Videocon. Extreme focus on distribution network along with new product launches to plug-in the portfolio gaps are likely to act as key volume drivers for Whirlpool.

Stable margins in-light of increase in crude oil prices, rise in raw material costs and weakening of INR against USD by taking timely price hikes and cost saving initiatives. With INR/USD currently at around Rs 70 levels, we expect Whirlpool to improve profitability albeit with a lag towards Q4FY19 and Q1FY20 on the back of recent price hikes, fall in prices of crude oil & key raw materials.

While bond yields have spiked up of late, we believe the spike in bond yields for financial entities will normalise in a month or two given that RBI has been proactive in managing liquidity. Also incremental lending rates have started trending up and pressure on NIMs would moderate in second half of FY19. Divergence from FY18 asset quality review and selection of new MD&CEO remains a key monitorable.

While the overhang event of key person risk has played out, we believe that at around 1.5x FY19E ABV, Yes bank offers a good upside potential from current levels.