In first month of post compensation era, most states see more than 14% growth in GST revenue

As per the law, states were guaranteed 14 percent growth in their GST revenues every year for the first five years of the indirect tax regime, with any shortfall to be made up from the compensation cess fund.

Most states and Union Territories (UTs) recorded more than 14 percent growth in their Goods and Services Tax (GST) revenues in July - the first month of the post-compensation era - data released on August 1 by the finance ministry showed.

As per the data (external link), only 11 states and UTs saw their GST revenue rising by less than 14 percent in July. These included small regions such as Daman and Diu and Tripura but also large states like Madhya Pradesh and Punjab.

As per the law, states were guaranteed to receive 14 percent growth in their GST revenues every year for the first five years of the indirect tax regime, with any shortfall to be made up from the compensation cess fund.

However, this five-year compensation period ended on June 30, with states asking the Centre to continue compensating them for any shortfall in revenues for another two to five years as they feared a hit to their finances amid the economic weakness caused by the coronavirus pandemic.

While the Centre did not respond one way or the other to states' request, its stance has largely been that it would fulfill what the law said. As for what would happen beyond June 30, the talk from finance ministry has been that states were unlikely to require any compensation, as their GST revenues would rise by roughly 14 percent anyway. Data released today seems to back the Centre, with 25 states and UTs witnessing at least 14 percent increase in their GST revenue.

The finance ministry said the state-wise figures do not include GST on import of goods.

To be sure, the growth in GST collections has been helped by high inflation as well as a relatively lower base, with collections in the last two years adversely affected by the hit to economic activity and consumption due to the coronavirus pandemic. 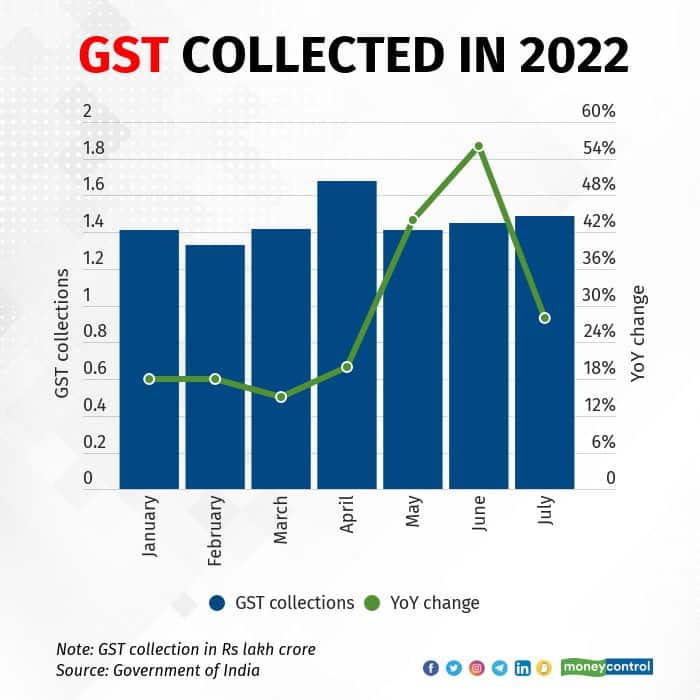 "The new normal of Rs 1.4 lakh crore seen during the past few months accompanied the fact that all major states have shown a growth in excess of 15 percent over the last year," noted MS Mani, a partner at Deloitte India.

This, according to Mani, indicated that economic activity had stabilised and leakages plugged, which should provide "some comfort to states which have just come out of the guaranteed compensation period and are concerned about their revenue mobilisation abilities".

According to Aditi Nayar, chief economist at ICRA, Central GST for FY23 may exceed the Budget target of Rs 6.6 lakh crore by Rs 1.15 lakh crore. If all states and UTs benefit similarly, the debate on compensation may end quickly.
Siddharth Upasani is a Special Correspondent at Moneycontrol. He has been covering the Indian economy, economic data, and monetary and fiscal policies for nine years. He tweets at @SiddharthUbiWan. Contact: siddharth.upasani@nw18.com
Tags: #Economy #Finance Ministry #GST #taxes
first published: Aug 1, 2022 04:02 pm