Street art: When in Philadelphia, pause and gaze at the murals

Walking in the mural capital of the world is like browsing through an outdoor museum. Here are six murals in Philadelphia which certainly deserve a closer look

Keith Haring's mural 'We Are The Youth' at 22nd and Ellsworth Streets in Philadelphia, the US. The mural was restored in 2013 by the Philadelphia Mural Arts Program. (Photo: Keith Haring artwork © Keith Haring Foundation via Wikimedia Commons.)

In 1984, Mural Arts of Philadelphia, the US’s largest public art programme, began creating murals on the walls of the city’s buildings, to help eradicate graffiti. No surprise then that there are more than 4,000 towering murals in the city now, earning it the moniker the Mural Capital of the World. Over the years, the Mural Arts of Philadelphia have designed several walking tours to explore the murals across the city, including a self-guided tour, to take in the murals, some of which have been done by the likes of Keith Haring. But for a visitor passing through briefly, it’s best to explore the murals as you walk around the city. There are plenty of visual surprises if you look up at buildings and walk over to parking lots. Just remember to step into small stores along the way, the ones that sell local products. They are quaint and invigorating to browse. One of the stores I entered sold exquisite stationery and paper products. Its Irish owner was helpful and generous with information about the city. “Try and get lost,” he said, “for that way you will come across some of the prettiest murals which may not even be on the map.”

Here are some of the famous murals I discovered on my walk. Along the way, I spied several murals which weren’t listed on the map but made for delightful viewing. If you want to make the most of the mural walk, it’s best to do the north and south of the Market Street. Together, it’s the iconic Mural Mile. The artist who gained worldwide attention for her portrait of former First Lady Michelle Obama, later made a large-scale mural for Philadelphia. The majestic six-storey-high portrait, located on 1108 Sansom Street in Center City, of a black teenager girl is quite unlike the ones seen in the city. Sherald, who usually paints American people, specifically African-American people going about their lives, painted the artwork in her inimitable style. The mural is the portrait of Najee Spencer-Young who gazes down at passers-by, her almond-shaped eyes maintaining direct contact with the viewers. The blue background is the perfect backdrop for the student’s black and white floral coat paired with a mustard-coloured hat. Sherald described the mural as an opportunity to boost the self-esteem of teenagers like Spencer-Young. A gorgeous multimedia mural, on Broad and Lombard Streets, close to the Kimmel Center for the Performing Arts is on a pretty nondescript wall. About 1,500 litres of paint, 10,000 glass pieces, 5,000 pieces of marble and a tonne of concrete — that’s what it took to create a narrative that represents people’s different roles. People striking dramatic "Michelangelo mural" stances are at home with two powerful hands wielding the marionette sticks. These hands symbolise the external influences that control the people. It takes some time to study the richness of the mural.

Pride and Progress by Ann Northrup (2003) 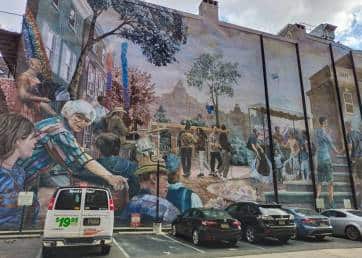 Ann Northrup is a city-based muralist and painter who has done a few large murals, two of which are in what’s called the Mural Mile. Pride and Progress is an exceptionally long and large work (55 x 165 inches) done on the entire west wall of William Way Center, a LGBTQ community centre, on 1315 Spruce Street. Not surprisingly, the mural depicts a gay pride festival with some of the city’s landmarks in the frame. At one side, there is a man pasting a poster of gay civil rights march held in 1966, giving a significant and historic landmark to the mural. This mural is on the Mural Mile and shows an idyllic summer day where people from the neighbourhood are spending time with each other, be it eating a meal together or chatting in front of their homes. If there is one thing you wish to do on a lazy summer day, it’s breaking bread with friends and family on a shady terrace. The landscape is an idealised one, a combination of Perugia, Italy and Lancaster County, Pennsylvania. Aptly, the mural is on the side wall of a restaurant called Vetri Ristorante. 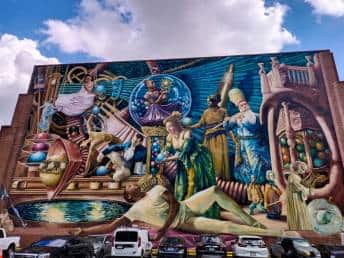 Meg Saligman is a well-known muralist and artist from Philadelphia. Of the many murals she has painted, Philadelphia Muses is almost a landmark, located on the 13th and Locust streets. The artist has painted contemporary interpretations of classical muses all across the mural, starting from the bearded man with a flute on the right signalling sound to the woman in the white robes symbolising the muse of movement. The man on the ground in a contorted pose is the muse of invention. Saligman painted this mural in her studio on giant squares of parachute cloth which were later adhered on the wall with acrylic gel. Artist David Guinn has painted about 40 murals in the city and part of those are four murals based on the seasons. Spring, created in 2000 and restored in 2017, on 1315 Pine Street, is the last of the Seasons series and is not so big as some of the other murals in the city. However, it makes up with its charm and colours and almost blends in with the trees around it. The trees in the mural are sharply defined yet has a soft impressionist feel. Superbly rendered, the Guinn’s mural is a sight for the eyes, and has been restored twice so far. The 7,500 sq. ft mural, on Broad and Spring Garden streets, has been described as Philadelphia’s most iconic landmarks in contemporary muralism. It is rich in visual metaphors and showcases contemporary real people pairing up with figurines and mimicking their poses. At the centre, the artist painted a solitary girl, Tameka Jones, who was a student at the Philadelphia High School. There are a lot of visual metaphors in the mural but pressed for time, I could spot one — a young African-American couple, clad casually in denims, look out from the balcony on the left side while the right alcove has a porcelain couple dressed formally in courtly robes.