The effective corporate tax rate in 2017-18 has risen to 29.5percent, a good three percentage points higher than a year ago and is the highest in the past five years

Early in its tenure, the Modi 1.0 government had declared its intention to lower the corporate tax rate to 25percent from 30percent. Investors were overjoyed as corporate profits would increase, buoying earnings and valuations, while companies would have more leeway to invest back in the business.

There is good reason for this gradual descent to a lower corporate tax rate.

The effective tax rate paid by the bigger companies has been much lower than what the smaller companies pay. The ETR is the tax divided by the profit, showing how much of profit is actually being paid out as tax. In 2013-14, for example, the ETR for all companies was only 23.2percent compared to an average statutory rate of 32.4percent.

If the government were to cut the statutory tax rate to 25percent for all companies, the ETR would fall even lower.

The government has tackled this anomaly by imposing a higher minimum alternate tax and phasing out exemptions, which has begun to work. The chart alongside shows that companies in the Rs100-500crore bracket have seen their effective tax rate increase to 28.6percent in 2017-18, a good 5.5percentage points higher than in 2013-14. That partly explains the government’s decision to cut the basic rate for this bracket. 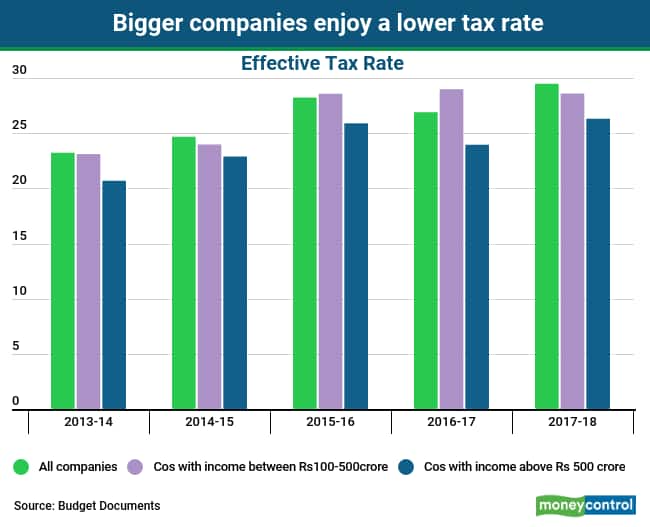 So why did they stop at Rs400crore and not till Rs500crore. They can do it next year and claim to have cut rates. Also, there is a possibility that the Rs400-500crore companies face a much lower ETR than the Rs100-400crore category.

Does that mean the prominent listed companies will never see the 25percent income tax rate? Not necessarily. This year’s Budget brought some good news. The overall ETR for companies in 2017-18 has risen to 29.5percent, a good three percentage points higher than a year ago, and it is the highest in the past five years. If that sustains, it should give the government confidence to lower rates further. That’s a comforting sign that the government’s measures to improve the ETR are working.

The companies with income above Rs 500 crore too have seen their ETR increase, but are still relatively low at 26.3percent. Still, that’s 6 percentage points higher than in 2013-14. Once this rate crosses the 29percent levels, the government may consider cutting rates in this category too. For now, one could expect the Rs400-500crore category getting a tax rate cut.