UPCOMING EVENT:Are you 45+? Planning for retirement? We have just the right webinar for you - Planning for Retirement with Life Insurance on 27-Jan, 3pm. Register now!
you are here: HomeNewsOpinion

Farmers’ protests, and the repeal of the three farm laws are not the only factors that will influence the 2022 poll results in Western Uttar Pradesh. The scars of the 2013 Muzaffarnagar riots, and counter polarisation are important factors

On November 29, the Bharatiya Janata Party (BJP)-led National Democratic Alliance (NDA) government passed a Bill to cancel the three farm laws that were passed in Parliament in September 2020.

The Narendra Modi government has gone back on its proposed agriculture reforms with a hope that it would neutralise the impact of the year-long farmers’ protests in western Uttar Pradesh (UP), and prevent the Samajwadi Party (SP) and the Rashtriya Lok Dal (RLD) from gaining a political upper hand in the assembly elections that are to be held early next year.

Jats account for 10-25 percent of the population in these districts. They have a standalone influence in 35-40 assembly seats, on which the RLD is likely to contest in alliance with the SP. This region also has a minority population of around 26 percent, which is more than the state average.

Together, the Jats and the Muslims become a potent force in Western UP with a population anywhere between 25-60 percent. Their vote could be a deciding factor in 76 assembly seats, a little over one-fifth of the house strength of UP (403). This is where they become a significant force. The Jats have been traditional backers of the RLD, while the minorities have been consolidating behind the SP in recent polls. Since the 2013 Muzaffarnagar riots, the Jats have been backing the BJP in the 2014, 2017, and 2019 elections. In 2017, the BJP swept the region bagging 65 of these 76 seats. 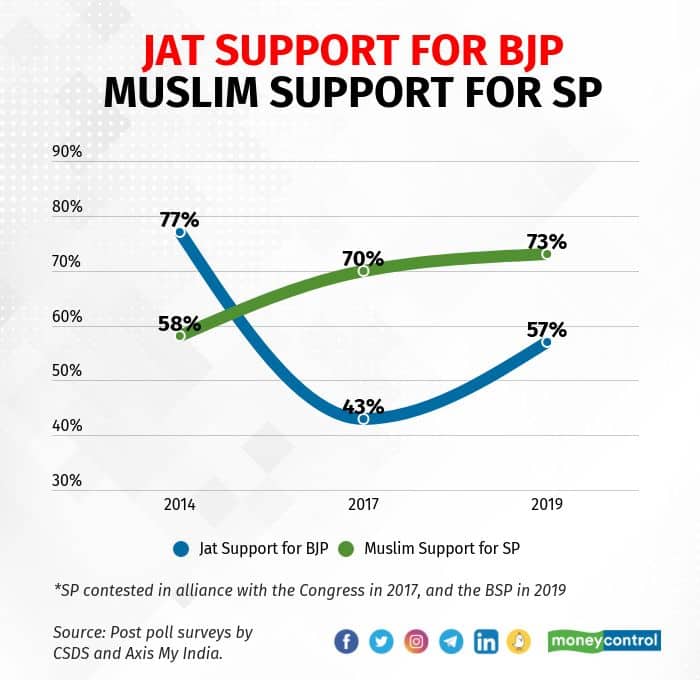 It’s fairly complex to gauge the impact of the farmers’ protest, and its subsequent repeal on the political dynamics and equations in the region. Farmers of the region have been up in arms against the farm laws, and the BJP. However, the repeal may force a rethink among a section of Jats, who could stick with the BJP (as they have done since 2014).

Former Prime Minister Chaudhary Charan Singh created this voting block of the Jats, and the Muslims. Members of the minority community used to work as labourers in agriculture fields owned by the Jats. Thus, their fortunes were intertwined, and from the 1970s till the 1990s they largely voted in tandem.

Charan Singh’s son Ajit Singh’s flirtatious stints with the BJP, and his opportunist moves from socialists to the Congress to the BJP created suspicion among the minorities. The two groups, eventually, began to drift apart. The Muzaffarnagar riots further strained ties.

A proposed RLD-SP alliance on the pretext of farmer protests is an attempt to bridge this trust deficit between the Jats and the Muslims to defeat the common enemy, the BJP. However, the scars run deep, and overcoming suspicions on both sides would not be easy.

The Jats are well off landlords, and rich farmers, and are not specifically liked by the poor and backward Hindu communities. The Jats joining hands with the Muslims in the region has the potential to create counter polarisation which the SP-RLD alliance needs to be cautious of.

Such polarisation may help the BJP consolidate votes in the name of Hindutava, and deflect attention from failures on price rise, unemployment, agri/rural distress, and even reports of COVID-19 mismanagement.

The region also has a sizeable Dalit population. Consequently, the Bahujan Samaj Party (BSP) has good support in Western UP, and surveys suggest that BSP chief Mayawati is still holding onto her core vote block. A division in the opposition vote could help the BJP in this region.

It is because of these nuances that initial opinion polls still show the BJP leading in Western UP. The C-Voter gives it 40-42 seats. A complex interplay of a tumultuous ties between the Jats and the Muslims, antagonism among other Hindu voters, the Dalit factor, Hindutava, would determine the impact of farmers’ protests/repeal on poll outcome in Western UP.

In the next few months we will need to watch which direction the agitation takes from here. Can Tikait keep alive the protests by demanding a guarantee of MSP? Would the Jats take the apology of the Prime Minister and move on? Only time will tell.
Amitabh Tiwari is a former corporate and investment banker-turned political strategist and commentator. Twitter: @politicalbaaba.
Tags: #Farm Bills #Farmers protest #India #Moneycontrol Research #UP elections #Uttar Pradesh Assembly elections
first published: Nov 30, 2021 12:33 pm