Bihar Election 2020: A lower turnout is good for the incumbent. It shows that people who are unhappy with the government’s performance are not angry enough to go out and vote against the incumbent

Voting for Phase 1 in Bihar took place on October 28. At 55.69 percent polling, the turnout is greater than what was seen in the 71 assembly constituencies in the 2015 state polls and the 2019 general elections. This makes the Bihar elections more interesting.

Bihar has historically witnessed lower turnout than national average. The state recorded turnout of 56.6 percent in the 2015 state elections. During the general elections its voting percentage was more than 10 percentage points lower. After the introduction of EVMs, the turnout in the state has nosedived signalling bogus voting in previous years.

This is the first election in India after COVID-19 hit the world. The election commission has taken a number of steps to ensure safe and sound polls. The number of booths has been increased by a third, separate voting hours provisioned for the symptomatic voters and the postal ballot system has been extended to the elderly and COVID-19 patients.

Despite all this arrangements, there is a possibility that the fear of contracting the virus will keep people away from voting. This could result in lower voter turnout. If this is the case, who will benefit from this?

Generally, a lower turnout is good for the incumbent like the latest state elections in Gujarat, Odisha, Delhi, and Telangana. It shows that people who are unhappy with the government’s performance are not angry enough to go out and vote against the incumbent—the absence of a viable alternative could also be a reason.

A higher turnout is normally associated with a vote for change.  We have seen this in the last round of elections in MP, Rajasthan, UP and Assam. If turnout increases, it implies a high level of anti-incumbency. As per a CSDS survey, only 38 percent of the respondents wanted another term for Chief Minister Nitish Kumar.

So, effectively there are two conflicting trends at play: the fear of COVID-19 and a mood for change, which will impact voting percentage, and hence the results. A clearer picture will emerge in the next two phases.

Elections in India are decided on hawa or in whose favour the wind is blowing. Opinion polls suggest the hawa is in favour of the National Democratic Alliance (NDA), while crowds at Rashtriya Janata Dal (RJD) leader Tejashwi Yadav’s rallies suggest it is in favour of the Maha Gathbandhan.

Momentum plays a key role in influencing the voting pattern of undecided and swing voters. The Maha Gathbandhan has reduced the big lead which the NDA enjoyed during the general elections from 26 percent to just 6 percent now, according to the CSDS opinion poll.

The Bharatiya Janata Party (BJP) offering to create 1.9 million jobs in the state, to match Yadav’s promise of 1 million, and Kumar’s jibe’s at the RJD leader are signs of nervousness.

The BJP’s ploy to distance itself from Kumar to negate the impact of his waning popularity is an attempt to not give away the momentum to Yadav who is gaining traction among youth. About 1.2 million first time voters have registered to vote this time.

Google trends of Kumar vs Yadav in Bihar for the past one month shows Yadav catching up, again highlighting that the Opposition is gaining momentum. 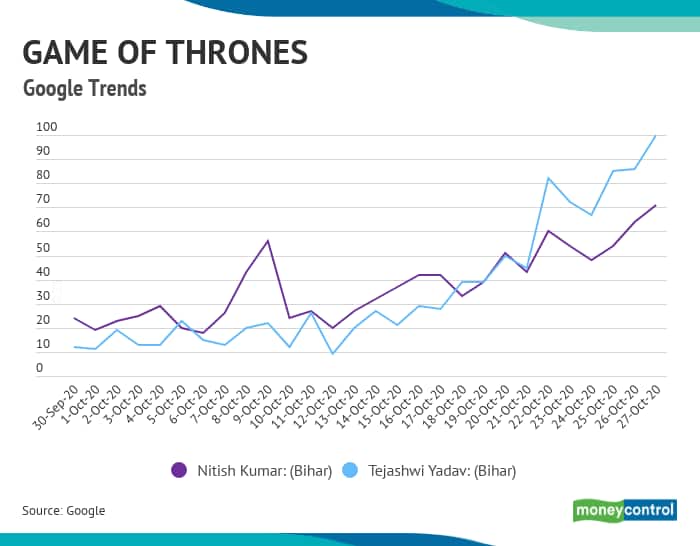 As per the CSDS survey, 10 percent voters have still not made up their mind as to who they will vote for. This is in line with the national trend where these 12-15 percent undecided voters decide on the day / few days before voting.

Additionally, 14 percent respondents said that they could change their voting preference before voting day. These swing voters along with undecided voters make up roughly one-fourth of Bihar’s voting population.

This highlights that there is some confusion, and doubt in the minds of a significant part of the electorate.

The undecided and the swing voters normally go with the hawa. What happens between now and the polling days could play a key role in determining the final outcome.