If India has to become a major force in the solar power space, it must first begin to deregulate the power generation and power distribution sectors even further.

Last week, Prime Minister Narendra Modi said that the International Solar Alliance (ISA) could take over as the dominant energy policy determining forum from the Organisation of Petroleum Exporting Countries (OPEC) in the future. ISA, a grouping of 121 nations mostly located in the solar resource rich area between the Tropic of Cancer and Tropic of Capricorn, was conceptualised by India and France in 2015.

Speaking at ISA’s first assembly, Modi said: "In the future, we must endeavor to ensure that there is one sun, one world and one grid. This will eliminate the energy poverty of the world as the sun is always shining somewhere."

He may be right for three reasons.  First, there is a disruption coming in the world of energy from solar capacity. As Stanford University futurist Tony Seba argues, electric vehicles, battery storage, and solar power are a perfect example of an exponential process which can wipe fossil fuels off the market in about a decade. Second, India and China are likely to remain the biggest players in the solar energy field in the decades to come.  Third, India heads the ISA and therefore could have a strong voice in formulating its policies.

But there are challenges that ISA and India will have to confront.

First, the funds committed for the grand vision could be inadequate. ISA has often stated that the funds required would be close to $1 trillion by 2030 for the massive deployment of solar energy. The $1.4 billion line of credit that India has extended for solar projects in 27 countries might be woefully inadequate. After all, ISA has 68 countries who have signed the ISA framework agreement. Apart from these there are other members who have ratified this agreement and prospective members making a total of 121 members.

Second, India has begun emulating Germany, which was the world’s biggest champion for solar power. India has some advantages over the European nation: Its solar footprint is higher with more sunlight, more land mass and more rooftops than Germany. It has also solar energy potential of nearly 750 GW. However, despite these advantages, India still lags Germany’s installed capacity of 53 GW; currently solar capacity in India stands at 23 GW out of total installed capacity of 345 GW.

True, India's solar targets may look impressive. It is targeting almost 100 GW of solar power by 2021-22. Of this, 60 GW is slated to come from large and medium scale solar projects and the rest from rooftop solar. But it is still small. China, the leader in this industry already has 131 GW of installed capacity. What is also embarrassing is that India will not be able to meet its target of 100 GW by 2021-22.

The way ahead is clear. If India has to become a major force in the solar power space, it must first begin to deregulate the power generation and power distribution sectors even further.  True, the government has already decentralised power generation. There are more private power generators than there were, say, 20 years ago.

But power generators need markets, and so far the government is unwilling to allow generators to find their own customers.  They must sell only to the grid, and it is the grid that then distributes the power through distribution companies or discoms. However, barring very few exceptions, almost all major power distributors are state-owned companies.

These discoms, because they want to play handmaiden to state governments, allow power to be sold to the rural sectors and to needy people at highly discounted rates.  The state does not reimburse the cost of these subsidies to discoms which then run into losses.  Moreover, almost every discom runs into the problem of power theft which gets disguised through mis-declaration as electricity supply to agriculture. 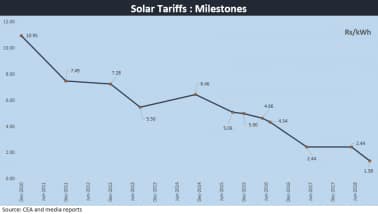 Thus, even though India has managed to bring down the tariffs for solar power, it has not been able to pass on this benefit to its consumers – both common households and to industry. Householders pay Rs.6-8 per unit of electricity.  Business and industry pay Rs.8-14 per unit for their power needs.

As a result, power-intensive industries remain uncompetitive. Demand growth hasn’t taken off as needed and private investment has been flagging.

In fact, India could easily manage to both augment solar power installed capacity as well as reduce the cost of power supply in India if it allows the private sector into distributed cluster power generation and distribution – with iron-clad guarantees that investments will be protected.  Thus, power distribution to rural areas would come from local power generation units, both managed by private entrepreneurs, and not the government.

This would result in hundreds of entrepreneurs entering the sector even from rural communities. It would create around 80 million jobs within a couple of years and make India a vibrant and true leader of the ISA. Today, it has the trappings of a leader, with tremendous potential, but without the performance.