Selected Articles from
Financial Times on Moneycontrol Pro
Upcoming Webinar :Register now for 'ULIP as an investment during economic recovery' powered by Bajaj Allianz
you are here: HomeNewsBusinessStartup

When Sibasish Mishra started Bookingjini, a software-as-a-service provider to hotels, in Bhubaneshwar in 2016, it looked like a strange choice. But now, its services are availed by 500 hotels in 5 states alone, and it has raised Rs 6 crore so far. An investor told Mishra: “I don’t know about your product, but your conviction to build it from Bhubaneswar had us sold.”

Note to readers: What are the next Zomatos and Flipkarts of India? What if they are growing in the hinterland, out of earshot and away from eyeballs? India does have such startups but they struggle for attention or are not thrilled with the limelight. Small-Town Startups is a series of articles that shines a light on enterprises focussed on customers based in India’s tier-2 cities, townships and other non-metro centres.
Had Sibasish Mishra took a planned flight to Hyderabad in 2016, the startup world, would, perhaps, have missed a good Tier-II city story.
Mishra gave that flight the miss, and Bookingjini was born in Bhubaneshwar, his hometown. Now, four years later, Mishra doesn’t regret that decision. In fact, he has good reasons to be upbeat.
As a startup that provides software as a service to hotels, Bookingjini is now present in almost every state, except in Kerala and Jammu and Kashmir. Outside India, it is present in Bangladesh, Bhutan, New Zealand and Sri Lanka.
Close

What made Mishra set up Bookingjini in Bhubaneshwar?
Bhubaneshwar is a curious choice. It hasn’t produced a startup of a significant scale yet, and most travel startups like MakeMyTrip, Oyo, and Travel Triangle are based in New Delhi.
Though lower costs, remote hiring, and the home comforts of a small city may not look like a bad idea, the reason Mishra chose Bhubaneshwar was entirely different.
On that day, when he was slated to travel to Hyderabad -- a potential headquarter – a chance meeting with a man named Subroto Bagchi turned out to be a tipping point.
Bagchi, co-founder of IT services firm Mindtree, who was working with the state government at the time to promote the Make-in-Odisha initiative, cajoled Mishra to open shop in Bhubaneswar itself. Bagchi also hails from Odisha.
“He encouraged me to start from my roots. And I realised I want to bootstrap this for a few years, for which starting at home makes even more sense,” Mishra says.
He didn’t take the flight to Hyderabad.
Today, 80 percent of Bookingjini’s 35 employees are based in Bhubaneshwar, and they were hired two-thirds cheaper, compared to a metro city.
Mishra and the idea of Bookingjini

Forty-one-year-old Mishra, a graduate from Xavier Institute of Management, Bhubaneshwar, noticed something interesting about boutique hotels a few years ago.
He observed that they are heavily dependent on Online Travel Agencies (OTAs). More interestingly, the websites of these hotels, despite being a bare-bone placeholder most often, and often a relic from the early internet days, received 500-1,000 views a day.
“Even the lousiest website got many views. I traced a pattern here. Customers were visiting these websites only to confirm whether the hotel they found on an OTA is real or not. And then they will go back and book on that OTA. Why can’t I give the hotels their own sales funnel and drive traffic for them?” the business mind in Mishra started working.
Mishra is no greenhorn to business. From 2009-16, he ran ‘5 Elements’ from Bengaluru, a technology services firm that provided outsourcing, e-governance, support and training. Prior to that, he had spent nearly eight years in ICICI Bank and ICICI Prudential Life Insurance in Mumbai, the last position being an Associate Vice President with the insurer.
What does Bookingjini do?
It takes over the booking, distribution and digital marketing jobs from hotels for a subscription fee.
Compared to hotels which manage every aspect of running the show themselves, and in analog mode, outsourcing key functions to a software company has its benefits.
Depending on how much a hotel wants to use it, Bookingjini can help connect all the rooms of a hotel to OTAs, monitor rates and bookings, enable self check-ins and check-outs, allot rooms faster, order room service from smartphones, and provide a secure mobile key for each user.
Its other software products also help monitor prices from competition, enable dynamic pricing, and help in marketing with chat bots, visualising customer data, and making the booking process seamless.
How did investors support a Tier-II startup?
For small-town startups, raising funds is tougher. Being in Mumbai, Delhi or Bengaluru brings its own level of access, networking events, pitches and heightened awareness about all things startups and their funding.
Another reason why founders and investors hesitate investing in smaller cities is that they believe that for technical talent -- the backbone of most internet startups -- Tier II and III cities don't have enough quality people. 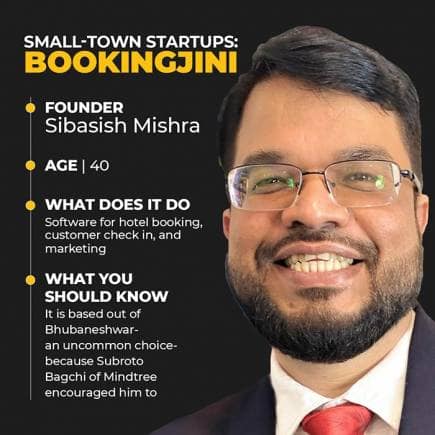 Mishra has a different experience.
Of late, investors are going the extra mile to find startups from the hinterland. “They are looking for new models, beyond well-known cities, and a break from the clutter,” Mishra says.
Mishra’s own experience is a classic example. From May 2017 onwards, after a year of bootstrapping, he has raised Rs 6 crore from Mumbai Angels and Kapil Chopra, former President of Oberoi Hotels, and currently the CEO of Postcard Hotels and Resorts.
At Mumbai Angels, where you have to pitch to different sets of investors, one investor told Mishra: “I don’t know about your product, but your conviction to build it from Bhubaneswar had us sold.”
How is business during COVID times?
Not surprisingly, the going is tough now. Bookingjini’s revenues, which used to be Rs 25 lakh a month in February, dropped to Rs 4-5 lakh during the lockdown months. It is now at Rs 10-12 lakh, and Mishra expects to hit the pre-pandemic levels by January next year.
Also, Bookingjini has competition – from domestic and international players. Accel-funded Hotelogix, Axis Rooms, Siteminder and Staah, the software partner for Airbnb, are a few. In a sector like this, there is no reason even a US-based company cannot expand to India, or an Indian company cannot expand abroad, given that the core service and issues are mostly the same, and, hence, a solution is replicable across regions.
But Mishra is still upbeat and says that the core product – digitising hotel bookings and enhancing guest experience -- is as strong as ever.
He believes the market is large enough for multiple players and that Bookingjini's specific offerings -- in marketing, customer relationship management (CRM) and distribution engine -- is unique enough to grow.
“Our team is motivated to create a large company from here. I may move some functions to a city like Gurugram, but this will very much be our base and core. And once there is a spark, hopefully, others in the city will get inspired,” he says.

Looking at Bookingjini’s journey so far, with a presence in over 100 hotels each in Punjab, Himachal Pradesh, Odisha, Rajasthan and Uttarakhand alone, that spark seems to have been lit.