On the back of a new management team, improving fundamentals, exit from non-core businesses and a better product mix, the company’s prospects are undoubtedly promising.

In Q1 FY19, the company’s sales fell year-on-year (YoY) mainly because of a high base (in FY18, purchases were preponed to Q1 owing to GST implementation from Q2), reclassification norms as per accounting standards, and an increase in taxes YoY (GST versus Value Added Tax). Cost control steps and debt repayment were the key contributors to operating/bottom-line margin expansion, respectively. 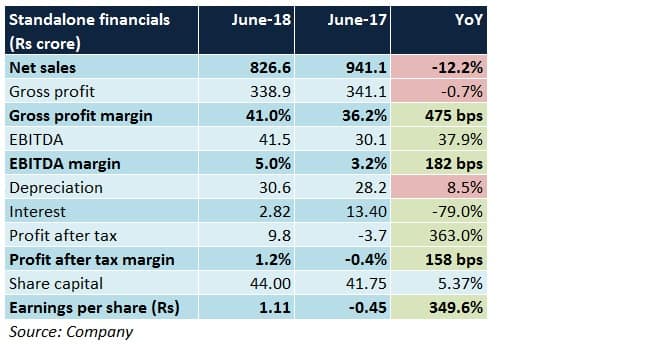 Integration of operations with Amazon will bolster the visibility of Shoppers Stop as a brand. Presently, 80 percent of the company’s products are already available on the e-commerce major’s website.

To facilitate network augmentation, 5-6 ‘Shoppers Stop’ large format stores are likely to be added every year.

As far as own brands are concerned, investments are being made to set up design studios and testing labs. This will be crucial in achieving the objective of doubling private label sales over the next 3 years.

Impetus towards high-value branded beauty products is gaining traction. This is evident from the management’s intent to launch 10-12 outlets in due course.

Growth in the company’s ‘First Citizen Members’ Club’ (constituting roughly 77 percent of the annual top-line) has been pretty encouraging and is expected to continue.

Among other segments, women’s ethnic wear sales have grown substantially year-on-year, whereas demand in the luggage and watches categories seems to be picking up too.

What can boost margins?

The contribution of private label brands to total sales, that currently stands at 10.2 percent, is likely to gradually increase to 15 percent or more in the upcoming years.

Repayment of long-term debt in entirety has been targeted by the end of FY19. Proceeds from the sale of the erstwhile ‘Hypercity’ outlets to Future Retail will be primarily used for this purpose.

Capex of Rs 120 crore has been allocated for adding new stores and refurbishing some existing ones. Since this will be funded through internal accruals, savings in interest costs should keep the strain away from the bottom-line.

Home products (4.5 percent of revenue), which is a breakeven business, have been witnessing good sales momentum of late. Benefits of operating leverage could kick in as this segment keeps expanding.

Any concerns that merit attention?

A decline in footfalls at the offline outlets may be witnessed owing to adoption of the online retailing model (through the Amazon tie-up).

Lower-than-anticipated same-store sales growth has been a sore point for the company since quite some time.

Recently, there has been a sharp decline in men’s formal wear sales.

Though the number of gift voucher days have reduced, extended ‘end of season sale’ periods during the peak phase (second half of the fiscal year) may cause margins to contract.

After facing numerous headwinds in the past, Shoppers Stop is at the cusp of a noticeable turnaround. On the back of a new management team, improving fundamentals, exit from non-core businesses and a better product mix, the company’s prospects are undoubtedly promising.

However, a glance at the price movement of the stock over the past year suggests that it already trades in the upper range of the chart. At 37 times FY20 projected earnings, though near-term upside is limited, we remain bullish on the company’s ability to reap the benefits of its turnaround strategy in the long-run.