Portfolio must-haves? 11 stocks to buy in the ongoing correction

While markets continue to analyze the impact of the macros, it is time to deep dive into fundamentally strong ideas that should be gradually accumulated in this weak phase with an eye on long-term returns.

The ongoing slide in stock prices has singed the portfolios of even the savviest of investors. On the brighter side, the fall has moderated the valuations of some of the quality stocks which had gotten expensive. As the adage goes, “every crisis is also an opportunity”. We have identified a set of stocks that have corrected disproportionately compared to their fundamentals, and so offer a better margin of safety.

The market is facing multiple headwinds like political uncertainty to high crude prices, weak rupee and the possibility of interest rates rising. Global factors like a surge in US bond yields, foreign fund outflows and geopolitical tensions are also keeping buyers on the tenterhooks.

While it is hard to say how these developments will eventually play out, it is time to look into some fundamentally-strong stocks that should be gradually accumulated in this weak phase with an eye on long-term returns.

Aditya Birla Fashion & Retail (ABFR) is among India’s largest pure-play fashion and lifestyle companies. Growth in lifestyle brands and declining losses in the fast fashion sub-segment are the key triggers, in our view. Retail stocks, more often than not, tend to trade at a premium, and ABFR is no exception. Nonetheless, unlike its peers (Trent, V-Mart, Raymond), which have rallied sharply over the past year, ABFR has corrected by nearly 24 percent from its 52-week high. Despite expensive valuations, we believe the stock can rise.

Ceat has benefitted from improving demand and anti-dumping duties on Chinese truck and bus radials (TBR). The company is currently operating at full capacity, but is preparing to meet extra demand. New capacity of 200 million tonnes a day in the TBR segment is expected to become operational in the third quarter of FY19. Further, greenfield expansion at Chennai is also on the anvil and is expected to start in FY20. On the back of concerns over raw material prices, the stock has corrected about 33 percent from its 52-week high, making it a decent buy at its current price.

Dalmia Bharat, the fourth largest cement manufacturer in India, posted strong earnings for the March quarter. The company benefitted from high double-digit volume growth and better realisations. Profitability improved quarter-on-quarter as the company was able to keep a check on expenses with stricter cost controls. Dalmia Bharat has been consistently outperforming its peers and gradually expanding its market presence, both organically and by acquiring other companies. Investors should track this stock, as it has fallen around 15 percent since January this year.

Dhanuka Agritech’s current price looks attractive after a 39 percent fall in the last 12 months. The company’s growth story remains intact. We expect consistent earnings growth backed by a good product mix, a strong line-up of new products, low penetration of herbicides and fungicides in India, favorable macro-economic and policy environment for agricultural companies, and finally, forecast of a good monsoon. However, these tailwinds may be partially countered by the pressure exerted by rising raw material cost in the near term.

Federal Bank reported a weak set of numbers for the March quarter, hit by high fresh non-performing assets (NPA) following RBI’s revised asset quality rules. Business growth was decent, although the performance of core fees and deposits, especially the low-cost franchise, is yet to match that of larger private-sector peers. The bank has confidently guided for a much better FY19 in terms of profits, citing stronger growth momentum, decline in fresh NPAs, and falling credit cost. The stock has corrected 36 percent from its 52-week high and looks reasonably valued at 1.2 times its estimated book value for FY19. 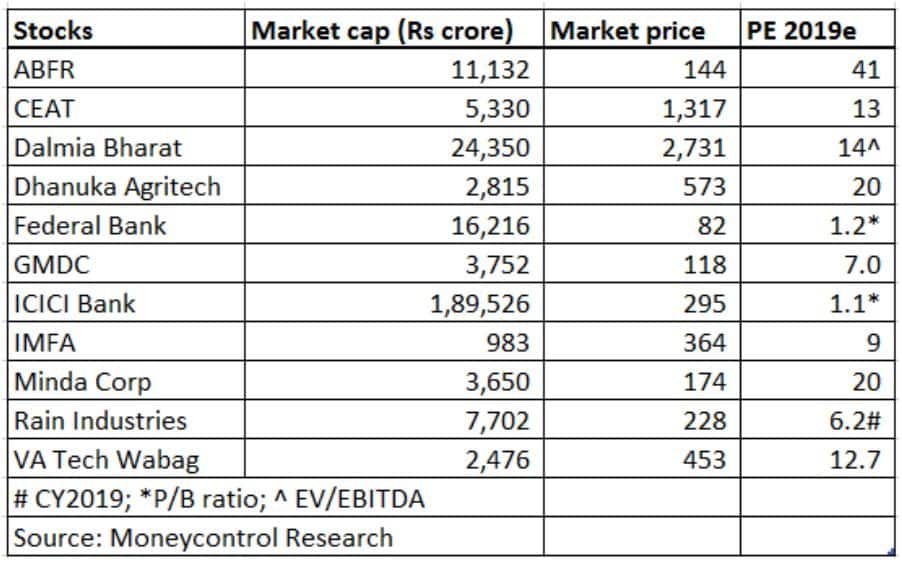 GMDC has the market worried about its volume growth, and the stock has corrected 32 percent in the last six months. It is now trading at 7 times its estimated earnings for FY19, offering a dividend yield of 3 percent. In spite of the Street’s apprehensions, the company reported a 17 percent year-on-year growth in revenue and a strong 52 percent rise in net profit for the March quarter, led by higher volumes and better realisations.

ICICI Bank, over the past few years, has steadily diversified and de-risked its asset book, while building up an enviable base of depositors. Asset quality issues may persist in FY19, and cost of funds may remain high. Still, the bank’s more-than-adequate capital will help it grow its earnings and limit the damage from poor asset quality. With the stock currently trading around 1.1 times the estimated book value for FY19, it seems to have factored in these concerns, and the possible returns from it outweigh the risks.

IMFA reported a weak set of numbers for the March quarter as falling chrome prices impacted profitability. The stock corrected 33 percent in a month and 40 percent over the past three months. However, chrome prices have recovered to some extent, and demand is being supported by a firm outlook for the global and domestic steel industries. Moreover, most of these concerns have been factored into the stock price. Today, IMFA’s market capitalisation at Rs 988 crore is less than its net worth of Rs 1,246 crore.

Minda Corp, a diversified auto-component manufacturer, remains an interesting stock to look at because of its strong operating performance and huge order book of around Rs 1,200 crore. Further, the management’s guidance for exports bringing in Rs 500 crore of revenue by FY20, the company’s expansion plans, and the turnaround in the Minda Furukawa joint venture, adds to our conviction. Given the recent correction in the stock amid weakness in midcaps, Minda Corp’s valuation looks attractive.

Rain Industries, one of the biggest manufacturers of carbon products in the country, reported disappointing quarterly numbers due to delayed shipments. This led to the stock reacting disproportionately. It is now trading at 50 percent below its 52-week high and at 6.2 times its estimated earnings for 2019, is at a significant discount to its peers. Further, fundamental drivers remain intact and the company benefits from positive end-market trends, capacity expansion, tax reforms in the US, higher product realisations, and an expected ramp up in aluminum production capacity in the US.

VA Tech Wabag: India faces an acute water crisis and has sub-par water infrastructure, thereby presenting a good opportunity for this specialised water treatment company . It is a multinational player in the water treatment industry with market presence in India, which accounts for 54 percent of revenue, and abroad. The stock, which is down 40 percent from its 52-week high, has been facing headwinds on account of weaker order intake in FY18, and the risk of missing the order intake guidance. Other negative cues are a decline in the company’s order book and higher working capital, especially in the case of APGENCO orders. Despite these concerns, there are early signs of a pickup in order wins. The stock, which is trading at 12.7 times its estimated earnings for FY19, appears reasonably priced.