Wanted: A KV Kamath for the mutual fund industry to nurture women managers

Just about eight percent of the fund managers are women. Being fully tuned in, avoiding long breaks and a welcoming organizational culture would help bolster their numbers

For a Rs 30 trillion industry, there are surprisingly few women managers. Just about eight percent of the mutual fund (MF) managers in India are women, as per data compiled by Morningstar. The figure hasn’t changed much in the recent past. As of the end-2020, just 28 of the 352 mutual fund managers were women.

What’s the reason for the abysmally low percentage of women fund managers in the Indian MF industry?

Fund management is a demanding job

Lakshmi Iyer, 44, chief investment officer-fixed income and head of products at Kotak Mahindra MF says that the fund management role is demanding. It’s a frontline job, she says, where your performance is constantly scrutinised. “Unless we are determined and passionate about this, the drop-out levels will be high,” she says. 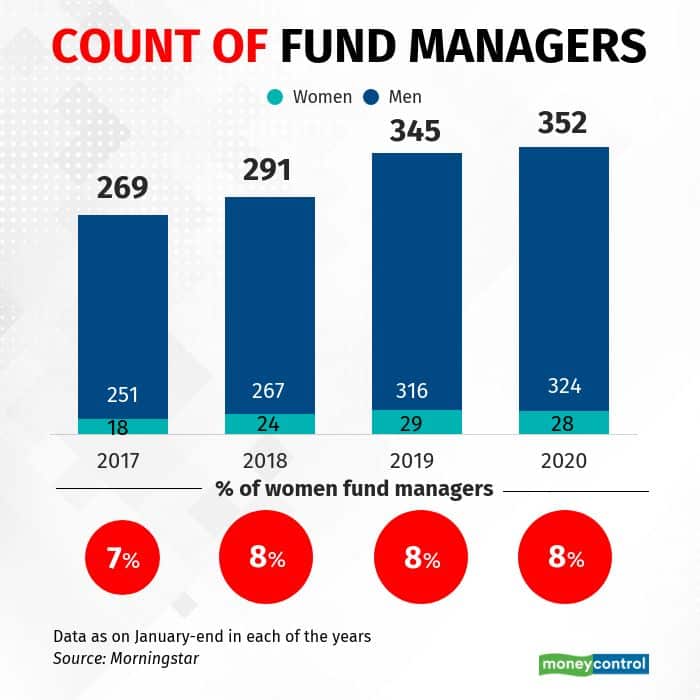 Swati Kulkarni, Executive Vice President and Fund Manager-Equity at UTI AMC, says that the situation has improved since the time she began her own career more than 27 years ago. There may be fewer women fund managers, but Kulkarni says that there are many women in investment teams across fund houses. “But I agree, it is a demanding job,” she adds.

Iyer says that fund managers have to be alert at all times and not just during market hours. By the time Indian markets open, it’s already mid-day in Singapore and Japan. When it’s our mid-day, London markets open. And when our day ends, the US markets start trading. “As a money manager, we cannot treat this as a 9-5 job. Implications, as a result of international market actions, are almost instant these days,” she adds.

It has been difficult for women to break into the fund management roles because, in her observation, women have had to prove their capabilities for the managements to “take a leap of faith,” says Sohini Andani, fund manager at SBI mutual fund. Andani joined SBI MF in 2007 as head of research and was made a fund manager in 2010. She states that many women are interested in fund management; it’s incorrect to assume that women aren’t.

Reshma Banda, Head – Equity and Senior Vice President- Investments, Bajaj Allianz Life says that the number of women in fund management has gone up since the time she joined the industry 20 years ago. But the numbers are still low, she adds. "It has also to do with the job profile and the mindset. It is perceived to be a male-dominated space – money management was not perceived as a traditional role for women. So, there is some hesitation unlike in case of professions like doctor, teacher or even lawyer."

Many women take a break during their careers to raise their children. Lakshmi says that they have to be careful to ensure the break doesn’t extend for too long. “A six-month break can quickly extend to six years,” she adds.

Iyer recollects that after giving birth to her son in 2005, she rejoined work in 30 days. “I was working till just about a day or two before he was born. My doctor told me to go to hospital immediately, as I was in labour,” she adds. She has only one child.

A mother of two, Kulkarni, says that a strong home support is essential for a women to focus on her career. She says she was fortunate that her husband’s place of work was in the same campus where they used to live. Her husband works in a government organisation whose offices are inside Mumbai’s IIT–Powai campus. “Whenever there was an emergency, my husband could reach home within two minutes,” she recollects.

Industry observers say that how welcome women employees are in an organisation, also depends a lot on how inclusive the top management really is. Radhika Gupta, chief executive office, Edelweiss mutual fund, credits KV Kamath, former managing director of ICICI Bank, who encouraged women in leading roles at the bank and the ICICI group. “There is no KV Kamath in the Indian MF industry,” she says.

As a woman CEO herself, Gupta has brought about subtle changes to make women employees feel more welcome and comfortable at work. For instance, bonus payments are not cut for women with a proven track record, even if they are on a maternity break. Cultural diversity is encouraged and some senior women employees are a part of an informal ‘mentor circle’ that junior women employees can reach out to, for guidance.

Gupta says that the work-from-home situation in COVID-19 pandemic times has ensured that women don’t need to take a break for too long. They can work just as efficiently from home as anyone else would.

Kayezad E Adajania heads the personal finance bureau at Moneycontrol. He has been covering mutual funds and personal finance for the past two decades, having worked in Mint and Outlook Money magazine. Kayezad was the founding member of Mint’s personal finance team when it was set up in 2009.
TAGS: #Mutual Funds #Womens Day 2021
first published: Mar 8, 2021 09:33 am