How much will RBI’s new 50-bps rate hike pinch you as a borrower?

The fresh hike in repo rate is likely to have a market-wide impact on borrowers as existing EMIs, as well as new loans, are set to become costlier. The rate hike has given momentum to rising FD interest rates.

This is the fourth consecutive repo rate hike  in this financial year. With the latest round of rate increase, the cumulative hike since May 2022 now stands at 190 bps.

“The low-interest rate regime is now over. We're headed towards a period of the high cost of borrowing. The fresh hike in repo rate is likely to have a market-wide impact on borrowers as existing EMIs, as well as new loans, are set to become costlier,” says Raj Khosla, Founder, and MD, MyMoneyMantra.com.

The hike might be steep but was widely expected. “This rate hike is along expected lines as the central bank aims to rein in inflation, maintain global interest rates parity and ensure the stability of the currency,” says Dr Samantak Das, Chief Economist and Head of Research and REIS, JLL, India. Retail inflation has been hovering above the upper limit of RBI’s tolerance band – 6 percent – since February 2022, with the August number coming in at 7 percent.

Interest burden to rise for new and existing borrowers

All floating-rate retail loans sanctioned by banks after October 1, 2019 are linked to an external benchmark, which is the repo rate in most cases. So, home loans linked to repo rates would have the quickest transmission of increased policy rates. “The transmission of the increased policy rates to existing home loan borrowers would depend on the interest rate reset dates fixed by their banks as per their lending guidelines,” says Gaurav Aggarwal, Senior Director, Paisabazaar. So, the festive season will not be all bright and sparkly for borrowers this year.

“The prevailing rate for a new home loan borrower after the current 50 bps hike would be higher than pre-pandemic levels,” adds Arun Ramamurthy, Director, Andromeda Sales and Distribution. Under the external benchmarking regime, all banks have to review their repo rate-linked lending rates every three months.

Also read | With home loan rates going up, is it time to move to fixed-interest-rate loans?

“The interest rates for existing home loan borrowers will go up from the reset dates set by their lenders. Till then, they would continue to repay their home loans at existing interest rates,” says Aggarwal.

Lenders would increase the interest rates of existing floating rate home loans linked to MCLR or other rate-setting benchmarks as and when the increased repo rates start pushing up the cost of funds for the lenders. 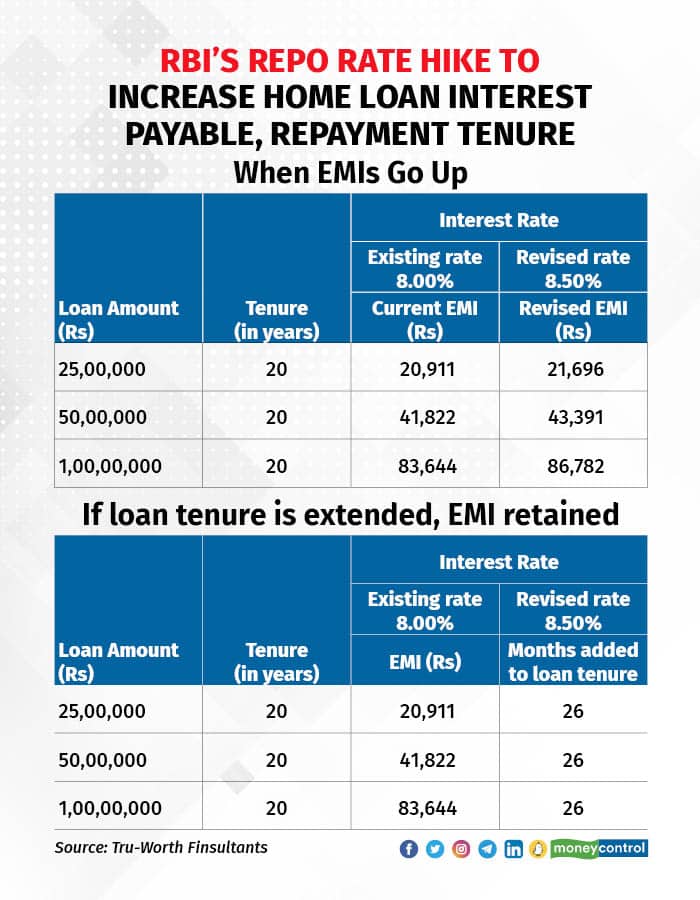 “The EMI burden has shot up substantially in the past six months and its unprecedented – this is about 15 percent (approximately) increase in their EMIs in just a short period of time,” says Vipul Patel, Founder, MortgageWorld, a loan consultancy firm.

Between May 2022 and October 2022, the repo has gone up by 190 bps. The full impact of this hike on a Rs 30-lakh home loan would mean EMIs going up by Rs 3,540 and overall interest to be repaid over 20 years going up by Rs 8.5 lakh. Adhil Shetty, CEO, BankBazaar.com, says, “We have crossed the point of easy repayments. The August hike itself indicated that the time for tenor extensions is over. With this hike, borrowers can expect their EMIs to go up.” This will be especially severe for those who have not made any prepayments on their loans. Larger loans will entail higher interest payouts. For instance, the revised repayment period for a Rs 1-crore home loan with an interest rate of 8 percent and original tenure of 20 years (240 months) will be over 22 years (266 months). This means that the interest payout over this period will rise by close to Rs 16 lakh. “If the EMIs are increased instead, you will have to shell Rs 2,354 more every month. The overall increase in interest burden will be Rs 5.6 lakh,” says Patel.

What’s more, you will also need to brace yourselves for further hikes. “This is not the last increase for this fiscal year and the consumer should be prepared for about a 50/75 bps hike between December and March 2023. So, home loan borrowers need to tighten their belts to deal with the higher interest outgo,” Patel says.

Long-term loans like home loans allow you to make part pre-payments. In a rising interest rate environment, rethink your home loan repayment strategy and consider making pre-payments to save on rising interest cost. Just an extra few thousand every month can reduce your interest payout over the long term.

You must look to prepay lump-sum amounts ― by dipping into bonuses or liquidating sub-optimal investments ― in the initial years to reduce interest cost. If lumpsum pre-payment is difficult, voluntarily increasing EMI by 5-10 percent or paying off one extra EMI every year can also go a long way in cushioning the impact of the rate hike. For instance, in the earlier example, if you were to make a part prepayment of Rs 1.34 lakh now, you can continue paying the same monthly instalment till the end of the loan tenure.

These four consecutive rate hikes since May 2022 have given momentum to rising fixed deposit (FD) interest rates. The era of low FD rates is now certainly behind us. The rate hike momentum is expected to continue for some more time.

“While the probability of hitting double-digit rate in near future is low, it is clear that FD interest rates are slated to hit 8 percent, and are inching towards the 9 percent mark,” says Shetty. He adds that while the rate transmission is slower in FD rates, reduced liquidity may spur the increase in FD rates. Nevertheless, more upward movement is expected in FDs and laddering FDs would continue to be a good move for the next few months.

“As fixed deposit rates are expected to increase over the short term, consumers should also avoid auto-renewal facility while booking their fixed deposits,” Aggarwal says. This might allow to renew of fixed deposits at higher interest rates, after factoring in the highest interest rate slabs available at the time of renewal.